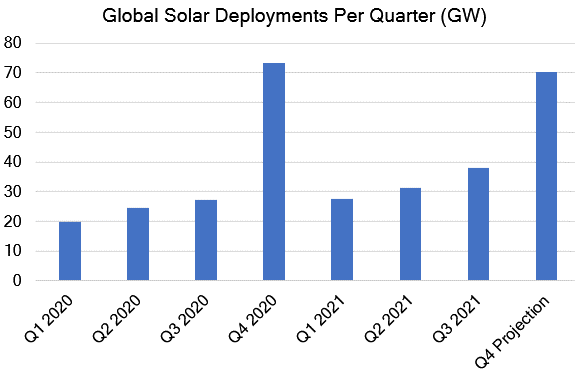 The midyear polysilicon price spike will make itself felt in installations made in Q4 overseas, with import figures already declining in some markets in Q3. Meanwhile in China itself, which is a third of the global market, the even steeper polysilicon hike in September will weaken the customary Q4 utility-scale surge – which last year was 22 GW, but the still-subsidized rooftop sector is picking up most of the slack. 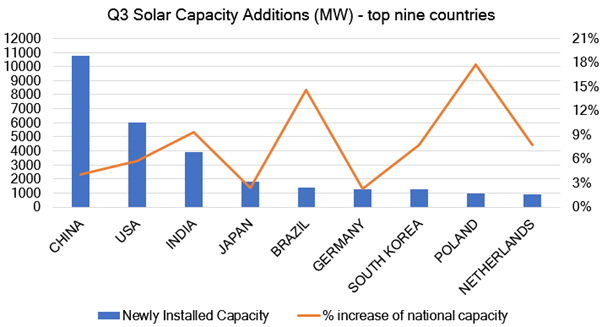 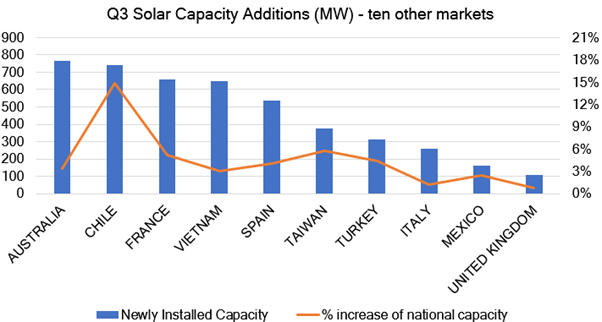 Compared to previous quarters there are more countries than usual with a very high increase over their installed capacity bases this quarter – with Poland, Brazil, and Chile all increasing their total solar capacity by over 15% in just three months.

China installed 6.9 GW of distributed solar in Q3 and 3.8 GW of utility-scale.  Installations are up 30.5% year-on-year for the first nine months of the year and up 50% for Q3 itself. Utility-scale deployments are down by 10%, rooftop up by a massive 83%. In the fourth quarter we expect Chinese utility-scale deployments to be down 30% compared to the 2020 Q4 spike of 22 GW, as there is no subsidy deadline and that sector is hit harder by module cost increases. Within the rooftop segment, residential has come to the fore while the commercial segment has at best maintained itself.

At most 55 GW will be installed in China this year, which is the lower bound of the targeted 55 GW to 65 GW. 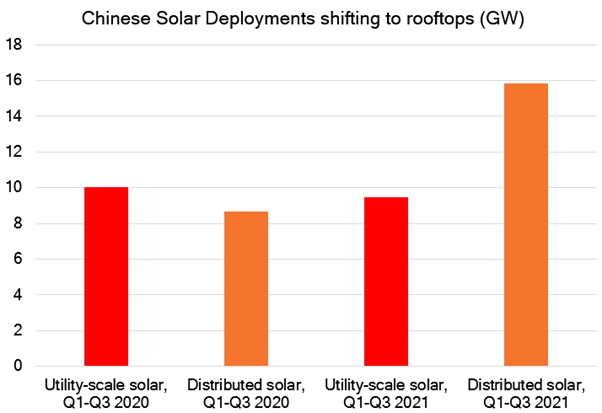 With China the obvious topics to cover are the ongoing polysilicon shortage, the “whole county promotion” of distributed solar, or the hybrid wind-solar “base projects” whose scale will come to the hundreds of GW within the decade; but these have all been covered by us recently.

Instead, with distributed solar in the ascendant right now, perhaps it is worth taking the opportunity to discuss Shandong province’s extreme prominence in China’s rooftop segment. With 7% of the national population, the province has a massive 22 GW of China’s 90 GW distributed capacity, almost more than the next two runners up combined – fellow wealthy coastal provinces Zhejiang and Jiangsu. Shandong has 27 GW of solar installed, and may reach 57 GW according to government projections for 2025; so it is going to be almost on par with Germany as a solar market, until Germany’s new Green coalition government supercharges solar deployments.

Shandong does have the better solar resource compared to its southern, more cloud-covered neighbors, but the real difference has simply been local initiatives – “Ten Million Rooftops” and similar policies have put it in the lead spot for rooftop, while even for utility-scale development it is in fifth place thanks to intensive promotion of photovoltaic land use – agrivoltaics, tidal-flats, and solar fisheries – modules built onto platforms over freshwater fish farms.

Another thing worth mentioning, given its direct impact of the solar manufacturing industry, is the coal shortage and orderly use control orders which shut down an appreciable fraction, maybe 15%, of China’s industry in September-October, including the energy-intensive solar manufacturing industry. The electricity controls were already lifted a few weeks ago, and the efforts of the Chinese government to secure more imported and domestic coal have succeeded. Stores of coal are equal to over three weeks of consumption and even the under-threat Manchurian region is now secure.

In the USA, the story is very different – 4.4 GW utility-scale and 1.8 GW distributed. A 72% prevalence of utility-scale capacity reinforces the “new normal” in which 68% US solar installations are utility-scale, up from a consistent 53% in past years. This is a trend which began in Q2 2020 – so it is largely the pandemic lockdowns which can be blamed for suppressing the rooftop sector. 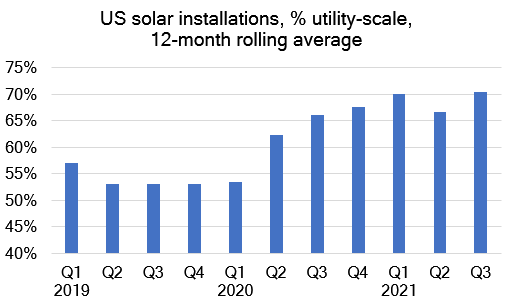 Figures produced for US solar panel imports vary, but there is consensus that Q3 specifically has seen a sharp drop beginning in July, down at least 12% year-on-year and perhaps 25% from last quarter. The main reason is obvious – it was in May that the first steep rise in the polysilicon price occurred, with ramifications for the rest of the supply chain, atop existing high prices for US-China freight.

It’s also possible that fears of extra tariffs and sanctions deterred some from arranging imports; there were some incidents of shipments being detained over links to Xinjiang polysilicon. But given the Biden Administration’s agenda to rapidly increase the scale of the energy transition, it has not been surprising to see trade kept open – against the wishes of American Solar Manufacturers Against Chinese Circumvention (A-SMACC) and others.

US solar’s fourth quarter won’t be quite as strong as the third quarter because of this supply limitation. Another reason is that the industry no longer has to rush to install in Q4 ahead of a solar ITC subsidy deadline to meet, since the ITC’s extension and restoration to the full level as part of the Biden Administration’s massive spending programs.

INDIA
India installed 8.8 GW in the first three quarters, and then a further 1.4 GW in October – so 10.2 GW in ten months, a solid advance on the last normal year of 8.5 GW in 2019. So optimistic predictions of 13 GW haven’t panned out, but 12 GW this year is a sure thing. The resilience of this market – despite being heavily utility-scale with low non-BOS costs, and with modules 40% of a typical project’s investment cost – is impressive in the face of the price spikes of this year. No doubt the temporary dropping of a 14.5% import tariff on Chinese solar imports is the reason.

The wider story with India is that its Energy Minister RK Singh has been working overtime to attract foreign direct investment, to build a local manufacturing base using subsidies and future customs duties, and to tackle recalcitrant state governments and transmission operators which want to avoid paying for transmission lines or for renewable energy at previously-agreed rates.

As projects delayed in 2020 come online and make a record year out of 2021, it would appear that Singh’s efforts and those of the Modi government are meeting with success – India is still decentralized, poor and rather corrupt, but the government is showing that it is possible to overstate such things. Prime Minister Narendra Modi’s home state of Gujarat is set to host 50% of the announced manufacturing expansions in India’s solar industry, as well as being a leading state for the solar projects themselves, and the government has been consistently running tenders for tranches of vast solar complexes while opening up disused land, such as that owned by Indian Railways, for solar installations.

The story in Japan and Australia is unchanged from last quarter – no new favorable policies, leading to stagnant and even weakening installation figures – 766 MW in Australia and an estimated 1800 MW in Japan. Japan recently selected a traditional LDP politician as its leader, so there will be no sudden revitalization of renewable subsidies and instead nuclear power is being cautiously revived.

In Australia the picture is rather different – next year’s election could easily see the Liberal government fall, along with its neglect of the energy transition and support for fossil fuels. If it stays in power, the state governments will continue supporting renewable power, but federal regulations and the transmission grid will remain obstacles to any acceleration of renewables.

Just as Japan’s problem is a lack of space, Australia has too much, and its transmission infrastructure costs much more, and it is more linear and narrow in its ability to accommodate new capacity, simply because it must be so far-flung. Vestas has recently announced that new wind power plants will grind to a halt if the government doesn’t take action to expand the power grid, and the situation for solar is no different. Even domestic installs, the majority in this market, are stalling.

South Korea increased its installed solar capacity by 8% in Q3 with 1240 MW, bringing its total to 17.25 GW – in recent years this nation has pulled ahead of France, Spain, the Netherlands, Italy, and the UK in the world rankings for photovoltaic capacity.

Taiwan installed 378 MW in Q3, and 1184 MW so far this year – indicating 1.5 GW this year. Solid demand and incentives should see this grow consistently, with up to 2 GW installed in 2022.

Taiwan and South Korea have the same land availability problem as Japan.  This year South Korea has begun promoting developments alongside highways, not to mention ongoing progress with the far larger and more important Saemangeum floating solar complex; while Taiwan has been promoting solar-fishery installations as if in imitation of the Chinese mainland. South Korea’s 2 GW tender earlier in the year included a category for projects of 20 MW and above – a novelty for a purely distributed market. 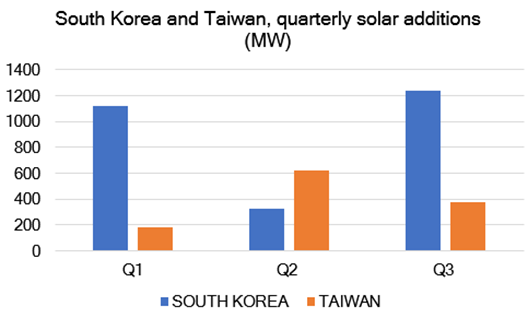 Polish solar additions are up 45% year-on-year so far in 2021 – it is a new market that is constantly and consistently accelerating, from just 500 MW at the start of 2019 to 6.3 GW at the end of September 2021, with 950 MW added this quarter – that’s more solar installed per capita than Germany right now.

Poland has already exceeded the 5.1 GW target it set months ago for 2025, with the result that its government views policy relating to sub-10 kW as overgenerous. At present users get paid for their solar output according to a subsidy, and they can draw power from the grid free of charge equal to up to 80% of the amount they put in – even at different times of day. This will be changed for a market-oriented system.

But policy is not going to go retrograde – one of the next steps from the government will include subsidies for domestic solar-plus-storage systems. 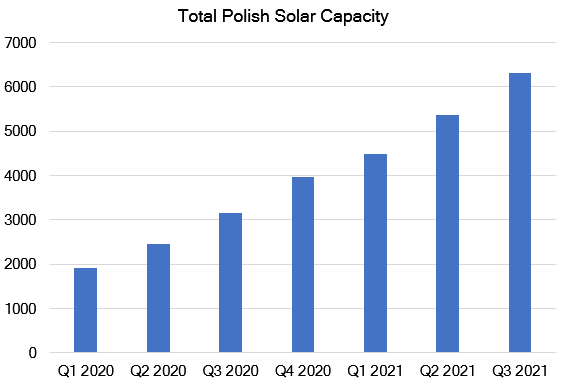 As for Latin America, Brazil has reached 11.5 GW, with 4.3 GW utility-scale and 7.3 GW rooftop as of the end of October. Breakdowns published last quarter by industry association ABSOLAR showed a revival of Brazil’s utility-scale sector, and this has dramatically strengthened in Q3, with utility-scale deployments almost catching up to rooftop.

Chile, which only has a population of 19 million, still manages to be one of the world-leading solar markets thanks to its natural conditions, mining industry and policies. As such we can put its quarterly installations on the same graph as Brazil. 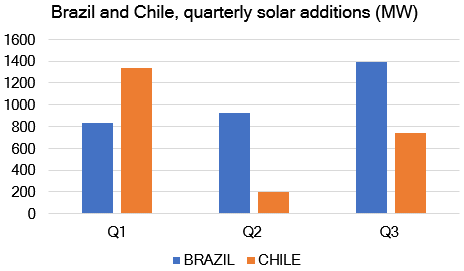 Meanwhile the other major Latin American country, Mexico, remains a dead market, its government recently raising fears that rooftop PPAs with community projects would be unilaterally cancelled by the government.

Germany, Italy and the UK posted nondescript results for the quarter. Germany is of course already a large market, with 1.3 GW added this Q3, but that is nothing new. The results from Italy and the UK, only a few hundred MW combined, show that the explosive activity which we expect any day now still has not quite reached fruition.

Germany is about to embark on a far larger explosion. Its new Green-inclusive coalition government has set a target of 200 GW by 2030, which means 140 GW in nine years. Having regained in 2019 to 2020 the 4 GW to 5 GW pace that it had immediately after the last Recession, this means Germany is about to triple that and reach 15 GW per year. 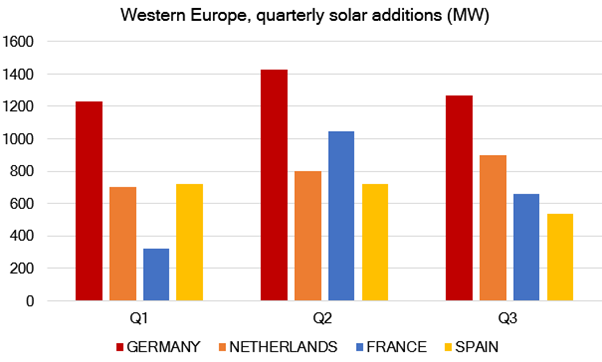 That leaves France, the Netherlands, and Spain as Western Europe’s other highly active major markets. The Netherlands and Spain are only up by a disappointing 18% and 4.5% year-on-year, trailing the global average.

France however is up by 194% – with almost three times as much photovoltaic capacity deployed so far in 2021 compared to 2020, a boom driven by an unleashed utility-scale segment. The largest plant in the country, the 300 MW Cestas, was built in 2015 and is a unique case – meanwhile the second largest is 152 MW and was commissioned only a couple of months ago.

Beyond these factors, a $34.5 billion incentive package for renewables was approved by the EU in July, and a 20-year feed-in tariff scheme with $6.45 billion allotted was approved in September for projects under 500 kW. Current government targets see 44 GW more solar to be built by 2028 – even alongside nuclear and wind power strategies.