NREL models growing importance of energy storage, to 5X and beyond

The US Department of Energy’s National Renewable Energy Laboratory has essentially laid out what it believes to be a number of the potential future paths of energy storage in the US, which it insists might reach anywhere between 125 GW and 680 GW of battery storage by 2050.

Not only do we believe this is a fantastic underestimate, but it is also quite a vague range, that can accommodate every eventuality in between. What NREL is clear about is that this is not really supposed to be a forecast, more an investigation into what shape the grid energy storage industry may take in the coming 30 years, with data provided for developers and EPC providers to calculate when a battery project is likely to make money. It can be found here.

NREL concludes that even at the extreme end of its forecasts the penetration of renewable only gets to between 43% to 81% of grid generation, but does not achieve full decarbonization goals, so further work will be commissioned which will include a transition to a fully green grid by 2035 and the resulting impact on storage deployment.

NREL concludes that utility-scale diurnal energy storage deployment will at least grow significantly through 2050 to at least 5 times the mostly pumped hydro storage that is deployed today. If costs continue to come down rapidly NREL concedes that that the total could be far more. 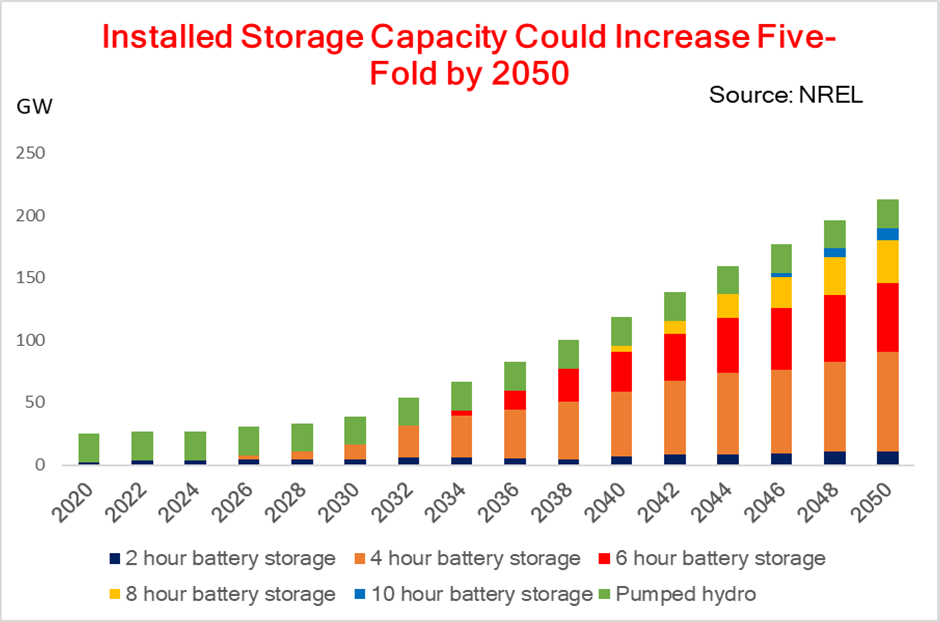 This is its third report on energy storage, and in it, it is beginning to build up resources for those who want to plan for future energy storage projects.

The paper includes capex calculations declining through 2050, and starting at $192 per kWh for battery alone, and adds in all the cost elements in the diagram above, which take in all development costs and all EPC costs.

Mistakenly NREL says that all installed energy storage today is pumped hydro, while we know that while the US does have 22.8 GW of pumped hydro, it has seen the addition of many lithium ion batteries to the grid over the past 18 months, around 1.1 GW by 2019, and at least a doubling of that figure during 2020. This year quite a lot more is to be expected, something in the region of 6 GW of 4 hour storage on the grid and a further 800 MW of domestic, mostly one hour installs. 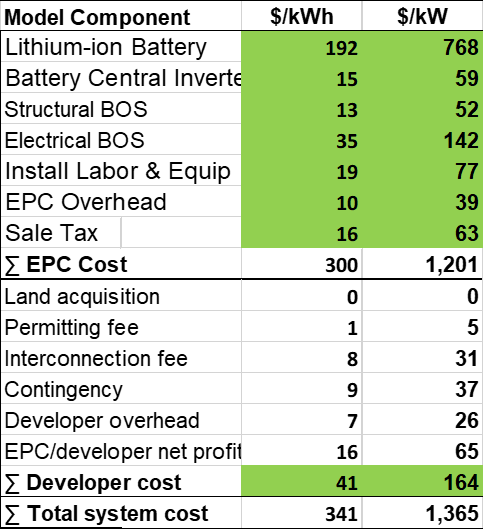 In terms of actual GWh installed Rethink Energy reckons this will amount to over 35.7 GWh of battery installed by year end 2021, however that is from a forecast made prior to the pandemic and things may have been slowed down somewhat in the interim. The NREL study considers the pumped hydro to be 12 hours battery, and so estimates that the pumped hydro is capable of offering 273 GWh in any given day, which would make that 35.7 GWh estimate put a 13% size hole in the market.

NREL intends to have a call on this on June 22 to explain its position on it. The paper does have a “learning curve,” calculation to predict the fall in the price of grid energy storage going forwards, and it is very similar to the ones we have drawn for the falling price of solar and wind LCOE. However the use of the same lithium ion batteries in electric vehicles means that the learning curve on lowering the price of battery could see the NREL forecasts soundly beaten, due to huge volume increases.

Part of its sophisticated modelling is to take in when energy time-shifting from storage actually raises off-peak energy prices because the batteries need to buy their daytime energy from somewhere, and simultaneously this will lower peak pricing. This will lead to a fall in the value of time shifting energy as we get more storage penetration, which implies a limit will emerge when it is too expensive to install storage purely for energy arbitrage and only for reserve, as peak and off peak almost merge into one price. NREL also tries to take into account curtailment of existing solar and work out what happens if that energy becomes available via storage.

While we are slightly cautious of simply accepting the NREL numbers, especially as the US grid begins to change shape under Biden Administration spending, we believe that grid storage will be “at least” as much as NREL says, and most likely nearer its top end estimates, rather than its bottom end. Also the model specifically ignores behind the meter storage, which some utilities may well have access to via partnerships with mediators and battery OS players.

Regardless, when it comes with this much data and a real model behind it and the endorsement of NREL, there is every chance it is taken as gospel by US utilities, many of whom have been suspicious of lithium ion battery for anything beyond 2 hours, who may now change long term planning to be more accepting of it.