The next five years are set to be transformative in the world of consumer WiFi, according to a new forecast from Rethink TV, Faultline’s sister research wing. CPE is set to become smarter, stronger, and more flexible as it rushes to keep up with steady upgrades of consumer client devices.

Aside from the growth of cloud management and multi-AP set-ups improving coverage in the home, WiFi CPE is set to become more powerful with new WiFi standards. WiFi 6 promises higher throughput, as well as the addition of a new 1,200 MHz portion of spectrum in the 6 GHz unlicensed band. The 6 GHz band brings even more flexibility in band switching, as well as simply upgrading a network’s total capacity. WiFi 7 will bring even more updates.

It is true, you could probably look at any five-year period in the past fifteen or so years of WiFi and label it ‘transformative’. But the key difference with the next five years is that it is the first time that we are set to see domestic WiFi set-ups expand into 6 GHz en masse.

Rethink TV anticipates a five-fold expansion in WiFi cloud management between 2021 to 2026. This technology uses a combination of cloud applications and home gateway software to set policy operations for WiFi in the home. This can regulate which WiFi band each AP in the home will run on, and how often each AP selects channels, all to prevent interference between competing APs and devices.

Rethink TV expects that homes with cloud managed WiFi will grow from a global footprint of 125 million homes in 2021, to 640 million homes by 2026 – 60% of all broadband homes. While North America begun 2021 with the largest market share, it will quickly be surpassed by APAC this year in terms of units, while Europe will follow suit in 2023.

This growth in WiFi cloud management technologies will accommodate a steady rise in homes with more than one access point, as multi-AP set-ups will grow from 55 million in 2021 to 325 million in 2026, encompassing 27% of all broadband homes.

While most regions will end the forecast period with much runway left for multi-AP deployments, North America will see a dramatic plateau as multi-AP reaches its market cap of around 38% in 2026. One CPE vendor shared their own research findings, which found that only around 38% of homes in the West require multi-AP deployments to provide full in-home coverage without any packets dropped.

While the growth in multi-AP deployments is impressive, what was most striking about our findings in this area is that operators are set to take full grip of the multi-AP market by 2026. While the multi-AP market is currently split around 50-50 between operator-supplied and retail-supplied set-ups, Rethink TV predicts that operators will have a 69% share of the market by 2026.

Both segments will still grow over the period, as CPE becomes cheaper and work-from-home bandwidth demands taper upwards, but at completely different speeds. By 2026, the growth of retail-led deployments is clearly plateauing, at 100 million homes, while operator-led deployments are at 225 million homes. 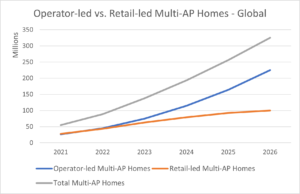 The next five years will see WiFi 6-enabled CPE massively expand its footprint, rising from 12 million homes in 2021 to 611 million in 2026. There will be a strong acceleration in deployments from 2023 onwards, as the current silicon manufacturing bottlenecks begin to ease, and WiFi 6 components become more reliable and cheaper to produce. From this point onwards, Asia Pacific’s footprint of WiFi 6-enabled CPE will shoot ahead of North America and Europe.

Although the volume numbers are severely scaled down, we will see a similar pattern in the deployment of WiFi 6E-enabled CPE – that is, APs that can operate in the 6 GHz band. 6E-enabled CPE will grow from a 2021 footprint of 390,000 homes to 386 million homes in 2026 – 32% of all broadband homes. An acceleration is expected after 2023 for the same reasons as WiFi 6-enabled CPE, plus the unavoidable reality that countries are still in the painstakingly slow process of regulating the 6 GHz band for unlicensed use by CPE.

Although beneficial for all, 6E only has revolutionary benefits for particularly internet hungry consumers with high bandwidth requirements and the need for a dedicated backhaul. 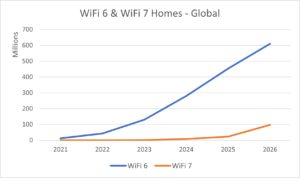 Naturally, these changes in WiFi CPE will not occur in isolation. They will largely be driven by a change in the makeup of consumer client devices, as the total install base of devices moves from being majority WiFi 5-enabled to a majority of WiFi 6-enabled.

The scope for this report was initially meant to encompass how operators are scaling up their WiFi offerings to encompass add-on premium services – smart home devices, security, and parental controls. However, it quickly became apparent that operators do not have the appetite for such services, bar security, which consumers often trust most when deployed by an ISP.