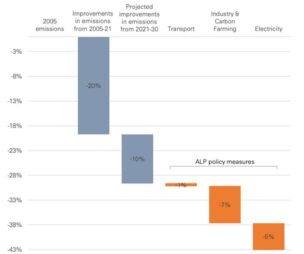 Australia has a new Prime Minister. This ends a decade rule by a conservative coalition that climate activists will be happy to see the back of. Under Anthony Albanese, the Labor government has promised to turn Australia into a “renewable energy superpower” and to end the “climate wars” that have stunted progress for years. But with limited action to phase out fossil fuels so far, the Party’s legacy will be defined by its ability to promote acceptance of a future in exporting clean energy.

Three years ago, Rethink Energy said that the 2022 Australian election would be the world’s first ‘Climate’ election. Indeed, while climate change was a flashpoint in previous elections, this election marks the first real win for the country’s energy transition and a potential paradigm shift in its climate policy.

At the time of writing, with four seats still to call, the Labor party looks almost certain to get over the line to secure a majority government, with just one more seat required.

Recent years have seen Australia battle with the direct consequences of climate inaction. Yet despite unprecedented wildfires, heat waves, record flooding and coral bleaching, previous leader Scott Morrison was reluctant to announce his country’s net zero emissions target for 2050 ahead of COP26 in November.

Having said that he would not be dictated to by other governments’ climate goals, the net zero target Morrison has left Australia with is not yet enshrined in law. Instead, consumers and businesses across the country will contribute as much – or indeed as little – investment as they want towards the goal, with no legal incentive. The country is currently responsible for 1.16% of global emissions – the 14th largest share – and is currently the second largest polluter per capita. Current plans aim to reduce emissions by between 26% and 28%, from 2005 levels, despite the fact that it is already on track to achieve between 30% and 35%.

The center-left Labor party has positioned itself far more aggressively on climate action. It wants to reduce emissions by 43% by 2030, and – unlike its predecessor – it has outlined several key policies that will support the country’s net zero target.

Central to these are plans to increase the share of renewables in the National Electricity Market to 82% by 2030, supported by public investment of $14 billion to modernize the grid and unlock the potential of large-scale renewable energy projects in Australia’s heartland. Indeed, grid constraints have seen Australian investment in renewables decline in the past year or two.

The Powering Australia plan aims to spur $54 billion of total investment, while cutting power bills by an average per home of $275 per year by 2025. The manifesto also promises to invest in rooftop solar and battery storage for households.

Labor will also make significant changes to the country’s ‘Safeguard mechanism,’ which aims to keep the country’s largest industrial emitters to net emissions below specified emissions limits. The system covers 215 facilities, spanning metals, mining, and oil and gas extraction, that are responsible for 28% of the nation’s emissions. It mandates that these facilities are required to purchase carbon credits if they breach pre-defined emission limits.

It is, however, worth noting that the 43% cut in emissions is less ambitious that the 45% target the party proposed in the 2016 and 2019 elections. The Labor party has also been fairly relaxed about the country’s huge fossil fuel industry.

Albanese has confirmed that his government will not sign a pledge to phase out coal from Australia’s energy mix. Coal still accounted for 52% of Australia’s domestic power consumption in 2021, with natural gas making up another 18%. But despite this, the party has insisted that ageing coal plants will not be retired ahead of schedule.

With Australia on track to commission 69 new coal projects and 45 new LNG, gas and oil projects, Albanese has even said that the country could still be backing coal mines in 2050, if they “stack up environmentally, and then commercially.” They of course can’t in a net zero world.

Labor’s apathy stems back to its defeat in the 2019 election, where it lost voters in the coal-mining heartlands. Australia is currently the world’s largest exporter of coal, and the tenth largest exporter of natural gas, so it’s inevitable that there will be continued reluctance to announce a firm shut-off date to industries that have been at the heart of the country’s economy for so long. Coal exports were also worth $64 billion to Australia in 2019. While the country is responsible for around 1.4% of global emissions, the coal and gas it exports make its fuels responsible for over 4%.

This export economy is what is holding Australia back from the revolution it desperately needs. While fossil fuel exports to countries with strong net zero targets – like China, and those in the EU – this will simply lead to Australia exporting more to the likes of India, Indonesia, and Vietnam.

Resisting climate targets in this case may simply be a way of keeping export channels alive, while slowly shifting to renewables. The Australian government is already pushing to fast track its 26 GW Asian Renewable Energy Hub and other initiatives, which will act as a major exporter of clean power and hydrogen to the likes of Taiwan, Japan and South Korea, which lack the natural resource for sufficient renewable capacity.

The first 15 GW vision of the Asian Renewable Energy Hub project was approved last year. Other projects include the 10 GW Sun Cable project between Australia’s Northern Territory to Indonesia and Singapore, as well as several other GW-scale green hydrogen projects which have been proposed, spread between South Australia and Queensland. The nation has also made the first moves to install its first offshore wind capacity before the end of the decade.

While Australia’s federal government has floundered with its decarbonization promises, the country’s industry and regional governments have been stepping up to the plate. Victoria has already committed over $1 billion to subsidizing large scale renewable energy hubs, while Queensland has promised to support up to 16 GW of renewable energy generation.

A greener government will be a boost to these state-led ambitions, as well as the visions of business leaders such as mining tycoon Andrew Forrest, who are looking to pioneer a new era of green hydrogen and ammonia exports from Australia to the rest of the world.

Through his company Fortescue Metals Group, recent headlines have seen Forrest pledge to have the world’s first ammonia-powered ship ready by the end of 2022; export enough hydrogen to displace one-third of Germany’s Russian gas imports; invest $2.2 billion into renewable energy hubs in Queensland

Australia has the potential to be a global hub of clean energy exports, with access to exceptional wind and solar resources. The country should, however, first reform its own electricity system by replacing coal stations with renewables-plus-storage projects, which have the strongest economic-case in Australia of all countries. It must carefully handle the transition of fossil fuel workers and communities to prepare them for a hydrogen-future.

With all of this available renewable power, the country should also go hard at electrifying its transport and homes, while using off-grid renewables to power its extensive manufacturing sector. By 2050, Australia will be producing much of the materials required for clean energy technologies, but its credentials in doing so will depend on how clean they are producing them.1

The world of renewables this week
Hyundai bites the EV bullet, adds US factory to Korea and Indonesia