Accelerated EV uptake means oil will be dead by 2031

In a report put out just before Christmas by Rethink Energy we can see that by 2050 only 7.6% of the global 1.76 billion passenger car fleet will still use some form of fossil fuel. The remaining 1.63 billon will be either electric vehicles or some other form of zero emissions transport. Supporting the remaining 130 million or so Internal Combustion Engines will be a logistical nightmare for the one or two remaining oil companies, and most oil majors will either be out of business or out of the petrol business by then.

This forecast is available on this website entitled “Tesla versus ExxonMobil – who’s right?” with a sub-heading that says, “Rethink Energy’s definitive 30 year forecast on EVs and eMobility – With dramatic implications for oil and for investors”

The report is seen as conservative by Rethink Energy CEO Peter White who said, “This is a simple extension of the buying habits we are seeing in Q2 and Q3 of 2021. This is the least that will happen. We can see plenty of changes which could further accelerate he change, but none that can prevent it.” 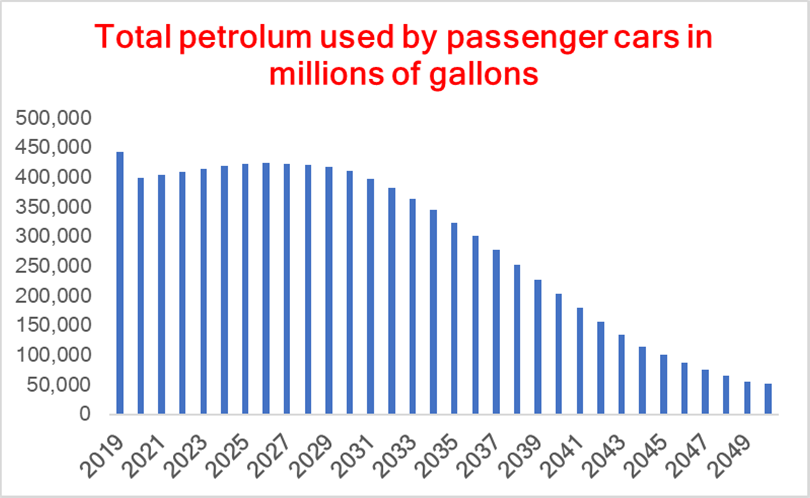 The oil companies who believe it is still fine to be in the oil business will hit major headwinds from 2027, as the first of successive 5% falls in the number of internal combustion engines on the road occurs. By 2031 the value of oil will fall so far that the asset values of these businesses will be below their debts, and banks will end up bartering oil assets which are worth less and less each passing day. The only refuge for a further ten years will be the natural gas industry which will already by then show signs of heading into reverse itself.

This is a direct consequence of consumer decisions to get behind Electric Vehicles and of a serious of major governments in announcing initiatives to accelerate the roll out of fast charging re-charge points. These will reach 460 million separate charging posts by 2050, with some 167 million of them public charge points. The OPEC+ cartel will have long since disintegrated. For all intents and purposes the oil industry will be in the past and its asset base will be destroyed.

What will rise up to replace it is already pretty clear – a world with 1.63 billion electric and zero emissions passenger cars – and that’s not counting, buses, trucks and commercial vehicles or two wheelers – which will also have gone zero emissions to the much the same extent.

By 2030 there will be a number of huge bankruptcies of household names, as many of them have left it too late to move their businesses anywhere sensible. Debt holders will squabble over the remaining corpses, looking for assets worth buying cheap and turning around fast. They will find few. The biggest issue is replacing oil that is now too expensive to take out of the ground, in the feedstocks of many chemical industries, including plastics.

The graph above shows how the world will never again recover the oil usage numbers of 2019, which was indeed peak oil, and yet there are probably 5 more years of slightly increasing oil sales from the depths of the pandemic, before successive 5% falls in oil revenues will see the price under pressure, as too much supply chases too little demand. 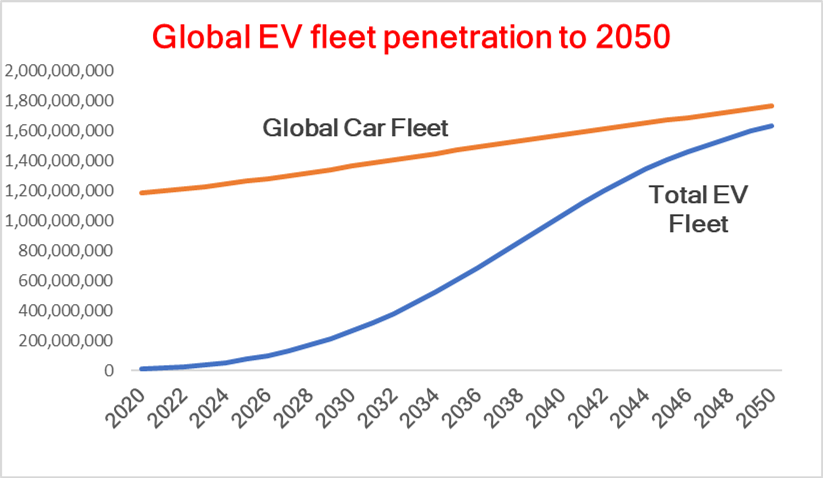 Investors will have a clear picture of this in 4 to 5 years and the share price of the major oil companies will be measured purely in how far they have travelled towards renewables and hydrogen, as a revenue base. Sustainable fuels for aviation will still have some life left in them up to 2035 but little else.

If you are a company reliant on the oil industry and want advice on how to avoid its fate, email Simon Thompson at Rethink Energy for an analyst briefing [email protected]