The Australian Energy Market Operator (AEMO) has published its draft Integrated Systems Plan (ISP) for 2022, which by 2040 sees almost all fossil fuels gone from the grid, leaving only some gas peakers to supplement solar, wind and battery capacity.

The Step Change scenario, considered the extreme case in 2020’s ISP, is now being treated as the most likely default set of outcomes. By 2050 the new plan involves Australia’s distributed solar capacity (currently 15.5 GW) increasing five times over while utility-scale renewables increase nine times over. Firming capacity able to respond to a “dispatch signal”, meaning batteries, gas peakers, hydropower, and VPPs, will triple. 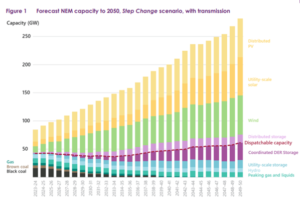 It’s worth bearing in mind looking at this graph from the ISP that Australia’s population is slated to rise from 26 million to 36 million by 2050; that’s a 40% increase, whereas AEMO sees annual generation on the NEM rising from 180 TWh to 330 TWh.

That 80% increase is just for EVs and other segments where diesel and petrol are being directly replaced. It doesn’t address grid demand from the multiple green hydrogen complexes which are being planned all around Australia’s coastlines; AEMO covered that in the Hydrogen Superpower scenario, in which national consumption reaches 294 TWh already in 2030 and then 1,278 TWh in 2050. In Step Change 2050 hydrogen consumption is 58 TWh domestically and none is mentioned for export; in Hydrogen Superpower it is 132 TWh domestically and a titanic 816 TWh – including green steel exports.

That latter figure is equivalent to 93 GW running constantly all year round, if it was nuclear power, and with solar-wind capacity factors it’s more like 300 GW. That’s pie-in-the-sky stuff – so let’s also look at AEMO’s 2030 figure of 49 TWh – that implies something like 20 GW of wind-solar capacity online producing green hydrogen. Even though “Superpower” sounds like a utopian term to use, this is quite realistic and “already happening” if you put stock in the many hydrogen export hubs which have been proposed.

And that produces a second capacity projection graph in which Australia, expected to have just 36 million citizens, will house 800 GW of capacity, with wind definitely taking up at least a third of that, up to a half, because electrolyzers are expensive enough to always want to keep them running and wind’s generating profile doesn’t switch off at night. 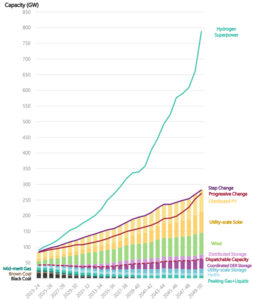 An oddity of AEMO’s Hydrogen Superpower scenario is that it sees renewables reach 100% of the grid already in 2031; but if a load of new demand is added to the grid in the form of hydrogen electrolyzers, that might seem to make it harder, not easier, to get rid of coal quickly. But of course much of that hydrogen capacity is specifically driven by dedicated renewables.

That hydrogen issue is only one way in which the Step Change scenario still isn’t radical enough. Another is that AEMO still sees a place for fully 9 GW of (admittedly little-used) gas peaker capacity, alongside 45 GW/620 GWh of batteries and 7 GW of hydropower. Without even asking whether the gas industry will still enjoy its current economies of scale and be commercially viable in 2050, it is only to be expected that in the coming decades the Australian voting public will become more aggressive with the green agenda on the political side. 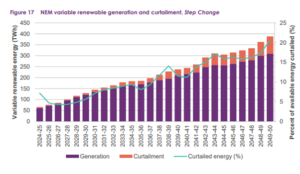 Interestingly AEMO sees curtailment rising by almost 1% a year, each year from 2028, to over 20% in 2050. AEMO states that it will be easier to meet winter demand by overbuilding photovoltaics rather than building seasonal storage to make full use of summertime generation. One might put in a word for the future of CSP, or Raygen’s storage system, or storing solar energy via electrolysis as hydrogen – but none of these are likely to become cheaper so swiftly as to overtake photovoltaics own prospective cost declines.

This is especially true in Australia’s case with its excellent land availability, including on the coast, already seeing vast solar complexes planned. Another cause for curtailment is the country’s far-flung distances which makes it prohibitive to build more transmission infrastructure than is absolutely necessary. The 2022 ISP sees 10,000 kilometers as necessary at a cost of over $8 billion.

AEMO sees solar costs falling to $15 per MWh by 2035, which is basically identical to our own Rethink Energy projections in the Look Back in Anger and Perovskite reports. Only electrolyzer capacity might become cheap enough to overbuild compared to solar, but that would be based on technical breakthroughs in electrolysis design.

Another remarkable point of this plan is that AEMO believes coal will collapse faster than has been announced, with 14 GW of the 23 GW total dying out by 2030, as opposed to just the 5 GW whose decommissioning has been announced so far.

AEMO operates both the Western Australian grid and the National Electricity Market (NEM) which covers the rest of the country excluding the Northern territory – though the NEM has only limited transmission connections into South Australia.