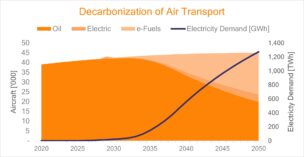 Liquid ammonia could show its worth in decarbonizing air travel as soon as next year, according to Aviation H2. The company claims that the use of the fuel in a turbofan engine is the “best route to carbon-free flight,” due to its high energy density and medium liquification temperature. Huge NOx emissions and a sub-15% round trip efficiency, however, may provide insurmountable obstacles to commercialization.

The Australian start-up has just completed a three-month feasibility study, where it found that the stored weight of energy in liquid ammonia – when including tank requirements – is significantly lower than that of gaseous hydrogen. It is also more energy-dense than liquid hydrogen, when considering the energy required to hold the temperatures needed to keep hydrogen below its boiling point.

It now plans to start modifying turbofan engines to run on hydrogen, with eyes on getting its first Dassault Falcon 50 private jet in the air by the middle of 2023. Following this, the company believes it will have a patentable method of modifying aircrafts to operate on carbon-free fuel. It will then look to list on public markets in Q4 of 2023.

The company has selected the Dassault Falcon 50, due to its high availability in Australia, as well as the fact that it has three engines – only two of which are required for flight. Aviation H2 will test the third engine in operation, before moving on to modify the main engines.

Aviation H2 has also signed a recent strategic partnership with FalconAir – a specialist provider of charter and emergency medical evacuations – which will grant Aviation H2 access to its partner’s hangar, facilities, and operating licenses in which to build its prototype plane.

Aviation has long been dubbed as one of the hardest sectors to decarbonize in the global economy – accounting for around 2% of global emissions – the use of green hydrogen, ammonia, as well as synthesized biofuels are all being explored as disruptive opportunities.

The advantage of anhydrous ammonia comes down to its high gravimetric and volumetric energy densities. Containing 11.5 megajoules of energy per liter, the fuel is lighter and easier to transport than liquid hydrogen (8.5 megajoules) and compressed gaseous hydrogen (4.5 megajoules).

The cost of keeping ammonia as a liquid should also be moderate. This can either be done at room temperature at a pressure of 7.5 bar, or at atmospheric pressure at a temperature of -33 degrees Celsius.

Compressed hydrogen, by comparison, typically requires pressures of 690 bar, while hydrogen needs to be cooled to -250 degrees Celsius if it is to be liquefied.

Ammonia therefore finds a middle ground between the logistical advantages of storing gaseous hydrogen at atmospheric temperature and pressure, and the raw energy density of liquid hydrogen. The company has highlighted that liquid ammonia has been handled and transported around the world for decades, primarily for use in fertilizer, meaning that much of the infrastructure is already there for its early penetration in aviation.

From a practical perspective, the liquid ammonia can be used in the combustion chamber of a turbofan, producing the same amount of thrust as traditional fuel sources. Aviation H2 also says that it will be easier to modify existing aircraft fleets, rather than developing new ones.

The big problem here is that ammonia – NH3 – produces huge amounts of NOx emissions when burnt. N2O emissions, in particular, can act as a greenhouse gas with a warming effect that is 298 times greater than carbon dioxide.

Aviation H2 has provided scant details on how it will tackle this, stating that it will add pure ammonia to the post-combustion exhaust gas in a “second burn” that can reduce NOx emissions. This should turn some of the NOx into pure nitrogen and water, although it’s not clear how effective this will be. If it’s anything like the technologies being used on exhaust gases in other sectors, we wouldn’t be too hopeful. While catalytic converters can have efficiencies of up to 99% in reducing certain kinds of emissions, NOx reduction efficiencies are typically between 10% and 30%.

Other approaches being taken include those being researched at the University of Central Florida, where Ammonia is catalytically cracked – prior to combustion – allowing pure hydrogen to be burned inside the engine. Burning hydrogen in air – which is 78% nitrogen – still results in NOx emissions, but far less than if there is high nitrogen content in the fuel itself.

ZeroAvia, arguably the leader in the effort to decarbonize aviation using hydrogen, is aiming to use hydrogen fuel cells to power turboprop aircraft. It experiences the same issues with electrolyzer efficiency, but with fuel cells having an efficiency of around 60%, its round-trip efficiency sits closer to 45%, marking a six-fold advantage in terms of propulsions per kilogram against traditional jet fuel.

Despite its demonstrated success in smaller aircraft, ZeroAvia’s scalability will rely on liquid hydrogen, with a mass fraction of around 30%, which would theoretically put the utility of a hydrogen-powered plane above that of a jet fuel system. However, storing liquid hydrogen has its own thermal considerations, costs and complexities that need to be addressed before hydrogen can storm the market without the need for excessive fueling infrastructure.

The silver lining here is that these are merely surmountable engineering problems, and rather than having to overhaul the physics or chemistry behind the system, it is just a case of better integration, or using lighter weight materials within the storage of hydrogen. The other alternative here is for innovation in storage location; Boeing and Airbus having explored ideas of storage within the wing structure.

Airbus has announced plans to develop its own hydrogen-powered aircraft, which it aims to have in commercial service by 2035, which is planning to use hydrogen as a fuel to burn. In 2016, Germany’s H2Fly – a spin-off from DLR – used fuel cells to fly a motorized Pipistrel glider for 15 minutes, while in America, magniX has partnered with Universal Hydrogen to power a 40-seat de Havilland Canada Dash 8-300 with fuel cells by 2025.

But the truth is that there are other options when it comes to decarbonizing the heavier side of the market. The industry favorite at the moment appears to be synthetic fuels, combining green hydrogen with biofuels, with the likes of Nouryon, Gasunie and Orsted pushing to create a chemically identical version of the A1 jet fuel used in most aircraft today. Shell Aviation has also pledged support for SkyNRG’s DSL-01 project, which promises an 80% reduction in CO2 emissions against conventional jet fuel.

Current projections, however, indicate that these fuels could be as much as twice as expensive through operation than hydrogen and would mandate the use of combustion cycles which are less efficient in extracting energy from hydrogen than fuel cells. On top of this, there’s the land requirements for biomass; if you want to make bio-jet fuel from palm oil for example, the energy you can extract from one acre of land is 500 times less than if the same area is covered with solar panels.

The only feasible solution we can see in this space, which may provide long-term competition to ZeroAvia, is the creation of bio-jet fuel using waste as a feedstock, with Henrik Stiesdal’s SkyClean concept currently making headway around a potentially carbon negative process in Denmark. Take the UK as an example: the country produces 43 million tons of manure and slurry waste per year, and we estimate that less than 10% of its waste would be required to power the country’s aviation sector.

It is likely that bilateral agreements will soon see pilot airports and hydrogen powered routes between countries off the back of technology developed by ZeroAvia and other technology developers across the world. By mid-2025, Rethink Energy’s Annual Primary Electricity forecast anticipates that the first hundred hydrogen-powered planes will be in operation, albeit in small passenger and freight aircraft. Accounting for over one third of total aircraft sales by 2035 when systems become capable of operating on commercial-scale flights, hydrogen-based fuels will account for nearly 85% of unit sales by 2050. At this time, 47% of the world’s air fleet will run on hydrogen, with an annual demand for 15 million tons of the gas each year, used as either ammonia, e-fuels, of liquified hydrogen.