There is a tendency in the US to want to name “large projects” after large projects of the past, so the new Marshall Plan (the old one re-built post-war Europe) is being used to describe a $1.24 trillion investment in the old fossil fuel loving mid-west, in Kentucky, Ohio and West Virginia, as well as western parts of Pennsylvania around Pittsburgh. It is being called the “Marshall Plan for Middle America,” or MP4MA for short.

The plan suggests that $60 billion a year of total investment for ten years would be needed initially, then about half that for each of the next 20 years.

It is a plan brought together by a task force which is led by the Center for Sustainable Business at the University of Pittsburgh with support from researchers at the University Center for Social and Urban Research and the PERI Institute at the University of Massachusetts at Amherst. Additional content was provided by policy analysts from the City of Pittsburgh and the Enel Foundation, has also helped out, which also served as a scientific partner throughout the research process. And the Steel Valley Authority and Heartland Capital Strategies Network also contributed on the subject of labor unions and investor coalitions.

No sooner had the votes for Biden been counted, than Mayor of Pittsburgh Bill Peduto, along with other mayors from those other regions have tried to put together a 30 year zero emissions plan for a region of the US which holds well over 20 million people and which has historically been staunch suppliers of fossil fuel energy. The logic seems to be that if Biden is in, we’d best get on with zero emissions planning, and see if we can attract money before anyone else gets it.

The region is already poor, and it also expects to lose 100,000 jobs from Ohio alone as coal and natural gas plants close, a further 23,710 might go in Kentucky, and 20,000 in West Virginia, and this task force if to raise the money to build enough of a renewables industry to create 410,000 fresh jobs, split 270,000 direct and indirect jobs plus 140,000 induced jobs across the four states.

This would not be the first time this region of the US has been bailed out by government and widescale energy investment. In the early 1960s President Kennedy asked Congress to back a bail out because “Appalachia” (as this area is called) has low income, a lack of urbanization, deficits in education, and lower living standards and a “legacy of neglect” from federal government. This result was the Appalachian Regional Development Act and investments in infrastructure and transportation, including large-scale projects such as highways, airports, water resources, housing, and workforce development.

Ironically this triggered further investment from 1976, when the Department of Energy spent $92 million exploring fracking in the region, and the region’s much improved educational institutes found that salaries in the emerging oil and gas industries for unqualified employees in the region rapidly out stripped high school and graduate salaries, with the result being that as oil and gas jobs have started to disappear, few locals have a degree to fall back on. When the energy boom subsided, the earnings of dropouts declined relative to those of graduates, resulting in lower lifetime earnings. With that history, the mayors collectively want to see that whole process avoided this time around. 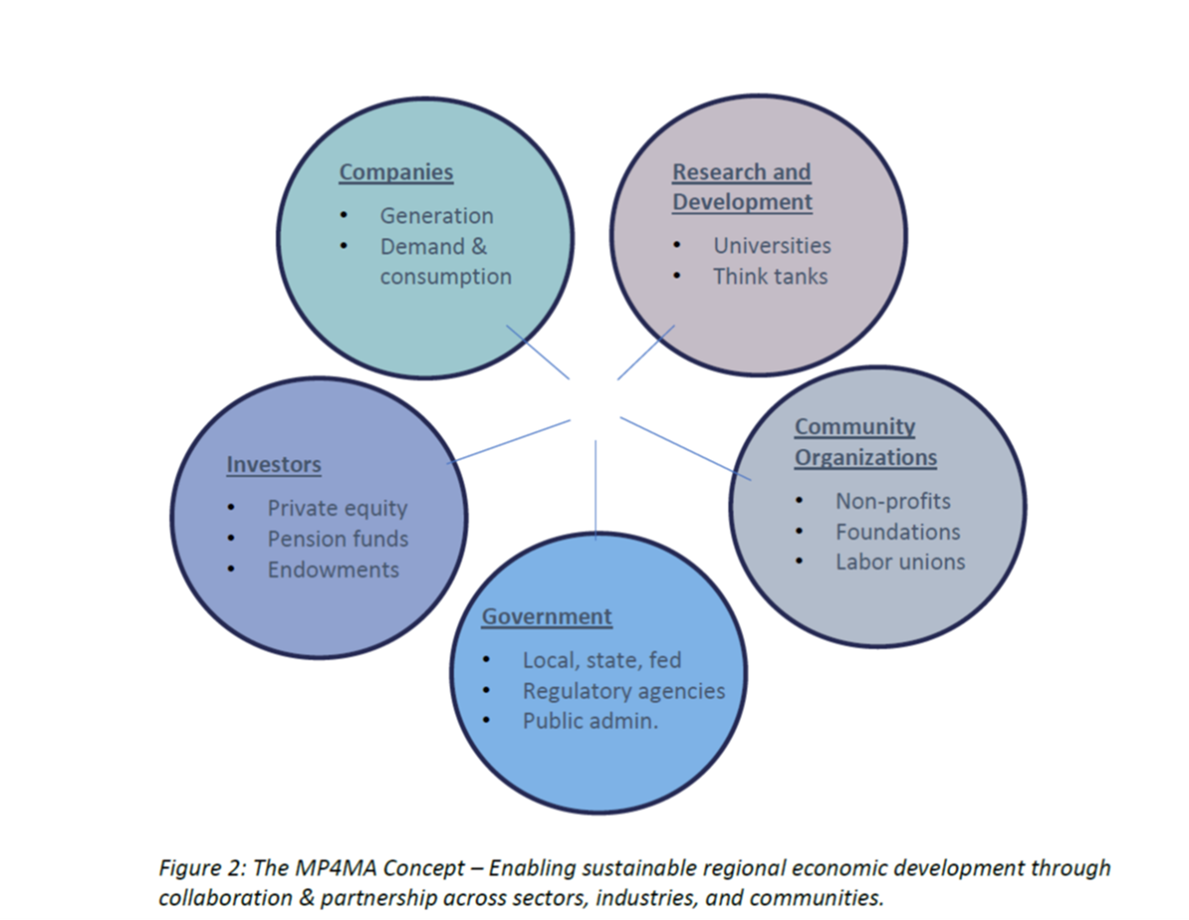 The program should be able to reduce CO2 emissions across the four states by 50% by 2030 and to allow it to reach zero emissions by 2050. At present, CO2 emissions produced by these four states account for about 12 percent of all emissions throughout the United States.

The first step is to get the new Green government to intervene, and the group gives examples of such interventions at Chrysler Corporation to keep bankruptcy at bay in 1979 and 2009, and the federal backing of AIG Insurance Group in the 2008 financial meltdown. So Federal funds might get the ball rolling.

But the bulk of the heavy financial lifting is expected to fall on a combination of pension funds and private equity groups with some kind of new conditions, partly relating to profitability of the investments, but also to their sustainability; and Green Bonds, which have a tendency right now to be significantly over subscribed.

It is interesting that in 2019, Enel Group issued the first general-purpose SDG-linked bond, an innovative corporate financial instrument that aims to contribute to the achievement of the Sustainable Development Goals. The real breakthrough innovation of the financial instrument is its capability to link financial performance and sustainable achievements. Enel Group created a $1.5 billion bond directly related to the achievement of these goals through the increased generation of renewable energy and full decarbonization by 2050, so that’s what the region now wants to rely on.

Additional changes in public policy by the Mayor’s should ensure that the jobs created through clean energy investments are high-quality in terms of wages, benefits and working conditions through the States’ negotiations with renewable projects. And involvement with labor unions and the promise of effective job re-training programs will help soften the blow for people working in the extractive industries. The paper said that policies are necessary to ensure that women and people of color have equal access to clean energy jobs too.

Interestingly any renewable energy that needs to sell through the energy markets locally will go through the PJM Interconnection to be delivered, and the entire project would shoot itself in the foot if PJM remained hostile to renewable energy, for instance by retaining the MOPR (Minimum Offer Price Rule) which prevents renewables from bidding beneath a minimum price, if they received any state subsidies, but this now seems ready to be resolved as companies have begun to embrace Carbon Pricing instead.

The paper gives details of the number of Quadrillion British Thermal Units that need to be replaced by renewable power, at around 7.9 QBTUs, although it is unclear if the paper fully reflects the fact that most energy in thermal generation is lost in the process of making electricity, because that seems an awful lot of energy at around 2,315 TWh per year. The task force seems this coming from 50% from solar; 20% from onshore wind; 15% from bioenergy; 7.5% from geothermal and 7.5% from small-scale hydro.