Are two heads better than one for floating wind?

Swedish floating wind developer Hexicon – famed for hosting two turbines instead of one on each of its platforms – has teamed up with local firm EAMAA to form a joint venture targeting the development of floating offshore wind projects off the coast of Greece.

The move comes in anticipation of the Greek government’s upcoming framework for offshore wind development, which will be released later this year, likely with a heavy emphasis on floating wind given the great depth of the country’s waters.

For a typical offshore wind farm, located around 10 kilometers offshore, most waters lie in the region of 250 meters deep, making fixed-based platforms unfeasible in over 90% of its waters. With wind speeds in the region often averaging at more than 10 meters per second, rivalling that of even the North Sea, Hexicon CEO Marcus Thor stated “Greece has great potential for floating offshore wind power with some of the best winds in Europe.”

The new JV will be named Hexicon Power, aiming to help reach Greece’s target of having 60% of its electricity produced from renewables – up from just under 40% today.

The move also echoes Hexicon’s formation of the MunmuBaram JV with South Korean company Coens and Shell Overseas Investment, which will develop and operate a 1.3 GW floating offshore wind farm, up to 80 kilometers off the coast of South Korea, followed by a 1.7 GW project at a later date. It is also similar to the 50/50 AvenHexicon JV – with Avapa Energy – which aims to develop floating wind projects off the coast of Italy.

Hexicon’s differentiation in the early floating wind market is its patented TwinWind design. Each platform of this design hosts two wind turbines, which rotate about a shared mooring point depending on the prevailing wind direction. This varied from traditional floating designs where individual nacelles must rotate to align with the wind. 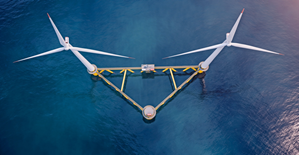 The obvious benefit of TwinWind is that it packs more generation capacity into each floating foundation, and for more turbines to be deployed over a given amount of sea acreage. Hexicon claims that this will increase the energy yield of floating wind projects, but the key benefits here are most likely to be associated with splitting the infrastructure costs normally associated with one turbine, between two instead.

The company claims that the inter-array cabling of a Hexicon wind farm is reduced by as much as one third, with more turbines located within a smaller area. The amount of steel required for turbine foundations is also significantly reduced per MW of rated capacity, while installation costs are also reduced through fewer wet tows and mooring installations.

Like most floating wind designs, TwinWind can be assembled onshore and at port locations, allowing for a fully commissioned system to be ‘wet towed’ to the offshore site from which it will operate.

Hexicon has yet to physically install any of its turbines however, so in-situ evidence of increased generation has not yet been demonstrated. Hosting two wind turbines so close together poses its own risks. Traditionally wind turbines are spaced out laterally by 7-times their measured rotor diameter and, if placed too close together, increased turbulence and air blockage will reduce the amount of wind captured by each turbine.

Another potential issue is that of unit failure. If one turbine is forced into shutting down, the other will have to do the same to prevent asymmetrical loading and any unwanted platform rotation – forcing one perfectly good turbine out of use. Given that the availability of offshore wind turbines can be as low as 90%, this could significantly reduce the gross output of each turbine on an annual basis.

Hexicon’s success will depend on these tradeoffs of lost generation efficiency against reduced capital requirements in cabling, steel, installations and maintenance. It will also depend on how well it can reduce the wake effect for downwind turbines, as it claims it will be able to. The company claims that “the TwinWind can be viewed as a micro wind farm of two turbines which weathervane so that neither of the turbines are effected by the wakes from upwind platforms.”

Along with the partnerships in Italy, Greece and South Korea, Hexicon is looking to deploy its first full-scale platform – featuring multi-megawatt turbines – in 2023, in Norwegian waters of over 200 meters in depth. It has agreements in place to deploy a 32 MW platform in the UK’s Celtic Sea with Bechtel, as well as the potential 100 MW Pentland Floating wind farm in Scotland with CIP. The company has also set up other JVs in Sweden with Aker Offshore Wind and on the Iberian Peninsula (for Spain and Portugal) with Wundersight, named Freja Offshore and WunderHexicon respectively, and is reportedly in discussion with partners in South African, Irish and American markets.

Most of these deals have come within the last year or two, as part of a flurry of activity in the floating wind space. Inspired and somewhat facilitated by the success in offshore wind, as well as its cost reduction, floating foundations will allow offshore wind turbines to be positioned further away from shore, reducing visual impact and improving the available wind conditions.

As of 2021, there are just three floating wind farms in operation: Hywind Scotland (30 MW), WindFloat Atlantic (25 MW), and Kincardine (50 MW). However, the global project pipeline recently stormed past 54 GW, much of which will be installed prior to 2030, and with over half of this set for European waters.

This marks a huge opportunity for European OEMs to reaffirm their market lead under lingering pressure from their Chinese rivals, taking an early lead in the floating market.

The wind sector is still in the brainstorming phase in terms of floating technology, with over 20 variations currently competing for attention in the market. The industry will experience radical consolidation. While oil and gas developers may disrupt this by trying to develop their own designs through the transition away from fossil fuels, we predict that once the market matures, only 5 or 6 designs will be commercially viable, with Hexicon sitting alongside current favorites Principle Power (WindFloat), Fukushima (Forward), and Ideol (Floatgen).

Semi-submersibles could have a significant advantage here if costs and construction requirements can be cut, with spar buoys posing difficulties outside of their home country of Norway, where near-shore water depths are not sufficient. Innovative approaches to improve power production, and sharing the costs of infrastructure – potentially even with tidal power – are likely to prove vital in winning the race.