Eight transmission projects in the Australian state of New South Wales (NSW) will receive $3.2 billion from the federal Rewiring the Nation scheme and $2.1 billion from the state-level Transmission Acceleration Facility, according to announcements made in late December. These lines will cover the Snowy Hydro pumped storage project and tens of GW of wind and solar across the state’s Renewable Energy Zones (REZs).

A similar agreement in October with Tasmania and the neighboring state of Victoria saw a spend of $1.5 billion from the Rewiring the Nation plan for Victoria’s Renewable Energy Zones, offshore wind in the Gippsland region, and the Victorian segment of the Victoria-New South Wales Interconnector (VNI West) KerangLink. Victoria also agreed to contribute an equal share of 20% of the cost of the Marinus Link to Tasmania alongside Tasmania and the federal government. Federal funding for the Link will come to $1 billion in low cost finance.

The specific transmission projects funded by this latest New South Wales announcement are as follows:

The Rewiring the Nation program, one of the central policies of the Labor government elected in 2022, has $13.5 billion to spend, with the Victoria-Tasmania deal and this New South deal being its first two major expenditures. Under the previous government a similar but much smaller commitment was a $200 million federal contribution to EnergyConnect, a 330 kV, 800 MW, 900 kilometer line between South Australia and NSW which began construction last year. New South Wales own Transmission Acceleration Facility, announced in June alongside mention of 16 GW of pending renewable planning applications, has $800 million allotted just for 2022 and 2023, which the state government hopes will drive almost $10 billion of private investment.

Victoria and New South Wales hold the majority of Australia’s population and their grids continue to feature the vast majority of the country’s coal capacity, including 4.5 GW of actively used lignite in Victoria – coal is still half of Australia’s power mix. In contrast, sparsely populated Tasmania has 2.6 GW of hydropower and a pipeline of 8 GW of renewables, most of it wind including several GW offshore. Its targets have it reaching 150% renewables in 2030 and 200% in 2040.

According to the Australian Energy Market Operator (AEMO), investment of $114 billion will be needed in generation, storage and transmission through to 2050, with O&M being almost as much again. The first order of business is replacing coal and gas with 120 GW of renewables, which according to AEMO will require 10,000 kilometers of transmission.

AEMO’s 2021 Transmission Cost report features dozens of potential renewables-enabling transmission projects, many of them on the order of hundreds of millions of dollars and several costing billions. The report finds that renewables will have a grid connection cost of around $100 per kW, for feeder lengths of 5 kilometers to 10 kilometers. Batteries with no feeder length will cost between $45 per kW and $67 per KW according to connection voltage varying from 500 kV to 220 kV. 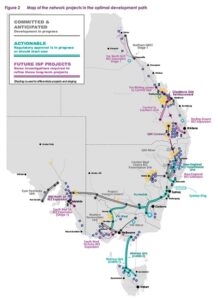