BESS to see mass adoption of alternative batteries alongside li-ion 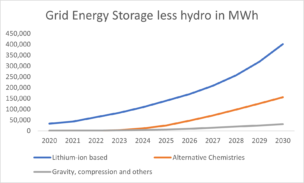 The energy market is at the take-off point for energy storage, not just in the US, as so many US forecasters seem to think, but around the world, according to a new report from Rethink Energy which forecasts Energy Storage to 2050.

All previous forecasts seem to be only 10 years out and rely purely on existing pipeline, but the energy storage market is being driven by the ramping up of discreet contractual supply line deals of raw materials and the build out of 2 TWh worth of annual giga factories spread across the entire globe (See our Gigafactory report).

The 2031 numbers compare better to our forecasting rivals, who refuse to forecast out for 30 years, and show that 2,327 GWh of storage will cumulatively installed by 2031, and the annual additions that year will be 132 GWh, with an installed output capacity of 690 GW.

All Rethink Energy rivals only forecast up until 2030 and are forecasting as little as 25% of our expected numbers.

While MOST of this capacity will be in the form of lithium ion battery, Rethink believes that as much as 29.5% will come from alternative energy storage sources by 2030. This will act as a springboard for their prospects in long duration storage, where lithium ion is not certain to dominate.

This represents a huge fall from grace for lithium ion batteries from a point where today they make up 95% of all new BESS projects. By 2030 the installed base of total grid battery systems will be just over 69% lithium ion, just under 25% alternative chemistry battery, with a final 4.5% for physical systems – gravity, compression and others. Hydro will begin to fall away rapidly after 2030.

Rethink Energy believes that lithium ion NMC and NCA batteries clearly demonstrate the highest energy-to-mass densities needed for the Electric Vehicle market. But slowly this will lose out, both in EVs partly to LFP, which is less prone to thermal runaway, and eventually to solid state lithium ion, also less prone. And between now and 2027 the US market in particular will have too little lithium ion resource and this will make it too expensive for the grid market, giving an alternative battery chemistry a brief five year period in which to flower.

Any new company using an alternative battery chemistry which manages to ship more than 1 GW of battery in a year, and then doubles its installed base at least once, and preferably twice, all before 2027, will have a cost base that will mean it will be able to continue to secure business against lithium ion in the longer term.

The report identifies key companies which are likely to achieve this.

The cost of lithium ion will then begin once again to fall in step with these alternative chemistries by 2027, and we see lithium ion increasing its market share of energy storage and BESS after this, but not being so dominant as to squeeze out any player that achieves established status prior to 2027 – any who do will have a serious shot at the long term duration storage market.

Alternative chemistries will rise from 1,331 MWh installed today to 155,778 MWh of battery by 2030. Although Gravity and Compression BESS systems currently have more installs than alternative chemistries, at 2,000 MWh, they will only rise to 31,189 MWh by 2030. This is enough for a number of companies to make money, but not enough to take more than 0.7% of the cumulative global BESS market, with alternative chemistries taking 3.3% and Lithium ion 8.6% and hydro the rest. Go here to order this report https://rethinkresearch.biz/reports-category/rethink-energy-research/