Giant Danish power company, Ørsted, has applied for permits to build four more large-scale offshore wind farms around Sweden in the Baltic Sea. The planed wind farms will reach 15GW in capacity and will add to Ørsted’s Swedish portfolio of two other projects which amount to 3GW.

Granted that all the necessary permits and authorizations are given to the Danish firm, Ørsted aims to deliver the first of the six projects – Skåne Havsvindpark – by 2029 with the other five by 2032. This will also represent Sweden’s first commercial scale offshore wind farm. At the end of 2022, Skåne County Administrative Board approved the Skåne project as eligible for a permit and sent the matter to the Swedish Government for a final decision. 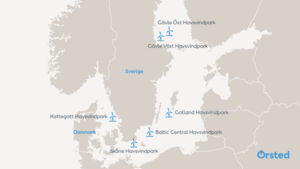 Sweden’s electricity mix is currently comprised of around 43% hydro, 30% nuclear, 15% wind, 7% bioenergy and a very small fraction from fossil fuels – less than 2%. With an installed capacity just short of 13GW of onshore wind turbines, the Scandinavian country can reach around 31GW of combined onshore and offshore capacity by 2032 if all the aforementioned farms are built to full capacity – enough to provide for around half of the country’s electricity. Combined with the state’s hydroelectric capacity most of its electricity could be generated from clean, sustainable sources which might make the Swedish government decide to finally phase out nuclear power reactors – a decision taken initially in 1980 but eventually reversed in 2010.

The timeline of the projects may seem long but Ørsted’s full portfolio of upcoming projects in the North and Baltic Seas combined with supply chain issues, outdated infrastructure and permitting delays puts this into context. The known issues, that have lately been troubling the seas which the wind industry is trying to sail through in order to help Europe reach energy security, are set to be tackled by various measures around the globe.

Meanwhile the director of the US Bureau of Ocean Energy Management (BOEM), Amanda Lefton, will step down from her position, as Elizabeth Klein, a senior official from the Department of Interior, will begin her tenure with a proposal of rule changes aimed at streamlining the costly and cumbersome US offshore wind permitting process. The move is thought to be capable of potentially saving the industry around $1 billion over the next 20 years.

At the same time, Scotland is planning to raise its offshore wind target as it recently announced that two ports on the Cromarty Firth have been given the ‘green freeport’ status along with $64 million in start-up funding to develop next-generation manufacturing hubs for the upcoming giga-scale build-out of offshore wind in the North Sea.

The next few years are shaping up to be defining, to say the least, not only for the wind industry, but also for Europe as a whole. With favourable solar irradiance only seen by southern countries like Portugal, Spain and Italy the norther countries of the continent will mostly rely on wind to help hydro – where applicable. Countries like the UK for example don’t have much hydro capacity and will have to rely on wind generation from the North Sea for most of its electricity mix.

A more detailed overview of the immediate future of the wind industry can be accessed via a research paper titled “Wind industry blown off course by recession – promises a full recovery. ”