The US Departments of both Energy and Transportation have teamed up to score a massive “one, two” in favor of US decarbonization this week, with $8 billion of funding being found to transform the US energy grid, and existing regulations on major transport routes being eased to make transmission permitting straightforward.

The combination of the two announcements is an open invitation for investors to pile into a transformation of the US grid, along the lines published in the famous (infamous) Seams study in 2018. This was written by a National Renewable Energy Laboratory (NREL) team including Joshua Novacheck. The report was suppressed by the Trump Administration until there was an expose and public outcry last year.

Essentially the report showed if the US would connect the two grids either side of the Rockies, the outcome would be a huge fall in electricity pricing, and better use of renewables and all it would need is a huge up front investment in transmission lines, especially long distance HVDC lines running East to West. Such lines could trigger spending on American wind and solar generation to increase it by almost 50%, unlocking around 60,000 megawatts of new clean energy capacity in the US. The new report entitled, Transmission Projects Ready to Go: Plugging into America’s Untapped Renewable Resources, was produced by Americans for a Clean Energy Grid.

The likely outcome will single handedly trigger 600,000 jobs building new transmission and another 640,000 building solar and wind projects that immediately become viable the moment such transmission lines are put in place.

It is being hailed as a move that would have saved the Texas grid from being caught out by freezing temperatures earlier this year, because it could have imported energy from other states less affected by the big freeze.

Energy Secretary Jennifer Granholm announced that she would make available two financing tools which should trigger further funding from private sources – the Western Area Power Administration Transmission Infrastructure Program is a $3.25 billion fund which any business can leverage as a form of low-cost capital for transmission projects that will unlock renewable energy in the West – and a further $5 billion in loan guarantees from the DoE loan program, again to support transmission projects to include high-voltage direct current (HVDC) long distance systems, including connections to offshore wind, and facilities sited along rail and highway routes.

The Department of Transportation is issuing new guidance that will enable the use of existing rights-of-way to facilitate the siting of transmission lines.

In the statement announcing this funding, the DoE pointed to a major piece of independent research that identifies over 20 major transmission projects that are “ready to go,” which has been prepared by the Energy Transitions Commission.

The Energy Transitions Commission says it is a global coalition of leaders from across the energy landscape committed to achieving net-zero emissions by mid-century, in line with the Paris climate accord, made up of energy producers, energy-intensive industries, technology providers, finance players and environmental NGOs. Members include Spanish utility giant Iberdrola, Danish Multi-national power firm Orsted, Italian infrastructure firm SNAM, European steel maker ArcelorMittal, BP, Drax, Shell and a handful of major European financiers. There are almost no US members.

Its report lists the projects in the diagram below which add up to over $33 billion, which could easily be leveraged with just this $8 billion and which was prepared by Grid Strategies. The report refers directly to the Seams study that was conducted by NREL, although the project list does not precisely dovetail into it. Grid Strategies is based in Washington DC, and is actively engaged with the Federal Energy Regulatory Commission (FERC), Department of Energy, state Public Utility Commissions, Regional Transmission Organizations and the North American Electric Reliability Corporation (NERC).

In principle the Seams study was about taking every type of major electricity generation – solar, wind, hydro, nuclear and thermal, and ensuring that the regions which depend upon them could all swap electricity. In particular this really helps cut curtailment in solar systems which are at the peak of their generation in regions like California, when New York City is sitting down to its supper in prime time. 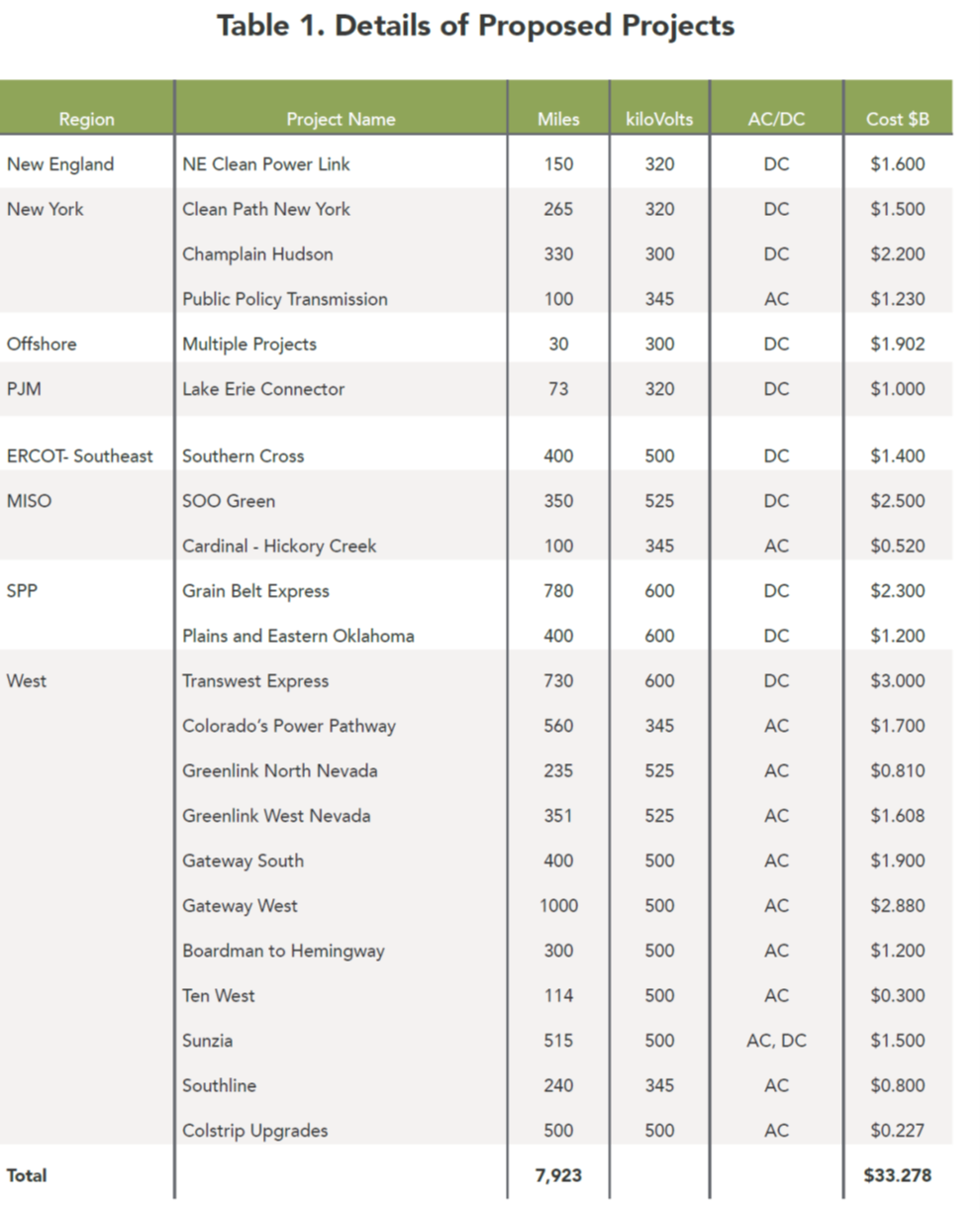 The Seams study demonstrated that stronger connections between the US power system’s massive eastern and western power grids would accelerate the growth of wind and solar energy—hugely reducing American reliance on coal, the fuel contributing the most to climate change, and saving consumers $billions. It was seen as a very elegant solution to a complicated and controversial problem.

Interestingly many of the same issues are found in China, where the east/west and north/south divides offer a similar problem. Last August China committed to a similar build out of transmission, mostly to prevent huge solar curtailment. A side effect is that it can also reduce the amount of battery energy storage that the system requires in order to operate effectively.

China committed to spending a lot of money upgrading its transmission infrastructure, so that renewables can come from their sources in West and Northern China, to Beijing and Shanghai.

China is now saying that successes in transmission systems and in energy storage will allow it to actually use more of its renewable energy, instead of curtailing it. That very same issue of having most solar energy 3 hours to the west, away from population centers is very similar to the US issue.

If California sun at say 5pm Pacific Time could power New York suppertime at 8pm Eastern time, in real time, then you have an easier time, using more solar energy in real time, and less of it needing to be stored overnight. It’s the same for Qinghai and Shanghai.

Below is a map of the proposed 20 projects which the Energy Transitions Commission says can be kicked off as soon as investment is found. 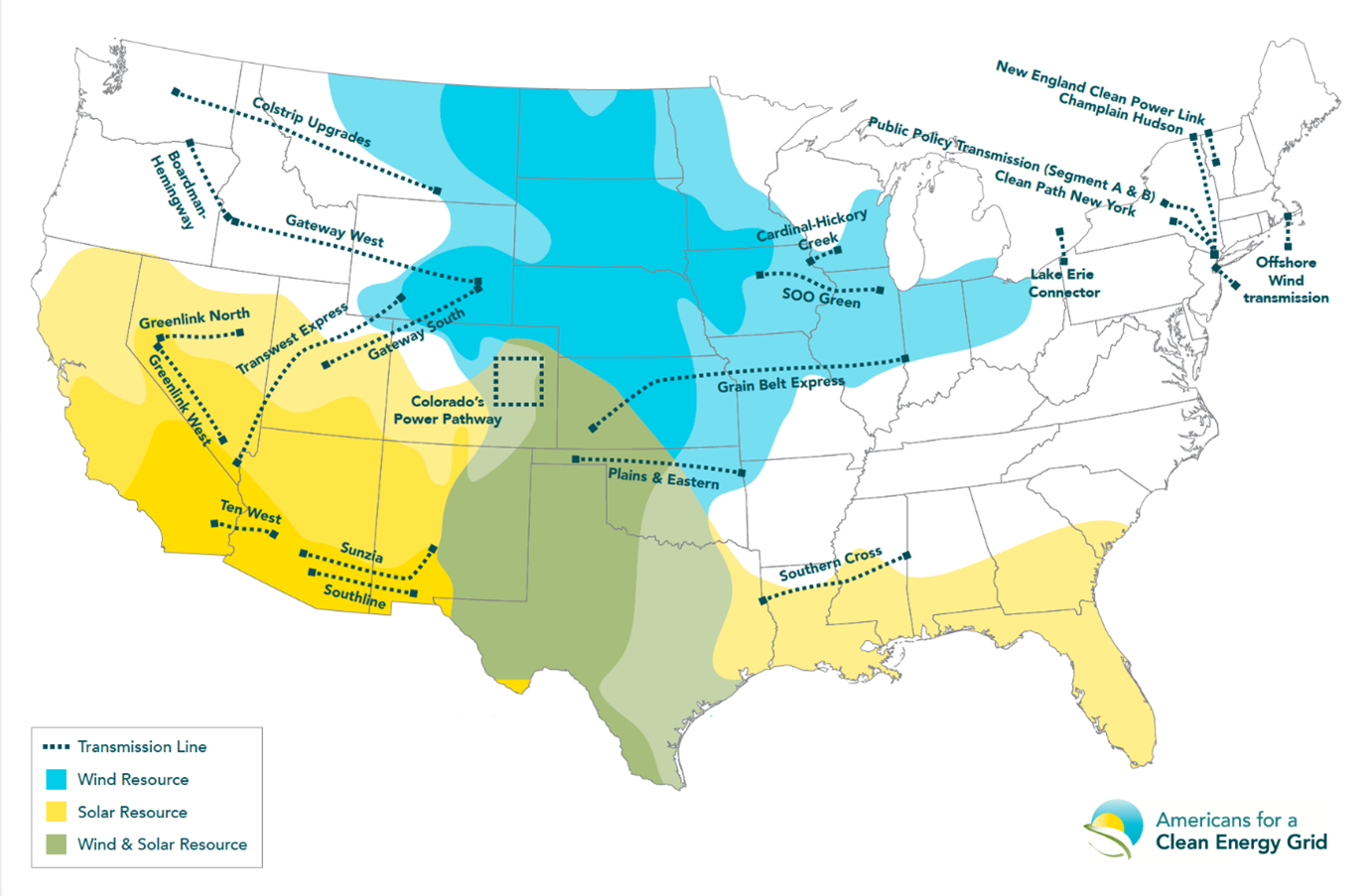 “The DOE is making financing available for projects that improve resilience and expand transmission capacity across the electrical grid, so we can reliably move clean energy from places where it’s produced to places where it’s needed most,” said Energy Secretary Granholm. “This is a down payment on our efforts to modernize our transmission nationwide. These investments will make our power system more resilient against threats and more reliable as we increase our clean energy capacity, creating thousands of jobs in the process.”

These regional and interregional transmission lines would not only bring quality wind and solar resources to areas with high demand but also increase economic development and grid resiliency as well as provide cost-savings for consumers.”

The report recommends that there should be a transmission investment tax credit; that the Government kicks off proceedings as the “anchor tenant” customer; that the Federal Energy Regulatory Commission (FERC) reforms transmission planning and cost allocation.

“Just like the federal interstate highway system helped drive the growth of the American economy in the last half of the 20th Century, an interstate electricity transmission system is needed to power the American economy into the 21st Century,” said Michael Goggin, lead author and Vice President of Grid Strategies, LLC. “Over 1.2 million jobs can be created by building transmission lines to access untapped renewable resources, bringing sorely needed jobs and economic development to America’s rural areas. A stronger grid is also the best solution for preventing power outages, like the tragic events that affected Texas and other parts of the Central US in February.”