A flurry of activity over recent weeks has seen yet another EV player stirring up attention in the EV market, with UK-based start-up Arrival showing enough promise to warrant a $118 million investment from BlackRock.

The investment, announced on Wednesday, aims to help to fund the early expansion of Arrival, with $46 million earmarked for the production of a new manufacturing facility in South Carolina, USA, which will start production in Q4 2021.

This is the latest push of finance into the EV sector, which places the value of Arrival at approximately $3.5 billion, according to those familiar with the deal. The five-year old company has previously raised $111 million from Hyundai and Kia, as well as an undisclosed amount from logistics firm UPS.

Unlike several companies that have seen gargantuan growth off the back of their EV plans, Arrival’s valuation can be partly based off its order book.  Back in January, UPS announced plans to buy at least 10,000 Generation 2 battery delivery trucks between 2020 and 2024, with the potential to expand this by a further 10,000. This week, Russia’s Department of Transport also announced plans to introduce Arrival’s electric bus in Moscow, although a timeline has not been announced.

The interest in Arrival is largely around its innovation in the manufacturing process, which claims to provide electric trucks and buses with 50% savings in operational costs for fleet owners. This hinges on a low capital approach, through distributed ‘microfactories,’ which can produce 10,000 vans or 1,000 buses per year and can be deployed within just 3 months.

Along with proprietary in-house components and software, Arrival claims that these small-scale microfactories can be profitable at deliveries of just several thousand units each year. The vehicles themselves will use modular, thermoplastic components for body panels, allowing rapid assembly and part replacement, and removing the need for painting or welding in the manufacturing process. Along with other composite components, Arrival’s design is based on a ‘plug and play’ skateboard style design, which is assembled robotically. In theory, this will lead to an abbreviated lead time for vehicles of just 6 months.

This approach also aims to reduce the cost and emissions from product distribution, in both production and service. With a route-to-market targeting fleets that are based in close proximity to each microfactory, Arrival claims that this will reduce the lifetime cost of each unit within a fleet by between 40% and 50% compared to existing vehicles, when including all phases of service and maintenance. The initial retail cost, however, will be higher, despite Arrival not yet announcing its pricing – it could even end up steering towards a fleet leasing model.

While the commercial electric vehicle market ramps up dramatically, having tripled in market share in Europe this year, the opportunity in electric fleets will be key to early mass-adoption, accelerated by corporate policy. This week, UK utility SSE has joined those urging the government to introduce a ban on diesel and petrol vehicles for corporate fleets by 2030. In the US alone, demand of electric fleets for ecommerce is predicted to reach 8 million by 2030.

In terms of practical progress, Arrival is moving closer to production, along with competitors in the market like Workhouse and Nikola, having made recent changes to the Alpha prototype and recently released the new Beta prototype commercial van, with deliveries set to begin in Q1 2022. 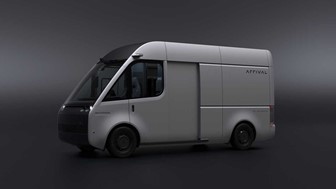 Arrival will use cylindrical battery cells from LG Chem, which it will manufacture in house at sizes between 44 kWh up to 130 kWh. At the upper end of this, Arrival’s vans should offer a range of well over 100 miles per charge with cargo and frequent start and stops. This range may seem small, but in urban territories that suit Arrival’s microfactory approach, the daily route of delivery vans is often significantly reduced. In New York, for example, the average delivery van only travels between 15 and 20 miles per day.

The microfactory approach comes in stark contrast to Tesla’s recently announced TeraFactories for EV components, building on the Gigafactory which already has a geographical footprint of 180,000 square meters. In comparison, the microfactories will use just 10,000 square meters, and will be distributed close to centers of demand – largely cities. Like Tesla however, Arrival is pushing for full vertical integration, with around 60% of components currently produced in house.

BlackRock has not been outwardly bullish on Tesla, and has instead pumped funding into competitors like Rivian, which is building 100,000 delivery vans for Amazon, off the back of $1.3 billion from the investment firm.