Boston Metal, a Bill Gates-backed start-up based in Boston (unsurprisingly), has announced that it has raised $50 million in its pursuit to decarbonize the steel industry. As one of the largest and hardest to decarbonize contributors towards global warming, breakthroughs from such companies could result in the largest transformation of steelmaking in the past 3,000 years.

The company, which spun out of an MIT lab in 2012, initially offered up $60 million through this recent funding round, according to a filing with the Securities and Exchange Commission, but has so far only managed to hit $10 million short of target, coming from eight unnamed investors.

This builds on previous investment from Bill Gates’ Breakthrough Energy Ventures, as well as Prelude ventures and The Engine (a fund for MIT spin-offs), with $20 million in funding coming in December 2018.

Since then, the company has grown from eight employees to nearly fifty, operating three pilot lines that can produce metal alloys for months at a time. While pure steel remains the ultimate goal, the company’s roadmap intends to pursue the commercialization of emission-free alloys to begin with. The reason behind this is that alloy production is less reliant on traditional infrastructure, high temperature requirements, and sunk costs.

Further down the line, however, rather than taking on the giant steel making incumbents, Boston Metal is hoping to act as a technology developer, licensing its technology to those that already have established a foothold in a millennium-old industry. According to CEO Tadeu Carneiro, the company is looking to have a semi-industrial cell line operating by the end of 2022, and between 2024 and 2025, open its first demonstration plant. Beyond this, the aim is commercialization.

Using renewable electricity, an MOE plant can theoretically eliminate energy intensive processes that are undertaken in coke ovens, sintering plants and blast oxygen furnaces. In theory, this could be entirely carbon-free. Rather than achieving high temperatures through combustion, the company passes an electric current between electrodes to create a molten oxide electrolyte, while also decomposing iron oxide into liquid iron. Using electricity to reduce metal oxide feedstocks, at a temperature of around 2,000 degrees Celsius, pure metal or alloys can be produced and extracted, with oxygen as the only byproduct. The purified metal pools at the bottom of a cell and is tapped by drilling into the cell using a process adapted from a blast furnace. The tap hole is plugged, and the process then continues.

Given that the major changes in this method of production or solely in technique, the downstream steel product’s quality should remain unchanged. 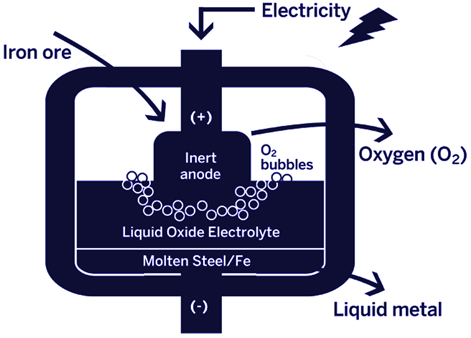 The benefit of this is not exclusive to the elimination of emissions. No water or reagents are used through the process. Without the need for large industrial facilities, Boston Metal is proposing a modular approach, allowing for more efficient capital allocation. Rather than having to invest billions of dollars in industrial facilities, the company claims that modular MOE plants can be developed for a cost in the order of millions.

As a result, the cost of the steel produced is also expected to be competitive with traditional steel from the start of commercial production, if electricity prices are between $15 and $35 per MWh. The lack of CO2 produced also makes the process less volatile to carbon pricing mechanisms which will see prices of conventional steel rise over coming decades.

Current processes using Blast Oxygen Furnaces often have a CO2 intensity resulting in more than 2 tons of CO2 for every ton of steel. Given that many expect the cost of carbon to rise to $100 per ton by 2030, and that it will apply to the steel industry, today’s prices of around $600 per ton could rise by one-third, solely off the back of carbon pricing.

With demand set to increase through a surge of infrastructure investment following Covid-19, many expecting prices to reach $1,000 per ton within a year. As the cost of carbon increases alongside this, the relative cost of low carbon steel will edge closer and closer to parity. 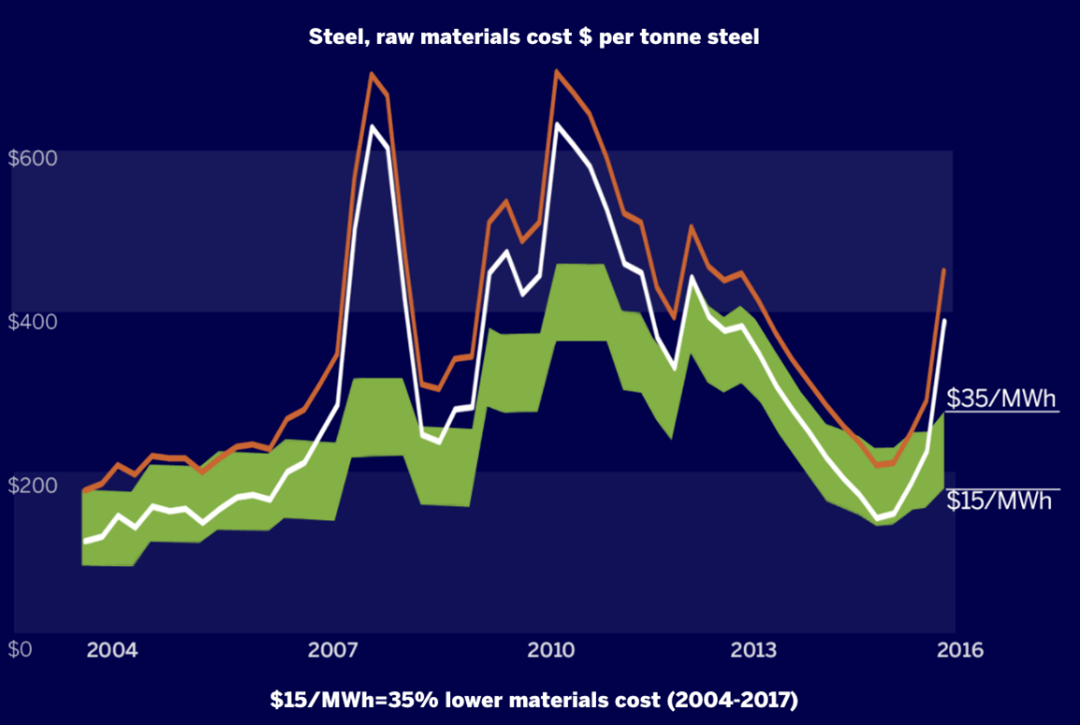 The global steel industry is responsible for between 7% and 9% of global emissions. While demand has dropped 6.4% through a stunted 2019, urbanization in developing economies, largely in Asia, is driving an increase of around 1.4% per year. Without new technologies, global steel demand is set to rise from 1.6 billion tons today, to 2.0 billion tons by 2035 and up to 2.8 billion tones by 2050. While some of the emissions from growth in demand will be offset by a three-fold increase in steel recycling, new steel production will have to increase to meet this.

Steelmaking, however, is often dubbed as one of the hardest sectors to decarbonize. Reducing processed iron ore to produce steel in a blast oxygen furnace (BOF), which accounts for the 90% of steelmaking emissions (both CO and CO2), requires temperatures of around 1,200 degrees Celsius. Low carbon options to generate heat at this temperature are limited; electrification of heat can only really be used for low temperature applications, and once you get to around 400 degrees Celsius both cost and technical barriers start to arise, as circuit components need to handle higher operating temperatures.

So, the race to decarbonize is on, with pressure building to not only save the planet, but to save the future of the companies that have become entrenched in steel production using fossil fuels. Naturally, this is happening across the steelmaking industry, not just at Boston Metal, and we’re seeing various approaches similar to those in other hard-to-decarbonize sectors.

Back in October, Rethink Energy wrote about the Hybrit collaboration between LKAB and SSAB in Sweden, which uses a process where iron ore pellets are reduced by hydrogen gas in a direct reduction process (DRI). This occurs at a lower temperature than in a blast furnace, and produces an intermediate product, sponge iron, with water vapor as a primary waste product which may be used to recover hydrogen fuel through electrolysis. The sponge iron can be used either to produce hot briquetted iron to be shipped elsewhere or melted immediately in an electric arc furnace (EAF) together with scrap steel. If powered by renewable electricity, this has the potential to remove over 95% of steelmaking emissions.

The further benefit of this is that it is agnostic as to whether scrap steel or iron ore is used as the feedstock. As the global stock of steel increases, so does the potential for a circular economy. By 2050, reduced losses, contamination and downcycling will mean that the availability of steel scrap in Europe could account for three-quarters of demand.

Other similar initiatives include a collaboration between Salzgitter and the Fraunhofer Institute, which aims to directly replace 30% of natural gas with hydrogen in the DRI process. Siderwin, an EU funded project run by ArcelorMittal, is using a similar electrowinning process to Boston Metal to extract iron directly from its ore, while Thyssenkrupp is also exploring ways to substitute hydrogen for coke in industrial heating processes.

These radical approaches are far superior to the incremental improvements being suggested by many in the industry. Since 1960, these gains have amounted to reductions of 60% in the energy consumed per ton of crude steel production, although largely not in the emission-intensive blast oxygen furnace, so CO2 intensity has only fallen by around 15%.

While these improvements are not to be sniffed at, they are largely economically driven, and will not represent the future of steelmaking. The reduction in energy intensity pretty much plateaued in the early noughties, and if we’ve learned anything from how Tesla has taken the automotive sector by storm, it is the revolutionary approach, not the evolutionary approach, that will transform industries through the energy transition.

This is the same argument that can be used in dispelling carbon capture or biofuels from the long-term future of steel. While it is estimated that BOF plus carbon capture and storage will be able to reduce the CO2 intensity of steel production by around 50%, this technology has had limited success so far. Some plants now have technology that has allowed it to capture and sell CO2 to nearby gas facilities, but the figure of 50,000 tons that some companies quote, only accounts for around 5% of total CO2 emissions.

Similarly, biofuels are only replacing small amounts of coal in the BOFs where it is used, and an increase in its use for steelmaking may undermine the need for biofuel elsewhere, especially when considering the vast amount of land Europe would need to dedicate to it just for current biomass plans, which do not yet include steelmaking. Again, this is another concept that was explored by Hybrit, ended by the possible toll on Sweden’s forestry.

The largest alternative source of steel production is direct reduction (DRI), using natural gas as a fuel, which can also cut CO2 intensity in half. But there are two problems here again: emissions are still fairly high, so if demand doubles then the absolute emissions will remain the same; and the cost of natural gas is still high in most parts of the world where steelmaking is a booming industry. DRI only accounts for 5% of global production, despite being a mature technology.