Caldera – betting against heat pumps – explains its own hot idea

It does not sell heat pumps, but instead focuses on the 15% of homes in the UK which are not connected to the gas grid – and which resort to the more expensive heat options right now of oil based central heating, typically for a larger, more poorly insulated, older home.

CEO James Macnaghten, explains, “Our aim is to initially target the 3.7 million UK homes that currently use heating oil. Our heat store runs off cheap electricity, which can include solar, but is more likely to use off-peak pricing and demand response,” (when utilities want to get rid of some electricity and offer it cheaply if you will let them choose when you use it). 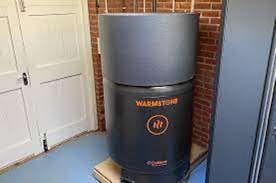 “It weighs 1.7 tons, and holds enough heat to warm a UK home during winter for 24 hours. It sits next to the building or in the garage and it has nothing flammable in it, and it is designed to offer an alternative to heat pumps, which will likely not work for many older buildings.”

How so, you may ask? The all-encompassing love of heat pumps is well known in “green” circles, so how come there is a class of building they won’t work for? We have to sum up here what turned out to be a 30 minute conversation, essentially there are many extra costs that can be involved when you install heat pumps – they work best sending water at 40 degrees around your home, and where they are on all the time. But most gas boilers put water into the water circuit at 65 to 70 degrees Celsius, and you may have to have a new buffer tank installed, and put in larger radiators.

If not you tend to run the heat pump at too high a rate and end up heating in real time, then it cannot take advantage of cheap electricity. “The Coefficient of Performance should be 3.5 or 4.0 ideally,” says Macnaghten, “but it can end up being more like 2.0 and you still end up using a lot of energy in real time.”

Stone and brick built homes are notoriously hard to keep insulated, and you need to put in cavity wall insulation and underfloor heating to be sure.

This is one of the key reasons that UK homes have not been able to take advantage of government subsidy offers to do a deep retrofit on a home and install heat pumps – if such a deal was financed by a leasing company, it may turn out that bills don’t go down as much as were hoped with a heat pump, because of funding the extra cost of insulation and brand new radiators.

So what is the Caldera solution? It’s just like a souped up version of an old storage heater, but more efficient – it uses a solid recycled material to hold the heat, is surrounded by a vacuum to prevent loss of heat, and then lagged and insulated. An electric element heats the internal material and when you want hot water or heat, you run water through it, and it comes out hot. It is based on large thermal stores used in industry today, but scaled down.

It is calling it a Warmstone heat battery and can store 100kWh for a standard home for 24 hours. Either the consumer can set times when electricity is cheap top draw or a demand response system could be set up by a utility – most UK utilities have a 5p per kWh offer at some time of the day, due to either overnight nuclear generation, which on old nuclear plants cannot be turned down quickly, or from plentiful renewable energy from solar and wind. Consumers can also store and use electricity from solar panels to cut their bills.

Macnaghten’s first job is to prove that his system is entirely fundable – today it will cost £12,000 to install the Caldera system including VAT, but because it delivers so much more punch than heat pumps, it can support a home that eats 15,000 kWh a year in heat, or considerably higher. Using heat pumps there is a concern that the older larger homes would not be warm enough, whereas Caldera is replacing like for like the heating effect of the heating oil furnace.

Macnaghten installed the first hand-built device in his own home, and has just finished testing it, the next stage is to do 10 local installations and collect data on them, first measuring the amount of oil they used before it was installed, then the electricity that the system uses, and the heat that comes out of it – the plan is to make this system highly bankable for lease finance whereby there is actually a guaranteed payback.

“If we can say to a customer, it used to cost you this much in oil, and now it costs this much less and saves you money, and unlike oil, releases no CO2 whatsoever, then it will prove highly bankable on a long term lease.”

Macnaghten also has dreams of partnering with utilities who can decide “when” to fill the Warmstone up with heat, based on its cheapest electricity, when most renewables are operating. We asked if he had ever talked to British Gas, who have a legion of installers and engineers, “Yes we did talk to them, their first question was ‘It weights how much?’ and although it is smaller than most heating oil reservoirs, the conversation got no further.

Interestingly his website has brought him 200 pre-orders, and as of now he cannot take money from them, but says that “Once we have done a site survey we will be able to take firm orders, and begin taking a financial commitment.” Utilities could also act as sales agents, if it smooths out their electricity demand, but they would have to set up arms-length finance, so that it did not act as a lock-in for one electricity supplier.

His partner, chief operating officer Guy Winstanley has spent his entire career on large systems manufacturing, and by next April, after the data is available from those first 10 homes, he will set up manufacturing. “We break even on 8,000 units a year, and there are 1.2 million heating oil installations in the UK that are replaced at between 40,000 and 50,000 a year.“

What about all those 85% gas driven homes, when will they be on the agenda? “We reckon that by 2030 the price will be down to £6,000 on our own learning curve, and then if the government is still looking for a solution to its home heat problem, ours will be affordable for gas boiler homes.” The only reason he says they are not right now is because gas costs about 70% the price of electricity for the same amount of heat. But as gas prices rise, and as home heat becomes more of a political hot potato, and carbon prices begin to eat into home gas prices, then perhaps Caldera will be in a good place to step in.