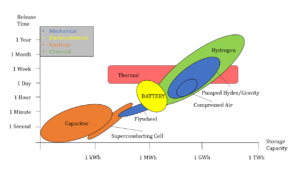 California is searching high and low in its quest to pioneer the shape of the US storage market, with new grant funding made available to facilitate research around long-duration methods. While it is true that scaling Lithium Ion to utility scale is probably not feasible, the low level of allocated funding suggests a serious bias towards green hydrogen or compressed and frozen air. If California is serious in weaning itself off natural gas, we would argue that funding may be better placed in gravity-based storage or developing a smart microgrid infrastructure in light of the continuous boom in residential storage.

The State of California’s Energy Commission (CEC) tabled the solicitation at the end of December, announcing $11 million in research funding for energy storage technologies other than Lithium-Ion batteries. The proposals acknowledge previous suggestions for the Commission to “consider green electrolytic hydrogen an eligible form of energy storage and consider other potential uses of green electrolytic hydrogen,” but other methods seemingly remain on the backburner.

Lithium-Ion is currently at the forefront of the Californian storage market. With the recent PG&E wildfires causing massive blackouts in the state, California has passed a first-ever $1 per watt subsidy to further distribute residential solar-plus-storage, allowing energy resilience, while simultaneously addressing the intermittency issues caused by an increased presence of renewables in the state’s electricity mix. This subsidy nearly covers the entire cost of systems like the Tesla Powerwall, and as all new builds are now mandated to incorporate solar generation, analysts predict that one in five of all solar installations in the state will be paired with storage in 2020.

Because of this, it’s hard to turn heads away from Lithium Ion. People understand and trust battery technology, and the financial sector has seen promising returns on battery investments in recent years. However, while costs are falling at unprecedented levels of around 9% per year as global manufacturing capacity explodes, Lithium Ion faces several major challenges when entering the market at a utility scale. Due to inadequate energy density, longevity, safety and pricing with scale, organizations like the CEC have highlighted that ambitious clean energy goals cannot be met with only current storage technologies.

This may have come as green flag to many in the US who are hell bent on keeping natural gas as the partner to renewables through the transition to net-zero emissions. To some extent this attitude is just the nature of a fossil-fuel addiction, but it’s a much easier statement to make this case when looking at the limitations of Lithium Ion batteries.

But achieving long-term, long-release storage at scale would essentially render natural gas redundant in the long run – something which clean energy advocates are very keen to do. However, new technologies are stuck in the Catch 22 scenario which is increasingly common within the energy sector: Emerging technologies need to prove that they can lower their costs to get investment, but also need investment to achieve the necessary economies of scale. This new grant from the CEC is therefore an early sign of California’s intention to inject some funds into the industry, but will likely fall short of causing any immediate impact.

The current $11 million level of funding is feeble, especially considering the cost of long-duration storage: pumped storage projects can often exceed $1 billion to build, and proof of concepts need to be solid before technologies are adopted at scale. Companies working on long-term storage may struggle to do much with the levels of available funding from CEC, indicating that the new grant is more earmarked for academic research within hydrogen and ammonia storage.

We are currently skeptical about Hydrogen as a form of large-scale storage. With efficiencies often around 30% after turning renewable electricity into hydrogen and then back again, batteries (~95%), gravity-based storage (~80%) and adiabatic compressed air storage (~80%) could be much more attractive at addressing the full spectrum of storage needs if given adequate investment.

The CEC has highlighted several technologies for some consideration within the funding scheme including flywheels, thermal storage, and diabatic compressed air systems. The latter of these may take inspiration from the recent Highview Power Storage project in Vermont.

This project will be the first long-duration liquid air storage project in the US, in collaboration with Encore Renewable Energy. Proposals detail a 50 MW project with the ability of providing 8 hours of power to ensure reliability in a grid which is becoming increasingly reliant on renewables. Highview currently operate two liquid-air facilities in the UK, where air is cleaned and compressed into liquid form before being stored in cold insulated tanks. As air is warmed at times of low renewable generation, additional power may be supplied to the grid. However, the efficiency within this project is unlikely to exceed 40%, with adiabatic compression not yet commercially realized, meaning the method faces similar performance issues to hydrogen.

An exciting area for focus may be within mechanical storage such as the gravity-based systems developed by Gravitricity and Energy Vault, which already claim the ability to enter the market at competitive prices and scale (See our previous article here). More likely, with coastal access, this could include pumped-hydro storage, building on projects such as PG&E’s 1.2 GW Helm’s facility.

The need for long-term storage could also be alleviated if the number of storage facilities is increased – providing statewide blackouts are avoided. PG&E is showing signs of single-handedly reversing the current slowdown in the US microgrid market, which may mean that the amalgamation of residential storage and electric vehicles in the state provide an accumulation to a virtual, large-scale storage facility – if power is adequately managed by TSOs and smart storage developers.

California has been at the bleeding edge of the US’s early push towards decarbonization, in spite of dwindling support at national government level. The state is one of the largest contributors to renewable capacity in America, responsible for 46.8% of the electric vehicle market and the largest share of both residential and non-residential storage markets and will likely pave the way for the growth in storage across the US.