A report from the Universidad Tecnica Federico Santa Maria and the Fraunhofer Chile Research Foundation predicts that Concentrated Solar Power (CSP) plants could be built in the northern Atacama Desert area with a levelized cost of energy (LCOE) that falls to $76 per MWh around Copiapo, the mining town and capital of the Atacama Region.

The projected prices varied around an average of $89 per MWh in a large swathe of territory from the far-north Arica province, down through Parinacota, to the northern part of Coquimbo province, whose capital La Serena is 400 km north of national capital Santiago. This $89 per MWh territory combines solar irradiation of over 9.5 KWh per meter squared per day

The report says factors such as capital costs, opex, electrical output, topography, and water/grid/road access, were defined by geographical location. The resulting formula was used to generate a cost map for a modeled 130 MW, 30-year CSP project at locations throughout Chile. This methodology could be a useful tool to apply to other countries for locating niche CSP plant sites. 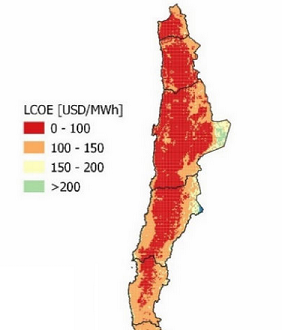 A crop of the report’s LCOE map, showing the northern part of Chile.

The region is seeing multi GWs of solar PV development, pushed by mining – which is a big fraction of total Chilean electricity consumption. Copper exports make up 20% of government revenue. The Atacama is also the global hotspot for Direct Normal Irradiation – the measurement relevant to CSP power – with some areas over 3.6 MWh per meter squared per year. The sky is free of clouds for 300 days each year – relevant since clouds are a big problem for CSP plants, causing shutoffs in some Chinese pilot projects.

As the report describes, the area’s low humidity of 30% to 50% is a benefit, as too much humidity interferes with the operation of the dry condenser component in the CSP tower. The condenser is used to cool the Rankine steam cycle – an air based dry cooling system is needed in the desert, because of water scarcity.

The report from the Chilean university and Fraunhofer Chile reconfirms the above Irena predictions from January 2018, from a report which predicted 2020 as the turning point for CSP. A cost range of $70 per MWh to $100 per MWh globally was anticipated, grid connection cost included. 2019 saw two record low CSP bids – $71 per MWh in Morocco and $73 per MWh in the UAE. 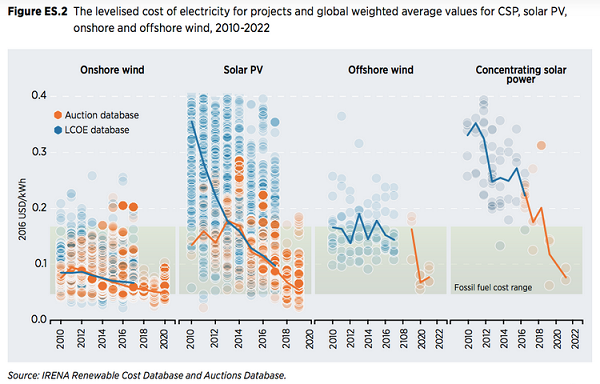 Cerro Dominador is 90% complete, but was delayed in November by a fire which broke out amongst wooden scaffolding and platforms, destroying electrical equipment at the top of the receiving tower. Although no equipment deliveries have been delayed, work has been placed under Coronavirus social distancing measures. Now only tower piping and the last steps of commissioning remain. Economic fallout from the lockdown will make it hard to sign additional PPAs, but the project has a 5-year PPA from December with fuel distributor Empresas Copec.

EIG Global Energy Partners is also developing the nearby Likana CSP project, which it acquired in October. The project weighs in at 450 MW and will place a bid in Chile’s June auction next month. The auction doesn’t discriminate by technology, so the project’s CSP will be going up against all other types, including combined-cycle gas turbines. EIG is working with many EPCs to keep their costs as low as they can, and CEO Fernando Gonzalez claims it will be competitive, and a new world record for CSP.

Several other sites have been examined by the company for potential CSP developments, but with Coronavirus lockdowns slashing electricity demand and economic activity, these are most likely on the back burner for now.

The presence of multiple large-scale CSP projects in the country has positive implications for the CSP supply chain there – even in China, most of a batch of pilot CSP projects experienced huge delays, partly due to supply line issues. However, several of these projects have shown signs of life in 2020, and Chinese EPC groups have an increasing presence in Chilean developments.

The Fraunhofer Chile Foundation has also previously considered, in 2017, that the heat of CSP plants could be used for Multiple Effect Distillation (MED), a distillation process that uses relatively low temperatures of under 70°C. Land near the coast doesn’t have good solar resource and is more costly to acquire, so this would have to involve seawater pipelines leading further inland, such as the 145 kilometer connection to the Esperanza mine.

Chile has a 60% renewables power target for 2035, up from the current value of around 20%. A rise in renewable generation will help make CSP attractive, due to its strong heat energy storage component in the form of molten salt. 1.1 GW of Chile’s coal plants will be closed by 2024, with the remaining 3.9 GW following by 2040, but that will still leave Chile needing another 1.5 GW of dispatchable capacity in the next five years.