Last year was a big one for China’s Concentrated Solar power (CSP) sector. More of its belated fleet of CSP pilot projects reached completion and CSP capacity was planned alongside wind, solar and batteries in GW-scale hybrid desert complexes. And behind the scenes the Chinese state has supported it with new regulations.

The State Council, the State Grid, the National Energy Administration, and the National Development and Reform Commission (NDRC) have all weighed in, throughout the course of 2021 with policies geared towards promoting energy storage on the grid. In most cases the policies are generic for all forms of energy storage and dispatchable clean power – hydrogen, batteries, CSP, pumped hydro, pumped gas, flywheels, and more.

One of the more recent policies has been the National Energy Administration’s “Notice on Promoting the Integration of Power Sources, Networks, Loads and Storage and Multi-Energy Complementary Development in 2021”, which required priority on the grid to be granted to energy storage sources, as well as its December inclusion of solar thermal capacity in the category of “Electric Auxiliary Services” along with virtual power plants and the other energy storage types.

China has a long way still to go in terms of deregulating and liberalizing its power market, with time-of-day pricing still crude and capped. As such energy storage capacity has to be promoted through dedicated policies and initiatives. China’s battery deployment is entirely contingent on its province-level co-located energy storage requirements for renewable power plants.

China’s CSP capacity began with state-backed pilot projects, and the new plans for CSP in complexes are owed at least in part to the State Council and other bodies’ vision and directives. Because CSP is capital-intensive and still needs more R&D done, China’s smaller companies have not been eager to adopt it, but certain state-owned enterprises are now entering the sector such as China Energy Construction and China Power Construction.

Then there is the subsidy of $181 per MWh for CSP projects which was extended to the end of 2021, with delayed pilot projects in mind.

For technology, it very much seems as if China is behind the West – since although its pilot fleet has a great variety of designs, they all use molten salt and liquid sodium as heat transfer fluids, in contrast to multiple Western startups. But one breakthrough that has been made in China is in supercritical carbon dioxide power generation technology, with the country’s first carbon dioxide supercritical turbine commissioned at the Xi’an Huaneng Test Base in December. Naturally the biggest appeal may be making coal and gas more efficient in the short term, but this technology will also be used for hydrogen and solar thermal power generation.

As far commissioning of new plants is concerned, the CSP industry has stagnated since 2019 – but development of a CSP project can take a long time especially while the industry is still small and young. Beneath the surface there’s a lot of activity, with China in particular likely to reach 15 GW by the end of the decade, as detailed in our CSP report Last Chance Saloon for Gen 3 CSP. 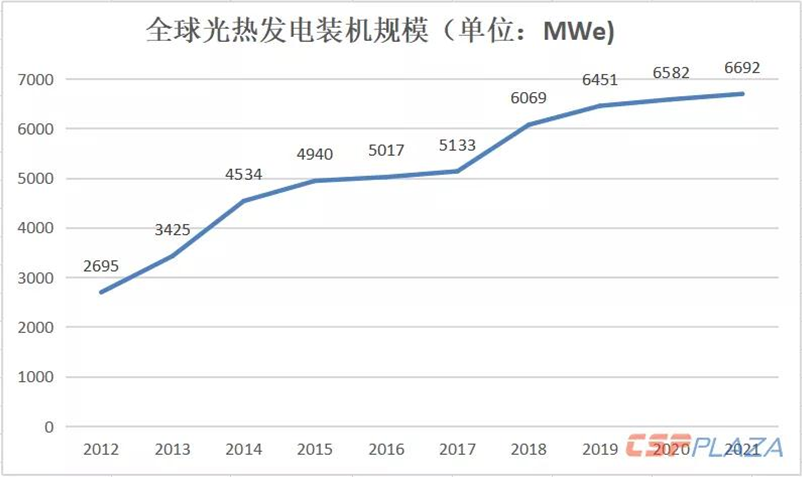 Chinese CSP developers are already responsible for almost all new plants worldwide, especially those using “Gen 2” technology as opposed to the more advanced designs from Heliogen, Vast Solar and other Western companies. So the better the industry does within China, the more economies of scale it will have to offer abroad, with Cyprus, Crete, Thailand, Brazil, being some of the less obvious destinations.

Kazakhstan and Iran are two other less obvious targets for CSP deployment – but they are right next door geographically, with similar or better conditions to those in China’s desert. Iran was described as likely to reach 200 MW of CSP capacity in our CSP report, a view which has recently been vindicated by the announcement in November that Iran will see a 17 MW CSP plant commissioned near Yazd by 2023. If not for the sanctions regimen reimposed by President Trump, Iran would be an active recipient of a lot of foreign investment into wind and solar power right now.

As for Kazakhstan, there have been no plans made explicitly yet, but the terrain and conditions are suitable, and the vast green hydrogen complexes will be able to use long-duration thermal storage alongside batteries to keep the electrolyzers constantly running. In the Chinese hybrid complexes being discussed right now, some of which serve green hydrogen, CSP capacity is usually 10% or less of the total, so Kazakhstan’s 45 GW Svevind complex could see several GW of CSP. It depends on what sort of offering CSP developers will be able to make in a few years’ time when decisions are made, and how that matches up to the cost declines of lithium-ion batteries.