China takes lead in all corners of wind power market

For both onshore and offshore wind, China is set to hold the title of the world’s largest market through the decade according to an upcoming report from Rethink Energy, as it will imminently overtake the UK in the offshore wind market. In fact it may have already done so.

These figures come from Rethink Energy’s latest forecast on global wind, out next week (email [email protected] for details).

Following a year of over 27 GW of installations, the end of 2020 saw the country reach a cumulative capacity of 237 GW of wind power in operation – 227 GW onshore and 10.4 GW offshore – making the country responsible for 34% of the global wind market to date.

Looking forward, China is expected to continue this pattern, and is set to only marginally reduce its global market share to 33% of installations to 2030. Through the decade, the country will see annual additions rise to more than 53 GW, with total capacity reaching 647 GW by the end of the decade. The current pipeline – which only accounts for projects in the coming three years – is already well over 100 GW.

While the growth of China’s power demand is somewhat uncertain, the country has built up a pedigree of smashing past its self-imposed targets: Chinese renewables are on course to hit between 32% and 34% in its total electricity mix next year, higher than the 31% target set out in its 13th Five Year Plan.

Following the announcement of the country’s pledge to reach net zero emissions by 2060, President Xi Jinping recently outlined a range of further targets to a virtual UN summit. These included a boost in combined wind and solar capacity to more than 1,200 GW by 2030, with non-fossil fuels providing around 25% of primary energy consumption in this period, which are likely to be confirmed in the country’s upcoming 14th Five Year Plan.

With Rethink’s recent forecast indicating a solar power capacity of 887 GW in China by 2030, the country looks set to smash past this target, with wind and solar alone providing over 1,500 GW of capacity. This will mark a three-fold increase from the 480 GW that the technologies are estimated to have reached at the end of 2020.

Such explosive growth in renewables now looks set to result in China passing peak carbon emissions by the middle of the decade. 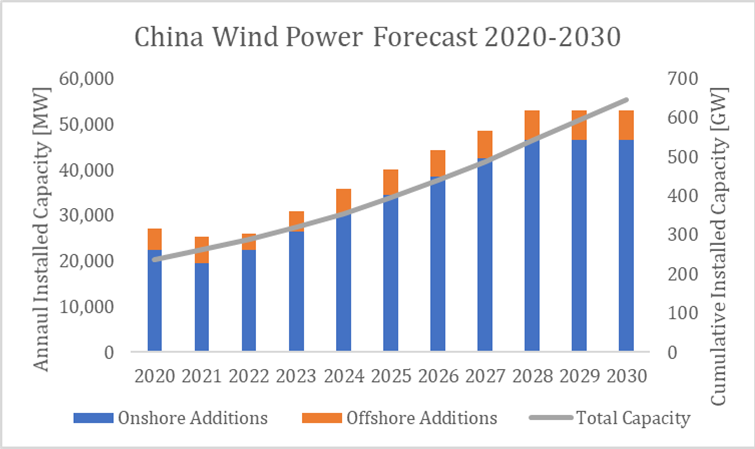 This lull is the result of a rush of projects coming online in Q4 2020, ahead of subsidy eligibility deadlines that have been imposed from January 2021. From the start of the year, new onshore wind projects will compete on an even playing field with coal and gas-fired power, receiving a reduced tariff of $0.042 per kWh if installed in 2020 (down 8% from 2019). The slowdown is also partially a result of China’s grid, which is facing unprecedented strain following a surge in wind power additions in remote regions.

To address these issues and the ongoing curtailment of wind capacity in remote western areas while the grid is updated with HV DC/AC long-distance lines, near-term investment is likely to prioritize the development of projects in the central and eastern regions of the country.

Once these issues have been resolved, investment is then likely to refocus attention on the country’s North and West, with a range of huge hybrid projects currently being proposed in the province of Inner Mongolia, due to exceptional onshore wind speeds and abundance of land.

High wind speeds will also be a key driver behind the emerging offshore wind market in China, which is set to reach 66.4 GW of installed capacity by 2030, making use of winds in the Taiwan Strait which are typically 20% greater than those in the North Sea. Throughout the period, offshore wind is set to account for just under 14% of total wind power installations, driven by energy-hungry coastal regions in the East such as Jiangsu, Guangdong and Fujian.

Similar to onshore wind, China is set to phase out its 20-year Feed-in-Tariff for offshore wind after 2021, having scrapped them entirely for the year 2020, due to the strain on government funding.

While Capex for offshore wind in China has been halved over the past ten years, the current levelized cost of energy from the technology is still around $98 per kWh – due to the use of more expensive turbines from domestic manufacturers. This is still, however, lower than the global average of $105 per MWh.

With coal still being relatively inexpensive in China, there is a certain element of uncertainty in the medium term for offshore wind in the country. This is currently being compounded by the supply chain disruption through Covid-19 for blades, bearings and cables as well as a distinct shortage of installation vessels.

However, as turbines become larger and more powerful, the cost of offshore wind power will continue to fall and will undercut the cost of fossil-fuel generation. Chinese wind OEM Ming Yang recently unveiled a new 12 MW generator for use in next generation turbines.

China’s wind industry has previously claimed that it will be able to add at 50 GW of capacity annually through to 2025, rising to at least 60 GW by 2030. While this would see nearly 800 GW of capacity installed by the end of the decade, some of this potential business is likely to be lost due to competition from the solar power sector, where costs have fallen more rapidly over recent years.