The local government of Ulanqab City, a district within the northern Chinese province of Inner Mongolia, has tendered a gigawatt-scale wind, solar, and energy storage hybrid project.

Despite its massive scale, of 2.8 GW wind power, 300 MW solar, and 880 MW 2-hour battery storage, the project is referred to not just as a ‘Integrated Source, Grid, Load and Storage’ project, but also as a ‘demonstration’ project. That says something about the scale of renewable development occurring in both China as a whole a couple weeks after a 2.2 GW solar complex was commissioned, and specifically the province of Inner Mongolia.

Ulanqab City’s Development and Reform Commission wants to see the project enter construction by the end of this year; applicant companies may apply for any subsection of the complex, having signed a strategic co-operation agreement with either the municipal or provincial government. In the case of the three larger subsections, the applying company must have already installed 200 MW of renewable energy in the district of Ulanqab City.

The four subsections of the complex are as follows:

Half a decade ago, Xinjiang and the western desert part of China saw much of the country’s solar development due to high solar irradiance. In time this ran into curtailment and transmission grid costs due to remoteness from the eastern heartland of the country, and development shifted to the highly urbanized east.

Now, Inner Mongolia is enjoying the best of both worlds, with good natural resource for solar, very strong winds, all at only a moderate distance from the south-eastern centers of demand. Out of China’s dozens of provinces, it has become a development hotspot for wind, solar, and long-distance transmission lines leading south. 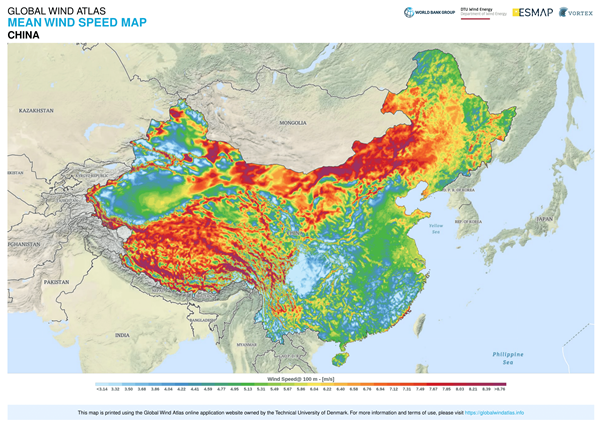 This latest tender is not the only mega-complex announced in Inner Mongolia. In March this year, Jingneng Energy announced that it would begin work by the end of this year on a 5 GW wind, solar, battery storage, and green hydrogen complex, at an investment cost of $3.3 billion, with a hydrogen output of between 400,000 and 500,000 tons annually. This one is located in Etuoke Qianqi in Ordos City, another municipality which like Ulanqab City is located in the southern part of the province.

Last month seemingly the same project entered the news due to an agreement-signing with local government, this time in Ejin Horo Banner (a different subdivision of Ordos City), developed by Guodian Power instead of Jingneng, and with a 1600 km, 8 GW UHVDC transmission line built at a similar expense of $3.3 billion.

Inner Mongolia has been a major area for coal mining, leaving behind coal subsidence areas – cheap land for solar development to snap up. In recent years the province has seen more and more data centers, like the one mentioned in the tender above, many of them engaging in ‘bitcoin mining’ – on such a scale that officials recently attempted to redouble their efforts against their illegal use of subsidized electricity. Ordos in particular has a lot of such data mining going on. Even back in 2017, the province had one of the world’s largest ‘bitcoin mines’.

We can compare Inner Mongolia’s megaprojects to those announced earlier this year in Xinjiang. Those were also hybrids with green hydrogen, but the difference was they had more CSP, including thermal energy storage, and less battery energy storage – Inner Mongolia lacks the cloudless desert skies which CSP relies on, and high winds are a nuisance for heliostats. In June, Panda Green Energy announced it would develop a gigawatt-scale demonstration project in Xinjiang, including PV solar, thermal solar, energy storage, and hydrogen electrolysis, starting at 500 MW and being scaled up to 1 GW. Before that, Baofeng Energy announced a 200 MW solar, 20,000 cubic meters per hour hydrogen project in Ningxia Hui, a less remote northwestern desert province.