China’s National Energy Administration has released stunning figures for the year’s power plant development – 191 GW was added to the grid, including 12.2 GW hydropower, 48.2 GW solar, and 71.7 GW wind. While the solar figure surpasses the highest expectations by 3 GW, the wind figure is so unbelievable, at between two and three times what we expected, that it may not be taken seriously without some sort of independent confirmation.

We knew that Coronavirus had delayed projects later through the year and that the end of end of the Feed-in Tariff for Onshore Wind (and utility-scale solar) would cause a huge December spike in installations, but not to this extent – with something like 20 GW solar and 47 GW wind in the last month. Vietnam’s December demonstrated how solar installations can spike ahead of deadlines, but wind installations take longer and are harder to pull forward.

For solar, this year’s figure is impressive but still doesn’t beat the 2017 record. In contrast, the sudden jump in wind installations is, in terms of the cost to build the projects, roughly equivalent to the UK’s annual military budget. Even with the clear acceleration seen in the past few years in the graph below, explanation is required.

One was offered by Feng Zhao, the Global Wind Energy Council’s Strategy Director; he pointed out that these figures reflect grid-connected installations, and that according to the Chinese Wind Energy Association (CWEA), grid connection delays totaled a massive 26.3 GW in 2019. Zhao also referred to a regulation issued in November by the Ministry of Finance which granted a buffer for projects to be registered under the 2020 FiT, subject to further verification in 2021. 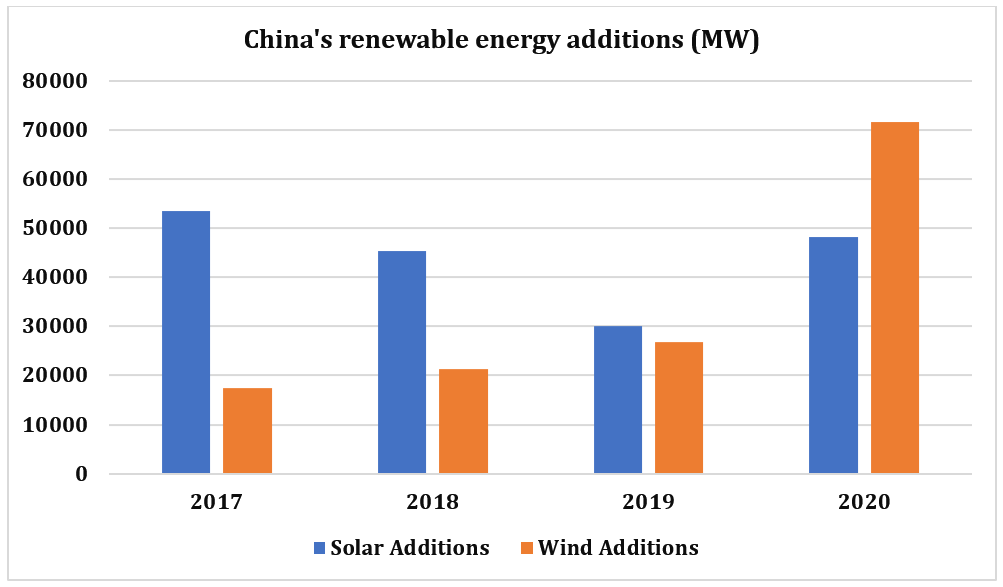 If you were to reassign 26.3 GW from the 2020 figure to 2019, reflecting when they’d been built rather than when they’d been grid-connected (as well as reassigning many GW from 2019 to 2018 and so on), the exponential increase of wind installations would look a lot smoother. Having said that, this 2020 figure will still stand as the record year for wind power for several years to come, due to the spike caused by pushing those with a FiT termination into 2020, when actually they are not yet complete. Solar, on the other hand, is set by all accounts to grow right through the end of the FiT. We expect solar to average 70 GW and wind 50 GW over the coming decade, bringing China to about 1700 GW in total in 2030. The 1,200 GW Xi Jinping voiced at the UN is only a guaranteed minimum.

Even if 2020’s surprising figures are adjusted or are given a different slant in the coming months, they set an appropriately strong baseline for the next five years – to be covered by China’s 14th Five-Year Plan, which is to be released in March and will have the expansion of renewable energy as one of its central policies.

The solar industry of China better hope that there’s a massive uptick in demand, considering that during 2020, it’s constructed a little over 300 GW each of new wafer, cell, and module manufacturing, as well as increasing polysilicon production by 269,000. Already we’re seeing price pressures push the market towards consolidation. It’s expected that the new 182mm and 210mm size modules, 500+ W each, will have a 125 GW presence on the market this year just coming from the top three companies of each ‘size faction’ alone.

The world of renewables this week
Wind accelerates past nuclear, hydro in post Covid power markets