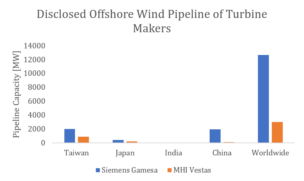 Fears that the coronavirus will massively disrupt the wind power market are all but gone, with Siemens Gamesa and MHI Vestas both resuming operation in their Chinese facilities as of last weekend. But turbine-makers appear shaken and clearly wish to reduce their dependency on a Chinese supply chain, as capacity demands ramp up in the Asia Pacific region. India looks the best bet for Siemens to expand its footprint, whereas emerging markets like Taiwan and Japan may be where Vestas chooses to place its focus.

With the outbreak of the Coronavirus, several key transport routes had been shut in China. With several restrictions imposed on workforce travel, Siemens Gamesa was forced to pause operations at both of its Chinese facilities in Lingang and Tianjin, with Vestas and Orsted facing similar levels of disruption. While major issues have been resolved in a matter of weeks for the turbine makers, Siemens Gamesa CEO Markus Tacke noted that his company was “not yet ready to estimate the impact” of a “long-term slowdown of international logistics.” With this uncertainty, his company recently added that it has “started to develop India as a global hub to reduce our dependency on China.”

The company currently has 5 production facilities in the Asia-Pacific region, two in China and three in India, which makes the move seem less of a reduced dependency on China, and more an increased dependency on India. But this move may be more tactical than simply out of fear of the coronavirus – with India looking like a promising hub for the turbine-maker for the rest of the Asia Pacific region.

Siemens Gamesa is currently the market leader for wind power in India, with a current supply chain equipped to provide around 10 GW per year. The company added 2.4 GW of onshore capacity to the country last year, leaving it with a market share of 30%, greater than domestic player Suzlon (19%), which is currently struggling through a restructuring plan to work its way out of debt – it wouldn’t be surprising to see Suzlon follow Senvion’s route to insolvency if things go on as they are.

This provides an opportunity for Siemen’s to continue its momentum of ‘swooping in’ to India – an opportunity which it won’t have in China, where domestic manufacturers like Goldwind and Shanghai Electric will continue to be looked upon favorably by state-run developers. In fact, the Chinese marketplace will only become more crowded, with manufacturers like Envision retracting from the Indian market to focus more on building a presence on its home-turf.

India has set ambitious targets for onshore wind of 60 GW by 2022. While it will almost certainly fall short of this, the country benefits from similarly low material and labor costs to China and has experienced some of the lowest costs for wind power globally, making it an ideal place for turbine-makers to export from. The country has also stated a further ambitious target for offshore wind, although 5 GW by 2022, and 30 GW by 2030 cannot be considered reasonable for a country with no installed capacity as yet.

But this ambition means that a new manufacturing plant could well be dedicated to offshore wind turbines – an area Siemens has targeted for its wind efforts. In 2018 the company had a 41% global market share in the offshore sector, compared to just 7.5% for onshore. An offshore production facility in India would therefore place Siemens in a good position to capture much of the 30 GW of offshore wind capacity Rethink Energy predicts the country will see by 2040.

As we said last week in reference to the US, the early days of emerging markets are likely to be dominated by players who set-up-shop first. While in the US, Siemens could face some competition from General Electric, India seems like a fairly easy and logical step for the company to make in its offshore sector.

MHI Vestas will also be looking to expand its footprint for offshore wind in Asia, but will probably steer clear of India if Siemens makes the move first, as higher margins and lower level of competition will be available elsewhere. Being half owned by Mitsubishi Heavy Industries, the company would have a vested interest in setting up in Japan, where it could be better placed to supply emerging markets in Taiwan and South Korea. MHI could conceivably instead target a base in Taiwan.

In a press release on Monday, the company announced that it is “readying for noteworthy industrial announcements,” after being selected as the preferred supplier for the 300 MW Zhong Neng project in Taiwan, now that CIP’s bid for the project has been finally approved.

Taiwan has set some local content demands, initially ten elements must be made locally, but from 2023 onwards this rises to 23, before further increasing to 28 the following year. Some installations will make use of ‘off-the-rack’ components in these early projects, including towers and monopiles – but as time goes by domestic components will start to make their way up the turbine structure to the nacelle.

This ‘big news’ then could be that Vestas is set to open a turbine production facility in Taiwan, where we have forecast 8 GW of offshore wind by 2030, and 21 GW by 2040. However, Siemens currently dominates the pipeline market here as well, with 2 GW of unconditional orders for turbines, compared to Vestas’ 900 MW, and has already launched a nacelle assembly facility in the country. This lead is however smaller than it is in India, and something that Vestas will be keen to change if a move is on the cards.

This also comes at a time when both Siemens and Vestas are becoming increasingly cost competitive in the Asian market, having won in several Chinese tenders against local rivals early this year. According to BNEF the share of turbines installed offshore has grown to 12% this year, which is partially responsible for Vestas experiencing the largest slip in total market share (onshore and offshore), down to 18%, but still in first place. The four largest turbine makers continued to dominate the market, with a combine share of 55%, including shares from Siemens Gamesa, Goldwind and GE.

Through expansion, Goldwind will most likely focus on its domestic market in China, the world’s largest, with General Electric unlikely to resist temptations of moving home to the US, where offshore wind promises are rising by the day.

The world of renewables this week
EDF obsesses over nuclear, as shares suffer