The ‘CrossWind’ partnership of Shell and Eneco has been victorious in the latest subsidy free offshore wind auction in the Netherlands, nailing down the 759 MW Hollandse Kust North project in the North Sea. While this is far from the largest offshore wind project in the pipeline, several of the technologies that it will test could have significant implications for Europe’s energy transition. 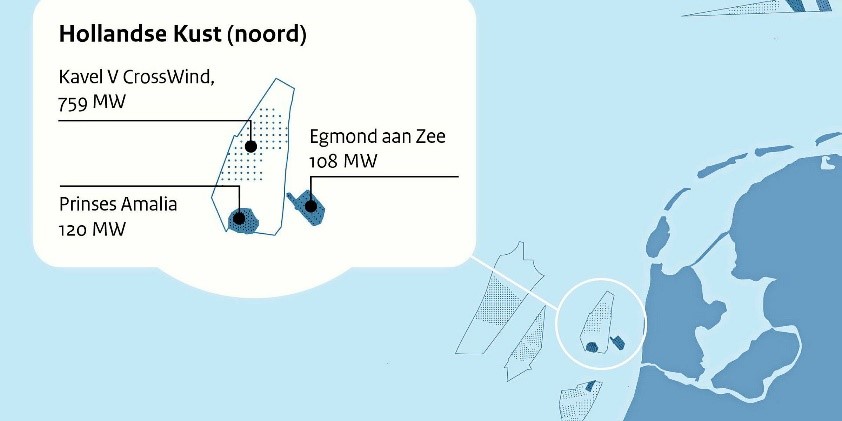 In announcing the winning bidder, the Dutch Ministry of Economic Affairs and Climate Policy (EKZ) highlighted the consortium’s intention to “test a variety of innovations in the field of energy storage and flexibility.” Shell has claimed that five different technologies will be demonstrated at the project, with the potential to be implemented at larger scale if successful, including those in performance optimization, floating solar, collocated short-term battery storage, and green hydrogen production – most of which will remain in operation even when the wind isn’t blowing.

The project will use 11 MW turbines from Siemens Gamesa and is likely to come online in 2023. These SG 11.0-193 turbines, with 94-meter blades include a digital control system which is designed to constantly observe performance. Launched at WindEurope’s Offshore Wind conference last November, these came alongside Siemens’ new ‘Wake Adapt’ feature, which will aim to reduce the lost capacity through the wake and blockage effects on wind farm performance.

The wake effect essentially details the loss of power from turbines, due to the turbulence in the air caused by any upstream turbines, while the blockage effect focuses on the wind, upstream of the wind farm, being forced to slowdown as a result of wind slowing down in the windfarm – basically a traffic jam for wind flow.

These effects are not trivial. In October last year, Orsted was forced to downgrade all of its long-term financial targets based on research from DNV GL that these factors had led to the unlevered lifecycle IRR, capacity-weighted average for 7 projects to fall by 0.5%, and the lifetime load factor to sit at the bottom end of the 48% to 50% range previously specified.

Siemens’ solution claims that by yawing turbines, when wind speeds are above rated, the wake-induced production losses can be reduced by 10%, increasing the total annual energy yield of wind farms by up to 1% – which in a gigawatt scale plant, is significant.

The other technologies are better known across the energy sector: floating solar which Rethink Energy has forecast will grow from a global capacity of 1.1 GW in 2019 to 61.6 GW by 2030; and battery storage, which will rise from 6.9 GW to 366 GW in the same timeframe.

But the concept creating the largest buzz at the moment is that of green hydrogen: The EU released its a hydrogen strategy several weeks ago which places the technology at the center of its route to net-zero emissions and BloombergNEF has identified that nearly 20% of the economic stimulus that is directed to clean energy being earmarked for green hydrogen.

This also adds to Shell’s plans to develop a green hydrogen cluster on the Dutch coast, with the purpose of providing a clean feedstock to the neighboring petrochemical and refining sectors and starting with the NortH2 plant in Rotterdam. This project alone hopes to develop electrolyzer capacity that will demand up to 10 GW of offshore wind by 2040 which is solely dedicated to green hydrogen capacity – maybe Hollandse Kust North will be among the first contributors.

For this, it’s possible that Shell will have to peel itself away from Eneco, to acquire the full share of the project. This would have been achieved already if Shell had been successful in its acquisition bid for Eneco, which it narrowly lost out on to Mitsubishi.

The inclusion of green hydrogen will also be key to the profitability of the project without the inclusion of government subsidies, limiting the risk of lost revenues as rates of curtailment increase alongside offshore wind penetration in the Netherlands.

Orsted, which has a similar plan for offshore wind in the North Sea, was the only other bidder for the Hollandse Kust North project. The tender is the fifth in a series of solicitations which aims to bring the Netherland’s capacity of offshore wind to 11 GW by 2030.

If you also include the 400 MW of nearshore wind in the Netherlands, then the country is pretty much in line with its target of reaching 4.5 GW offshore wind capacity by the end of 2023, before it attempts to ramp up installations to reach 10.6 GW by 2030, following a roadmap announced last year. This will likely be reached through steady annual additions of between 700 MW and 1,000 MW between 2024 and 2030, following dedicated tenders for areas including Hollandse Kust West (1,400 MW), Ten noorden van de Waddeneilanden (700 MW), and IJmuiden (4,000 MW), through various stages of capacity. 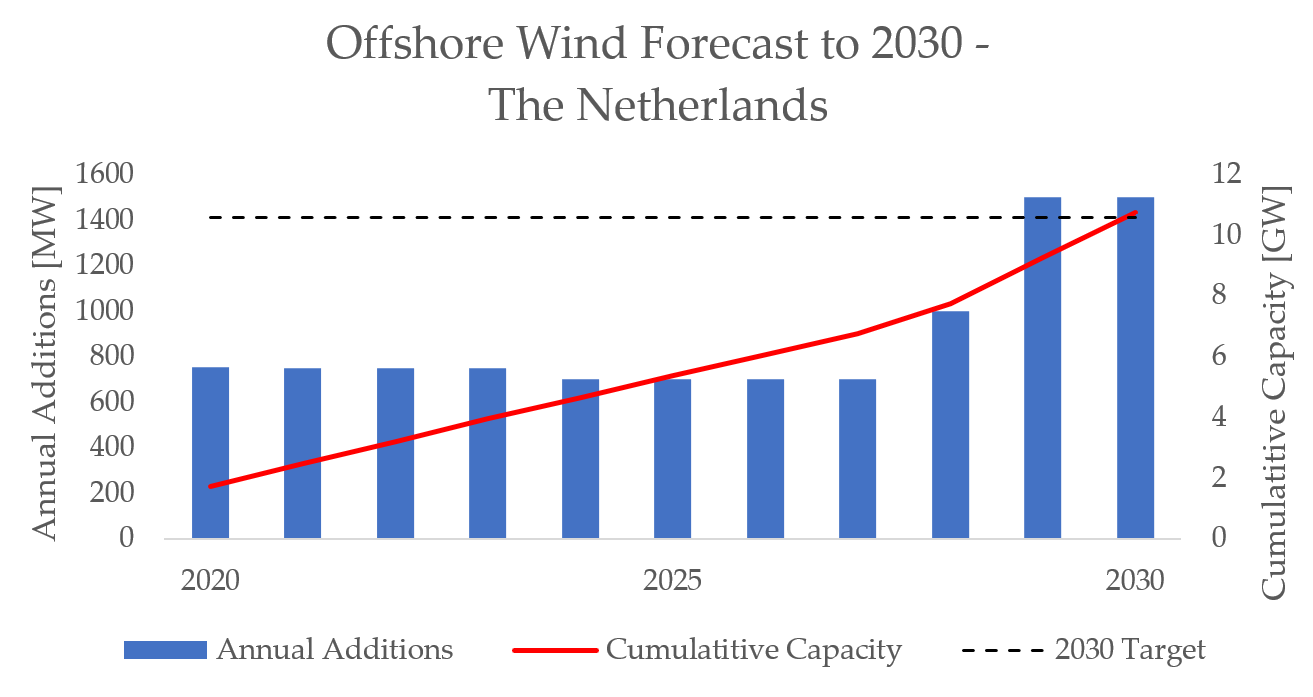