A Danish consortium is ready to finance an artificial island energy hub in the North Sea called Vindo (written as VindØ), with $59 million available initially. Vindo will act as the nexus for 10 GW of far offshore wind power, and will be built using submersible concrete boxes 100 kilometers out to sea. The project has Danish government support, but might not need its funding. The intention from the consortium is to have the island running by 2030.

On May 20 this year, Denmark went further on the previously-mooted idea of an energy island – proposing a second one of 2 GW for the Baltic Sea, in addition to the 2 GW – 10 GW project in the North Sea. Orsted has also proposed a 5 GW hub on the Baltic island of Bornholm, which would link Poland, Sweden, Germany, and Denmark. Last year, Denmark commissioned a study into locations for such islands.

The consortium consists of PensionDanmark, PFA Pension, and SEAS-NVE, and has $59 million ready to begin with. EnergiNet, the Danish state power utility, will be involved and will purchase part of the island, while Copenhagen Infrastructure Partners, which has a global presence in offshore wind, has an auxiliary role. According to the consortium, all the necessary technology for such a hub already exists within Denmark’s expertise.

Peter Larsen, workstream lead for Markets and Regulation in the North Sea Wind Power Hub organisation, asserts that it should not be viewed as a strictly Danish project, since the ultimate vision for such North Sea hubs is international, involving Norway, Denmark, Germany, the Netherlands, and the UK, as well as perhaps France and Belgium.

The purpose of an offshore wind energy island is to hold converter stations which enable electricity to be sent ashore as high-voltage direct current, which suffers lower transmission losses compared to the lower-voltage AC produced directly from an offshore wind farm. While cable costs are higher over longer distances, this can be countered by combining multiple projects into one transmission link. The motive to move further out from the coastal areas comes from nearer-shore sites being already occupied by planned projects and shipping.

At present it is mainly the southern region of the North Sea being considered, further from shore than current planned projects. Further north, the water is deeper than 55 meters, which means the advent of floating offshore wind will be needed for that region to be developed. The relatively shallow Dogger Bank, lying more in the center of the Sea, is another location mooted for an energy hub island.

There are also economies of scale to be found in transmission infrastructure on such a large scale. The grid connection of a single wind farm will typically only be used to 50% of its capacity factor, whereas a cable handling many power sources, such as the BritNed connector, experiences 70-80% utilization. Only at most 7% of CAPEX costs of the envisaged wind farms and transmission infrastructure will be owed to the islands themselves. 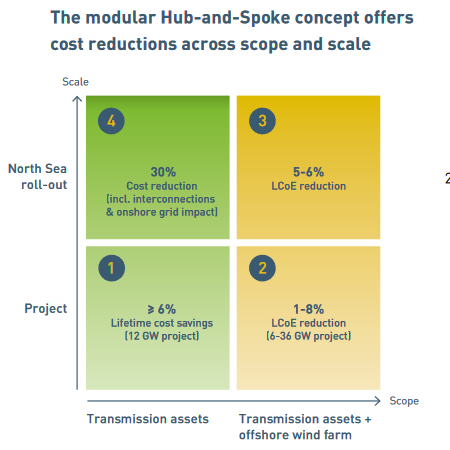 The North Sea Wind Power Hub, a consortium which is setting out plans for many more such energy hubs in the North Sea, started out in 2017, and by 2019 included TenneT Netherlands, Tennet Germany, EnergiNet, Gasunie, and the Port of Rotterdam as partners.

Gasunie is a Dutch and north-German natural gas infrastructure player, which has recently taking a keen interest in green hydrogen production. TenneT is the Dutch electricity grid operator, and also handles a swathe of western Germany. The Port of Rotterdam is central to current offshore wind developments, and will continue on that track. Until overtaken by Singapore in 2004, it was the world’s busiest port for four decades.

North Sea Wind Power Hub (NSWPH) program contracted Intertek for a UK permitting and planning study in September 2019. As with Vindo, island capacities are envisaged in the 10-15 GW range. While the first such project is seen as feasible as things stand, an eventual expansion across the North Sea could see as much as 180 GW routed through such Hubs by 2045. To that end, the NSWPH wants to see extensive changes in regulatory frameworks, markets, and much else besides.

The projects will also consider power-to-gas technology – producing hydrogen on-site and transmitting it ashore by pipeline. This would be a subsequent development for the projects, with the first development around just exporting electricity to shore.

The NSWPH views the current regulatory framework as insufficient for two reasons – it’s too short-term and looks ‘only’ 10 years ahead, and is ill-suited to a hub-and-spoke projects with many subprojects going through one transmission hub. There will also need to be transnational agreements on many things, including technical questions such as DC voltage levels.

Across the North Sea, only the UK is currently preparing for leasing seabed for projects to be developed in the early 2030s. To be complete in the early 2030s, formal project decisions are needed in the early 2020s, and this will most likely need more renewable energy targets, both for post-2030 dates and pertaining specifically to offshore wind.

With recent advances in HVDC cabling, especially regarding insulation for submarine cabling, transmission losses will be low enough – perhaps 5% each way – that it could theoretically be worth sending excess wind generation to pumped hydro storage in Norway’s hydroelectric dams. Norway has half of Europe’s hydro dams, which could become the ‘battery of Europe’. However, the main methods to gain dispatchable power from wind generation will be battery storage and especially hydrogen.