Massive projects in China’s desert will see it smash past its renewable energy targets and enhance its global leadership in clean energy. This week, the country kickstarted a second round of projects, just months after President Xi Jinping announced an initial 100 GW wind and solar initiative for China’s arid land. The second batch is likely to be even larger.

Initially reported by China Wind Power News, the National Energy Administration issued the “Notice on Organizing the Second Batch of National Large-scale Wind Power Photovoltaic Base Projects Focusing on Deserts, Gobi and Desert Areas.” It will ask provinces to submit a list of projects by December 15, all of which must be larger than 1 GW in capacity.

Construction of each project must be started next year and finished by 2023. Connection to the grid for projects that are restricted by ‘external conditions,’ however, may be able to delay grid connection to 2024.

The most notable thing about the scheme – especially given that the country is already reportedly ‘smoothly’ installing the first 100 GW phase – is its timeframe. Europe’s largest onshore wind farm, the 1,057 MW Fosen project in Norway, took five years to build. China’s plan could see nearly one hundred projects of this size built in just half the time, with more initiatives certain to be added for subsequent years.

China’s authoritarian state naturally lends itself to less bureaucratic procedures and less red tape through the development of such infrastructure projects. The National Development and Reform Commission and the National Energy Administration are working together to coordinate policy support for land, environmental protection, finance, and grid connection.

The scheme also outlines several measures to accelerate development. Projects are meant to be built near existing transmission infrastructure, ideally near existing coal and gas power plants and centralized energy storage, to limit the amount of power that has to be curtailed or new lines that have to be built. To avoid the fragmentation of projects, no more than two consortium units will be permitted to form a consortium to develop a single project.

The notice also states that projects with a utilization rate of less than 95% after grid connection will need to justify why this is the case. Advanced technologies will also be encouraged, with the use of bifacial modules for solar power where possible. Other conditions that the projects will have to satisfy the aim to ensure that ecological ‘red lines’ are not crossed.

The initiative falls within the remit of China’s 14th Five-Year plan, which outlined a focus on the construction of projects in deserts, Gobi (an area which straddles China and Mongolia), and other desert areas. Alongside the first 100 GW, which has already been confirmed, rumors have been circulated for an all-encompassing 400 GW initiative in desert regions, with half of its capacity set to come online before 2025. Most capacity is likely to be developed in Western China, where existing (and planned) fossil fuel infrastructure is well linked to demand centers in the east.

In the first three quarters of 2021, China has installed a 15.7 GW of wind power capacity (nearly 20% offshore), along with 17.3 GW of solar – up 14% and down 6% respectively from 2020 figures. The bulk of annual installations will be announced in Q4; nearly 96 GW was completed across both technologies ahead of subsidy deadlines in the last three months of 2020. As such, generation from wind power is actually up 28.4% compared to this time last year, while solar generation is up 10.2%.

China’s three-year action plan to reduce curtailment through using ultra-high voltage transmission lines also appears to be working. By the end of 2020, 14 high voltage AC lines and 16 high voltage DC line have been completed across the country. As such, wind curtailment has fallen 0.3% to 3.6% over the past year. Rates in wind centers in Xinjiang have fallen to 8%, while they have fallen to 4% in Gansu, and 2% in Hunan.

While record wind power installations of 72 GW in 2020 are unlikely to be surpassed in 2021, Rethink Energy anticipates that Q4 will see 17 GW of wind capacity installed. This will include a rush of 3 GW of offshore wind ahead of subsidy deadlines at the end of the year.

We have previous stated that we expect to see annual additions rise from 33 GW this year up to 67 GW by 2030, but these mammoth desert projects could see our forecasts blown out of the water. The country was already on track to surpass its 1,200 GW clean energy target for 2030 in early 2026.

It’s possible that the desert projects could add an additional 50% opportunity for China’s wind sector over the next decade. This would not only see the 2030 target for renewables reached five years ahead of schedule, but would see nearly 2,200 GW of wind and solar installed across the country by the end of the decade – 1,360 GW solar, and 810 GW wind.

Using our projected electricity demand for China in our Look Back in Anger forecast, and assuming that China continues to make solid progress in reducing curtailment across its renewables sector, wind and solar would account for 31% of electricity in the country by 2030. Including hydropower and nuclear, more than 55% of China’s power supply would be from clean sources. 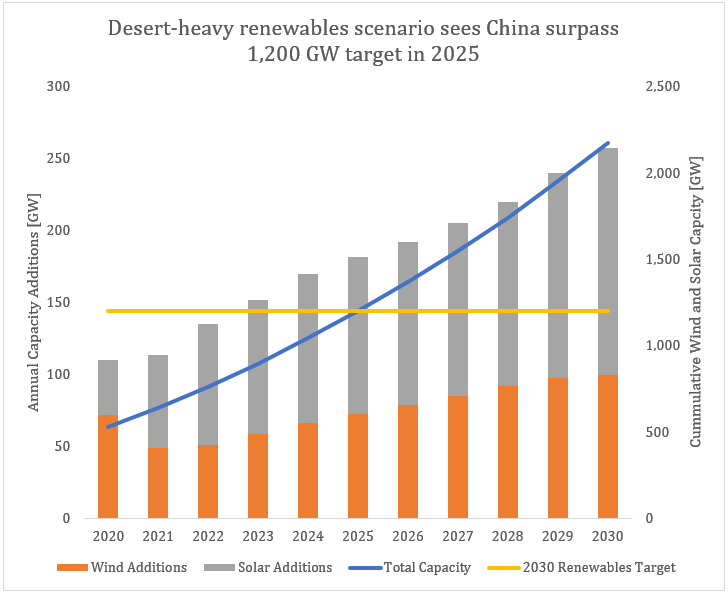 The world of renewables this week
How can we be sure the world goes 100% EV, with no holdouts