We’ve been aware for some time of an aggressive sentiment towards Energy Vault Holdings, which came to the public markets via a SPAC with Novus Capital Corporation II, and which is starting to build its pipeline of business around the idea of placing multi-ton concrete blocks on top of one another as a form of energy storage.

This week we had a communication from Dalrymple Finance, what appears to be a one man band, which engages in short selling, pointing out defects in the story so far.

We were all impressed when we first came across Energy Vault when it announced a cash injection of  $110 million by Softbank’s Vision fund in 2019, why had we never thought of it before, lifting weights using a crane and placing them on top of one another, in a vaguely skyscraper formation, and then remove them one by one using a turbine in the crane’s lifting gear to turn the potential energy back into electricity and hey presto energy storage wherever you want it.

Surely Softbank had done its due diligence – hey they could have hired us – and the idea was surely sound. Or not, as Keith Dalrymple would have us believe. And he may well have a point.

There are obvious questions you would ask in due diligence, like could a wind blowing mean that you cannot drop the weight precisely enough to have a stable tower. Or if they are made of concrete, then how much CO2 budget did that use, and when had the use as energy storage paid back that budget?

But since Energy Vault’s introduction, early potential clients have pointed out that they should not use plain old concrete, but incorporate coal ash into the concrete’s manufacture – that way the cost is even lower, people will pay you to take coal ash away. The problem then with coal ash made blocks is that they often have toxic rare metals hidden in them, so safety becomes an issue. Or cost if you have to purify it.

The original tower was supposed to look like the image above, but today it looks more like the picture below. 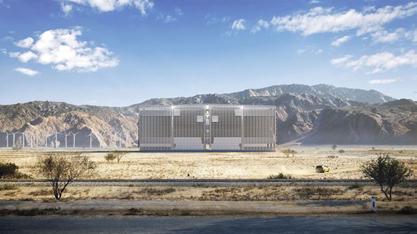 This is an enclosed design that seems to keep out the wind, and does not just lift weights, but slides them on wheels one behind the other, in a line but uses far less height and lots more concrete blocks.

As one video from 2019 went on to say, “Please don’t do this, this is a silly idea,” and added that it had entirely “busted” the idea of gravity with physical objects, as water was far easier to manage and over greater heights, and instead we should all be investing in pumped hydro.

But this video is not right either. Pumped hydro has been with us for a while with little in the way of investment outside of China, a complete lack of predictability of when permitting would take place makes it tough to invest in, and with old hydro showing an unpromising track record of killing fishing stocks, birds and forcing millions of people to move homes, few are giving pumped hydro any chance to breathe in the current transition economics, though that could, and perhaps should, change.

But simplistic calculations show that boasts of multi MW of energy storage per installation is a function of how much weight, lifted how far, and under what conditions – and the only trial built so far to verify what has become a market capitalization of over well over $1 billion for Energy Vault, has barely stored enough energy to boil a kettle a couple of times. Now we are NOT going to say that the latest design, which looks more like an Amazon warehouse, which drops 35 ton blocks a few floors won’t work, it might, but it was certainly not the design that was advertised when the company got its first funding and then subsequent rounds of funding, so at the very least it is design after the fact, and not entirely fair on investors. There are accusations that those who set up the SPAC enjoyed considerable leverage too.

It is a US idea that came out of the Idealab incubator and it built its demonstrator project in Switzerland. A full stack is supposed to be able to deliver energy at a rate of 4 MWp and hold 35 MWh of energy, at a capex price of $200 per KWh, which is now below that of lithium ion batteries, but wasn’t back in 2019.

We have reported in the past that Tata Power ordered the first Energy Vault, but has it been built? We don’t think so.

Dalrymple points to other issues, with how the money was raised in the SPAC, how software purchases seem to be disguised as investments, and how its order book appears inflated when you look into the amount of economic activity the ordering parties have in their history.

Let’s be clear here, gravity is a powerful force, and we can cite a UK firm Gravitricity which is still in the pre-investment phase, and living on grants and R&D handouts, still trying to solve issues of lifting and lowering weights inside enclosed shafts, such as old coal mines – which are far deeper than anything Energy Vault has. There is nothing inherently dumb in trying to use gravity, but caveat emptor (let the buyer beware) of anything dressed up as anything more than a pilot or trial, which has had no discernible due diligence.

Rethink Energy’s own articles are quoted by Dalrymple Finance, where we have queried its relationship with DG Fuels, an artificial fuel maker that says it has GE tied up as a client for testing its aircraft engines with SAF. Energy Vault claims to have DG Fuels as a client with orders of over $500 million in energy storage.

DG Fuels is led by a bunch of ex-military leaders with energy connections and they hope to get their hands on $2.15 billion of loan guarantees from the Department of Energy. Without that, this deal looks like a non-starter, and it looked to us like Energy Vault just needed something to announce to stay in the public eye, even if it leads to nothing happening.

Dalrymple says that all the deals are of this indeterminate nature and that the probability of the company achieving projected revenue in 2025 of $2.8 billion using a system that has yet to be built approaches zero.

While we have some sympathy with that position, our position is somewhat different. If nothing has happened except a 2nd and 3rd design has been reached, and that itself has also yet to be trialed, then how can it have the momentum to make a difference in long term energy storage?

We have said time and time again that lithium ion has major issues, with thermal runaway. There are three, possibly four, ways of eliminating this.

Three ways involve a different cathode or electrolyte of a similar lithium ion technology – either LFP or Solid state or a design that automatically cools all cells when they are in use. LFP does not have sufficient payload as yet, solid state will not emerge until 2024 at the earliest at scale, and non-standard designs at present just add cost. A fourth way might mean continuing to use lithium ion for cars, but alternative chemistry designs for grid batteries which can take up more space and have lower energy density without all the other issues.

For the most part long term duration batteries will not be required at scale until 2030 on most grids, so there’s plenty of time to get this right. Or is there? Whichever technology wins out in long term duration, it needs to be cheaper than lithium ion and so needs to have a giga factory making it successfully before the end of 2024, as that’s when solid state takes over and thermal runaway disappears as a major stumbling block. It is also the timeframe when the scaling up of supply chains for lithium ion designs will catch up, particular in the US, where there is a major shortage of lithium ion batteries, from now until 2027.

Energy Vault is not showing the type of commercial agility and ramp up that is required to take advantage of these timescales, so it will fail. Clear as day. But failing in building a cheaper technology than lithium ion at a critical junction in battery development is one thing, but it does not mean that it cannot installed in 3 or 4 very successful projects, that make a bit of money by then. It just won’t have the momentum to take off like a rocket. So while we are happy to alert people to the Dalrymple viewpoint, we are not entirely embracing its position that there has been clear profiteering, and a history of hollow deals, but then again it’s a short seller, and we are not.

If you want a copy of the Dalrymple pdf email [email protected] directly.

Prime Minister candidates – not what they say now, but next
CSP expands auxiliary role in China, 20 GWh to be built by 2024