EU throws €3bn at lithium, to move goalposts in EVs and Grid 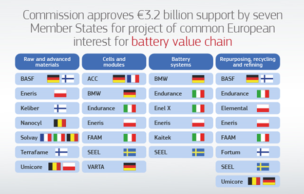 The EU has come out with a €3 billion plus commitment to fund the development of Lithium Ion batteries, coming late to the party to initiate pure R&D funding. It says this will stimulate a further €5 billion of public funds to equate to an €8 billion increase in European funding for Lithium Ion batteries – not for production, but purely for development breakthroughs.

Those players who will get funding are a combination of car makers, materials specialists, battery designers and educational institutes, headlined by names like BMW, chemicals giant BASF, Enel X, the energy storage arm of Enel, Nanocyl a maker of carbon nanotubes for containing Lithium Ion, Germany’s Varta and Spain’s Endurance from the battery manufacturers of Europe.

At first glance it seems like a tame effort that is way too late, but better late than never. All of the companies involved have failed to get themselves into the Lithium Ion business, although some, such as Varta have begun the process. Collectively this group of companies probably have the wherewithal to get the basic R&D done to create safe, high density Lithium batteries which are cheaper to produce and more effective than those on the market already. But then what? Will they be able to manufacture them in volume at a competitive price versus China? That remains to be seen.

The technology that emerges will have been funded using the Important Project of Common European interest (“IPCEI”) rules which makes it clear that production and manufacturing cannot be funded, only pure research, and that must then be shared (or licensed) with other industrial players across Europe.

The funding will come collectively from Belgium, Finland, France, Germany, Italy, Poland and Sweden, supporting research and innovation and while the completion of the project is not expected prior to 2031, some outcomes will happen way before that as it is organized into sub-projects.

This table below gives an idea of what they are up against. It is our forecast for the amount of Lithium Ion battery production capacity in Europe, either already funded, mostly from companies outside the EU, or expected to be added, due to capacity requirements.

You would have to add to this the capacity expected from Tesla, once car and battery capability is brought online in its chosen Berlin European plant, recently announced. Clearly in most cases (except Northvolt which was formed in Sweden in 2017) these are manufacturing plants from companies which have similar plants already in Asia or the US, so they are making current designs, in huge volumes already – so are expert at production.

The likely jobs for all these plants would be in the region of 600,000, and yet it is mostly jobs that the European Commission highlighted as it announced this funding. Well the jobs are coming here anyway, due to the huge German concentration of car makers.

Margrethe Vestager, one of the EU commissioners and EVP “Europe fit for the Digital Age,” said, “Battery production in Europe is of strategic interest for our economy and society because of its potential in terms of clean mobility and energy, job creation, sustainability and competitiveness. Our Important Projects of Common European Interest smooth the way for public authorities and industries from several Member States to come together and design ambitious innovation projects with positive spill-over effects across industrial sectors and regions. The approved aid will ensure that this important project can go ahead without unduly distorting competition.”

This may be Europe’s first major pan-European battery ecosystem, but there are clearly going to be other groupings as the EV revolution happens, and beyond that, as Lithium Ion batteries emerge as candidates for large grid scale energy storage projects across Europe. One source last week told us that there are already 10,000 applications for this type of storage in the UK alone, so it has the potential to take off ahead of EVs.

What is most worrying is the way these particular European companies have not felt capable of funding their own efforts into Lithium Ion so far, but instead seem entirely reliant on the EU to get things kick-started? There is a worry that this is just another way for the EU to give away €3.2 billion to large established local European companies which enjoy EU tariff protections. The EU let a solar lead fall by the wayside as it engaged in protectionism, rather than R&D investment over the past decade.

The project will involve 17 direct participants, listed in the diagram below, mostly industrial actors, including small and medium-sized enterprises, some of which with activities in more than one member state. The direct participants will closely cooperate with each other and with over 70 external partners, such as public research organizations.

The deal has been struck following intensive technical discussions between the Commission and the relevant actors over just 3 months, the project was formally notified to the Commission for approval under EU State aid rules in October.

At the end of 2017 the European Commission launched the “European Battery Alliance” with interested Member States and industrials and adopted a strategic action plan for batteries by May 2018. This seems to be the outcome from that plan – to go cap in hand to the EU for an astonishing amount of money.

The idea is to develop new technologies for lithium-ion batteries (both liquid electrolyte and solid state) which last longer, have shorter charging times, are safer, are more environmentally friendly and which deliver across the battery value chain, from mining and processing the raw materials, production of advanced chemicals, design of battery cells and modules and their integration into smart systems, right up to the recycling and repurposing of used batteries.

At present almost all Lithium Ion battery recycling is carried out in China, which has a huge market lead in this.

The plan is to reduce the CO2 footprint in manufacture, and eliminate waste across different production processes.

The four key areas of this research are raw and advanced materials; cells and modules; battery systems including battery management software and repurposing, recycling and refining, which we assume means moving partly expired batteries from EVs, to grid to recycling, seamlessly.

There may well be a reaction from both the US and China over any technologies coming out of this initiative, for instance import tariffs into those regions due to these companies receiving government support – but let’s get to that stage first. Most of these countries have similar or equivalent R&D funding processes anyway.

Belgium will put in €80 million; Finland €30 million; France €960 million; Germany the most at €1.25 billion; Italy €570 million; Poland €240 million and Sweden just €50 million. And all monies could be potentially repaid, but only if the technology can be licensed successfully and make significant profits.

The technology apparently owes something to researchers at Nokia Bell Labs and Amber, the SFI Centre for Advanced Materials and BioEngineering Research at Trinity College Dublin. Back in June the two jointly announced a new formula for Lithium Ion battery composition which packed 2.5 times the battery density into a battery compared to current market leaders, and which were initially developed to usher in 5G mobile batteries. This related to the use of composite electrodes with high conductivity and low charge-transfer resistance, for fast charging and capacities up at the theoretical limits.