Russia will not play a part in Europe’s energy sector from 2027 onwards, according to sweeping plans unveiled on Wednesday by the European Commission.

The €210 billion REPowerEU plan hopes to attack the triple threat of Russian imports, soaring energy prices, and greenhouse gas emissions across the bloc. Centered around an acceleration of new locally sourced renewable energy resources, the Commission will now aim for renewables to make up 45% of Europe’s energy mix by 2030 – up from a previous target of 40%. It will also ramp up its target for energy consumption, aiming to reduce it by 13% by the end of the decade, up from 9%.

These moves aim to squeeze Russian energy out of European supplies. Currently, the country – which has overseen an “unprovoked and unjustified military aggression against Ukraine” – provides 40% of Europe’s gas and 27% of its imported oil.

Even while overall imports of Russian fossil fuels to Europe have fallen since the start of the invasion, the country has nearly doubled its revenues from European sales, benefiting from the soaring prices caused by the energy crisis it has caused. The EU’s plan highlights how high amounts paid for Russia’s fossil fuels are helping sustain its war against Ukraine.

There has been reluctance across some member states in directly sanctioning the energy supplies that they rely upon so heavily. However, Russia’s weaponization of its supplies – cutting off gas to Bulgaria, Poland, and Finland in recent weeks – has demonstrated the urgency to address the lack of reliability of Russian energy supplies. As such, coal and oil imports are now to be covered by the sanctions regime; 85% of people polled agreed that the EU should reduce its dependency on Russian gas and oil as soon as possible.

The EU’s new strategy is three pronged, and propped up by what it calls ‘Smart Investment.’ It aims to build on the Fit for 55 package which was created to reduce greenhouse gas emissions across the bloc by 55% by 2030 and for net zero emissions to be reached by 2050. These prongs include a mix of EU laws, non-binding schemes, and recommendations national governments could take up.

The first prong – energy savings – will require structural change with mid- to long-term energy efficiency measures, through channels such as the Energy Performance of Buildings Directive. It also calls for immediate savings through behavioral changes, with a nine-point plan to encourage consumers across the bloc to use less energy. These immediate savings could reduce both oil and gas demand by around 5%.

As we’ve been calling for months, the EU will encourage member states to make “full use of supporting measures such as reduced VAT rates for high efficiency heating systems and for insulation in buildings and other energy pricing measures, which encourage switching to heat pumps and purchase of more efficient appliances.”

The final prong is the most important, with new measures in place to accelerate the adoption of renewable energy across the continent. “A massive speed-up and scale-up in renewable energy in power generation, industry, buildings and transport will accelerate our phasing out of Russian fossil fuels. It will also, over time, lower electricity prices and reduce fossil fuel imports,” says the plan.

The Commission will now look to increase the penetration of renewable energy in the EU’s power supply to 45%. This will mean that a total renewable energy capacity to 1,236 GW will have to be installed by 2030, up from 609 GW at the end of 2020, and up significantly from the 1,067 GW outline under the Fit for 55 plan for 2030.

The EU expects solar, in particular, to account for this accelerated rollout. It wants to double its capacity to 320 GW by 2025, before reaching 600 GW by 2030. Much of this could come from the rooftop solar segment, as supported by the new European Solar Rooftop Initiative, which will see a legal obligation to include rooftop solar on certain categories of building.

This acceleration towards residential solar is already being driven from a consumer side, with as many as one-in-six German households planning to install panels to offset their soaring electricity bills.

The plan also acknowledges the need to “further strengthen the EU wind sector’s global competitiveness,” identify that “supply chains need to be strengthened and permitting drastically accelerated.” Laws will be upgraded to offer one-year simplified permits for some wind and solar projects. It will also aim to double the current deployment rate of individual heat pumps, resulting in a cumulative 10 million units over the next 5 years.

There will also be new support for hydrogen as a replacement for fossil fuels in ‘hard-to-decarbonize’ areas of industry and transport, with a new target to produce 10 million tons of green hydrogen by 2030 – while importing another 10 million from the likes of North Africa and Ukraine. Total investment needs are estimated to be in the range of €28 billion to €38 billion for the EU’s internal hydrogen pipelines with an additional €6 billion to €11 billion for storage. Much of this uptake will be funded through a new carbon contracts for difference scheme, which has yet to be fully detailed, but will likely tap the Commission’s emission trading revenues.

Biomethane production will also be accelerated to 35 billion cubic meters per year by 2030, through an investment of €37 billion, while other large chunks of spending will be funneled into trans-European grid upgrades (€29 billion), and new LNG pipelines (€10 billion).

One notable omission from the scheme is battery storage, which could threaten the energy security element of the EU’s plans. To make the most of the 1,236 GW of renewable energy that is being targeted, at least 190 GW of storage will be needed to balance the system – up from around 60 GW today, mostly from pumped hydropower. 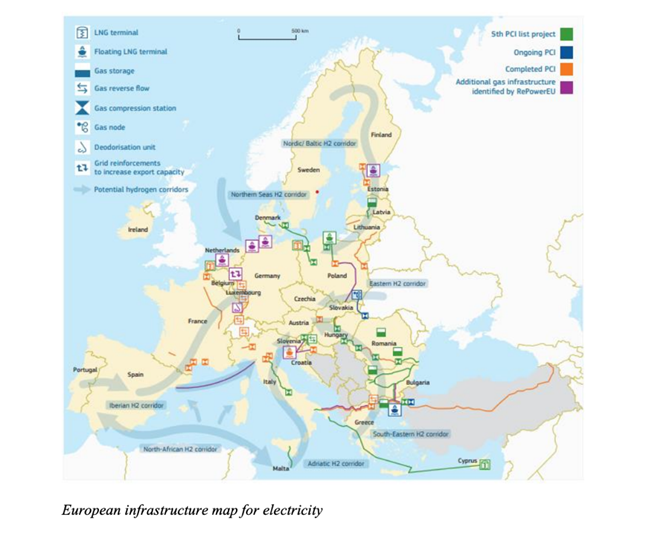 While the overall €210 billion budget for the plan seems steep, as it runs through to 2027, investments will pay off. The bloc anticipates savings of €80 billion from gas import expenditures by 2030 alone, as well as a further €12 billion from oil, and €1.7 billion from coal. Historically, the EU’s dependence on Russian fossil fuels has also cost European taxpayers nearly €100 billion per year. To support REPowerEU, €225 billion is already available in loans under the Recovery and Resilience Facility (RRF) package to help member states’ economies recover from Covid-19.