Fingers in many pies: Trina continues to differentiate by diversifying 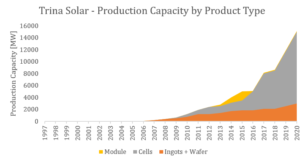 This series of articles aims to identify and examine leading players in the market and provide key, impartial insight into how their positions are likely to develop as demand for solar panels increases. Following our profiles on the top 3 manufacturers, we remain in China with our fourth profile on rapidly growing competitor, Trina Solar.

Similar to these other solar giants, Trina has evolved to operate using a vertically integrated supply chain, making use of low-cost materials and labor in its home country of China. Cutting costs from silicon ingot to complete solar panel, compared to global competitors such as Canadian and First Solar, Trina has been able to establish a significant foothold in the marketplace, and perhaps offer a greater level of differentiation than other market leaders.

Trina Solar was founded in 1997, as one of the first PV manufacturers in China. Initially focusing on module manufacture, the company developed China’s first building integrated PV technology in 2000. Trina diversified its operations in 2005 with the establishment of its first monocrystalline ingot manufacturing plant, before enlisting on the New York Stock Exchange in 2006. Through the 68% year-on-year growth in global solar installations between 2006 and 2016, Trina focused on both building out production capacity and technology innovation in order to stay at the leading edge of the market. Following this, Trina was among the first solar manufacturers to become vertically integrated, launching a cell manufacturing facility in 2007.

Beyond this, with demand for PV solar increasing, Trina has largely focused on scaling production capacity; a common theme through the industry. For Trina, this has primarily consisted of building out manufacturing facilities for modules and cells at the same rate, with ingots and wafers largely sourced from third party manufacturers.

Trina has tried to maintain its early market footprint, holding downstream development as a key part of the company’s visible profile, despite only accounting for 5.6% of the company’s sales in 2015. Despite this, Trina’s cumulative installations recently passed the 40 GW mark, reaffirming its place as one of the giants within the manufacturing sector.

The company’s globalization efforts have included the development of facilities in Thailand and Malaysia, while partnering with other manufacturers in the likes of Turkey.

To maintain market share, Trina will have to continue scaling this production capacity at all costs. Holding a position alongside the likes of LONGi and Canadian solar, we predict that the production capacity of both cells and modules will be build out to 15 GW per annum, with wafer and ingot capacity sitting at a more modest level of 3 GW, leaving opportunity for third party manufacturers to match this shortfall. As the industry continues to consolidate, this will see Trina’s market share grow from 8.0% to 8.4% between 2018 and 2020.

Trina is far from the only module manufacturer to look beyond its own walls for ingots and wafers. While there will be some inevitable scaling of the company’s in-house manufacturing capabilities, Trina appears to have more desire to focus on downstream development than on addressing the disparity in vertical integration within manufacture. In part, this is due to Trina’s notable historic bias towards polycrystalline technology compared to competitors through the general shift within the industry towards monocrystalline silicon.

While in the long run Trina will probably try to enhance its vertical integration through expanding its monocrystalline wafer production, costs are currently fairly low from third parties, and the company will be content to focus much of its expansion efforts further downstream in the short term, where future cost reductions may be greater.

This has been evident with Trina’s recent activity within the solar marketplace. Relative to competitors, Trina’s investment in research and development is fairly low, with around 1% of total revenues reinvested compared to 7% at LONGi. But the company has made a plethora of movements to go beyond PV manufacture, and further establish itself as a solar developer and a provider of fully integrated solar solutions, addressing LCOE reduction through economies of scale.

An early sign of this was the creation of storage subsidiary TrinaBESS in 2012, which supplies hybrid and retrofit batteries for both on-grid and off-grid installations. While TrinaBESS split from Trina Solar in 2015, keeping the ‘Trina’ handle suggests a close working relationship between the company as the former aims to become publicly-listed this year.

In 2018, Trina also unveiled its Trina Aurora, TrinaIOT and TrinaMOTA brands, addressing project management, the internet of things and asset management services respectively. With fingers in many pies throughout the solar industry, maintaining a widespread presence in the solar industry appears to be the company’s key tactic in promoting itself as a one-stop-shop for solar.

Trina’s new IoT innovation center has focused on encouraging research collaboration within the domestic smart energy sector, with the aim of optimizing and decentralizing energy production and storage.

In the same year as this was created, Trina also acquired Spanish tracking manufacture Nclave, making it the first Chinese solar company to acquire a solar tracking company outside of its home market. Immediately incorporating Nclave technology in the TrinaPro smart PV solutions, this acquisition further highlights Trina’s persistence in transforming from a manufacturer to an end-to-end developer. This also indicates a confidence in the European market, with continued uncertainty in the US around subsidies and trade tariffs.

With corporate headquarters in Changzhou, China, and over 16,000 global employees, Trina has always tried to push itself as a global brand. Unlike competitor JA Solar, where business remains primarily domestic, Trina has sold products in over 100 countries, with regional headquarters located in Singapore, Tokyo, Zurich and San Jose. Prior to privatization in 2016, 34.7% of the company’s revenues came from US sales, compared to 28.5% from domestic business.

With this success and dependence on the American market, it is no surprise that Trina was the first in the wave of Chinese manufacturers to go private following the introduction of 30% trade tariffs by the Trump administration, with uncertainty also surrounding the timing of the investment tax credit’s (ITC) phase down. Cutting ties with US investors would allow the companies to follow their unwritten obligations to their own country and guarantee more sustainable profit through domestic projects and supply chain.

At this time, the Chinese government had also issued guidelines to boost private investment in manufacturing, including financial support schemes, which particularly encouraged projects comprised around solar energy. The necessity to publish timely filings and financial reports for the companies’ diversified operations may have also contributed to Trina’s decision to withdraw from the NYSE. The uncertainty within the global market likely made retreating to private and domestic investment more attractive.

Despite Trina’s historic persistence with polycrystalline solar, much of the company’s commercially available technology entails monocrystalline cells. Products are split into utility, commercial, residential and smart categories, although they all largely use the same cell technology. Following an industry-wide trend, Trina has also recently adopted PERC technology, using a screen-printed silver paste to form contacts, decreasing the amount of reflection from the panel while increasing module power and efficiency by an absolute value of up to 1%.

Products are separated into the monocrystalline DUOMAX and polycrystalline TALLMAX, where respective efficiencies of 20.4% and 17.5% are fairly low among industry leaders. Both sets of these can come in 60 or 72 cell formats, with options to be mounted and for half-cut cells. With double the number of cells over the same area, daily operation of panels can be improved by half-cell technology by preventing the risk of shading or hotspots within the system. By connecting the two half-cells in series, Trina claims that the power loss by ribbon resistance is reduced by 75%, improving the overall efficiency of the module by over 2%.

Trina hails itself as a ‘pioneer of bifacial technology’, with bifacial panels able to increase electricity yield by over 15% in areas of high ground reflection. With the possibility to overlay multiple technologies, such as an overlay tracker, Executive President Rongfang Yin expects 50% of Trina’s global shipments to be bifacial products in 2020. This will be largely driven by the US market, where Yin expects 40% of installations to use bifacial modules.

With the company’s large footprint in the US in years gone by, the current exemption of bifacial modules from trade tariffs will be a prime focus for Trina solar while the exemption lasts, and while business continues to dip  in China due to the elimination of subsidies.

Due to its distributed global footprint, Trina has so far been less impacted by the push for parity in China than rivals such as JA and Jinko solar, although as domestic installations boom into the 2020s, the company will inevitably want to grab its share of the sales.

In terms of technology, Trina sees the future being dominated by bifacial-plus-tracker-plus-storage. The company has also indicated that it predicts wafer size to increase from current dimensions of 158.75mm and 166mm to 210mm in the coming years. Using multiple busbars, this may provide the potential to further reduce electricity losses within the panel and produce single panels with over a 500 W capacity.

Trina holds a very similar profile to that of SunPower prior to the Maxeon split at the end of last year. However, with access to a low-cost domestic supply chain, Trina faces fewer barriers in LCOE reduction compared to a US based manufacturer and therefore less likely to be forced into spinning of its development arm.

While Trina is to some extent pushing technological boundaries – achieving the 23.22% record for n-type polycrystalline bifacial cells this year – the company is more focused on becoming a one-stop-shop for solar development. Its key competition in this regard will be JA solar, which appears to be adopting the same tactic of complete vertical integration within development.

However, with less upstream focus and presence in the domestic marketplace, Trina will also want to reduce its dependence on an uncertain US market. The company’s technology will be fairly competitive in Europe, without imminent developments, especially if it continues to use polycrystalline silicon in the short term. It will be more likely that the company will try to increase its presence outside of China and the US, by reducing costs at a project level and increasing the contribution of its development arm towards company revenue. This mentality is likely to see Trina target more acquisitions within downstream technology like tracking and storage, to become a global provider of smart and integrate PV solutions, rather than a pure-play domestic solar manufacturer.

Vietnam to accelerate floating solar in conjunction with Hydro
Thin Film solar will continue to grow, but beware greenwashing