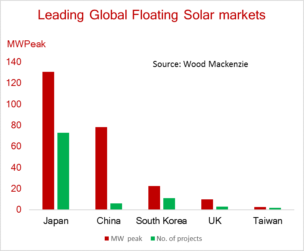 In the lead up to the Floating Solar Conference in Amsterdam next week, for which we are one of the key media sponsors, the organizers held a webinar on floating solar ahead of the event, where the main speaker was Molly Cox an analyst at Wood Mackenzie.

The talk really showered the idea of Floating Solar with faint praise and the procedural failings of Wood Mackenzie were in evidence – it has never knowingly over predicted a market, but has always fatally underpredicted them. We’re not sure why Cox was so pessimistic about the market, effectively saying it will peak in 2022, after which we presume she believes that the market place will simply curl up and die, never delivering more than 2.6% of global solar output. The event organizers would have been better served getting someone to speak who was more optimistic and had a longer term view out beyond 2024.

For instance there was no mention of Thailand except in the summing up about pricing, despite the fact that it is pioneering 2.7 GW of floating solar, across 9 dams to be built by 2037 as one of its major platforms for renewable development. It has built the first of these projects at 45 MW using a Ciel&Terre floating platform.

South Korea was rightly cited as the largest existing floating solar development at 1.2 GW, with the concession that “there may be one or two more larger projects of this type,” as if that then defines the floating solar market, done and dusted. The second largest single project that Cox cited was a 150 MW project in China.

Rethink Energy will come out with its own floating solar forecast in the coming months and one of the key things is that Thailand dam deal is going to create a new sub-market, and bring development focus on regions like Latin America and any other market that is currently not considering floating solar, but which is dependent upon hydro for much of their electricity. Latin America and Africa – both strong in hydro as a source of energy, were cited as only likely to supply 1% of the total global floating solar market. Harsh we thought.

Many of the countries that were cited as “good possibilities” for floating solar were countries which have desserts, such as China, which is a far more likely environment to put solar in than floating. Wood Mackenzie suggested that most of the deserts and the solar in China were in the west, and that most of the people were in the east and that this creates a transmission problem. By using the water surfaces in the East, solar can be closer to where the energy will be used. The same seems to be true of Dubai, which is close to plenty of dessert where it might to locate solar, but instead it seems to want to put floating solar in the Arabian Gulf.

India was cited as a key target for floating solar, although Wood Mac warned that all solar projects in India tend to run late, and often do not get built after auctions and that large water surfaces tend to be a long way from transmission links and large populations. Quite right.

Other floating solar platforms not mentioned was the Singapore development from the Sunseap Group, in the Strait of Johor, but it is in constantly moving sea, and the cost of building it is less clear and likely to be considerable higher as it needs to be more robust and is exposed to greater corrosion. This was announced back in November 2018 and when complete will generate 6.4 GWh of electricity a year. Wood Mac also said that build out costs varied wildly, citing China at $1.16 per watt, Japan as high as $2.76 and India at $1.01.