Nearly 25 GW of offshore wind capacity has been consented for development off the coast of Scotland. Of the 17 victors from Crown Estate Scotland’s ScotWind leasing round, the most notable fact is that more than half of the capacity will use emerging floating wind technology, laying the foundation for a huge global expansion of capacity within deep waters across the world’s oceans.

The total capacity equates to more than half of the 45 GW of offshore wind in operation at the end of 2021. It is also more than double the 11 GW that the UK – the world’s largest market for offshore wind – currently has installed.

The auction was one of the largest of its kind in the world and is the first Scottish offshore wind leasing round in over a decade, as well as being the first ever since the management of offshore wind rights were devolved to Scotland. The 25 GW of potential capacity is also far more than the 10 GW that many expected to see awarded.

In total, six fixed-based projects worth 9.8 GW were awarded leases, along with ten floating projects worth 14.6 GW, and one 495 MW project that will use a mixture of both. Several developers have stated expectations for projects to yield financial returns of between 8% and 10%.

Each GW of capacity will equate to around two coal-fired power plants in the UK and build on the country’s 35% share of renewables in its power mix. In total, the overall power demand can be between 20 GW and 47 GW per day, with Scotland accounting for just 9.7% of demand, with demand falling between 5 GW and 12 GW. In 2020, 97.4% of Scotland’s electricity came from renewable resources, as it fell just shy of its 100% target for the year.

The list of victors is dominated by joint ventures from European energy companies and oil majors including TotalEnergies, Shell, and BP. Offshore wind darling, but previous naysayer of floating technologies, Orsted was part of a consortium that was awarded a 1 GW floating wind project off Scotland’s North-east, despite being rejected in four other applications. Floating wind pioneer Equinor was among notable omissions, along with Eni, Red Rock Power, RWE, and a JV of Mainstream Renewables and Siemens.

The biggest winner was Scottish Power Renewables, which has the go-ahead for 7 GW-worth of projects, including 5 GW floating projects as part of a JV with Shell.

In unveiling the result, Simon Hodge, CEO of Crown Estate Scotland, said “Today’s results are a fantastic vote of confidence in Scotland’s ability to transform our energy sector.  Just a couple of months after hosting COP26, we’ve now taken a major step towards powering our future economy with renewable electricity.”

“In addition to the environmental benefits, this also represents a major investment in the Scottish economy, with around £700 million being delivered straight into the public finances and billions of pounds worth of supply chain commitments. The variety and scale of the projects that will progress onto the next stages shows both the remarkable progress of the offshore wind sector, and a clear sign that Scotland is set to be a major hub for the further development of this technology in the years to come.”

The 17 successful applicants have now been offered option agreements amounting to this £700 million sum, with the total value of the projects expected to exceed £50 billion. Should any not progress to signing a full agreement, the next highest scoring application will instead be offered an option. Such agreements will have to include supply chain commitments.

Such supply chain plans will need to have some focus on UK industry and local content. The UK government has long been criticized for awarding lucrative contracts to overseas companies – as it once again has in ScotWind – and then failing to ensure that local suppliers benefit from the country’s boom in offshore wind. New facilities will be needed to supply the 15 MW to 20 MW turbines that will likely be used for floating wind projects, as well as up to 1,000 floating foundations that will need to be fabricated – each of which will take 7 to 9 months to manufacture. Significant port upgrades will also be needed to facilitate the installation of each project.

Beyond this, the projects will have to go through consenting, financing, and planning stages – potentially through the UK government’s Contract for Difference (CfD) scheme – before the full seabed lease is handed over and projects can commence physical development. Consenting alone in Scotland usually takes between 1 and 2 years, with many sites in highly sensitive ornithological areas. The new wave of projects will add pressure to already-stretched assessment and planning bodies. More nimble consenting frameworks will be mandatory.

Projects such as the TotalEnergies-led 2 GW installation are aiming to come online by 2030, helping the UK to push towards its 40 GW target for offshore wind capacity in that timeframe. Many others will be looking at this deadline, as well as that of the 1 GW target for floating offshore wind by 2030, as set out in the Ten Point Plan for a Green Industrial Revolution.

Scotland itself is pursuing an 11 GW offshore wind target by 2030 as part of its wider climate and energy targets, including net zero by 2045.

The lead time between announcing a lease and an offshore wind farm entering operation in the UK is typically between 10 and 12 years, and with permitting delays impacting several project in early stages of development, the success of the UK’s 40 GW target will depend on how the UK improves its project approval rate and supply chain bottlenecks. Most projects will be looking at commissioning and grid connection between 2028 and 2035, depending on the expansion of Scotland’s export capacity. Currently this sits at around 6 GW, with massive subsea HVDC links required to make use of all of the upcoming capacity.

The awarded ScotWind projects will also bring forward the coordination of onshore and more complex offshore works, which could ease grid integration and reduce the number of cables required. Production and distribution of green hydrogen – as planned by many project applicants – would also help towards this.

It will also be dependent on the results of the UK government’s fourth CfD auction, from which Rethink Energy expects to see 6 GW awarded to ‘Pot 3’ fixed base offshore wind, as well as an additional 1 GW to 2 GW for ‘Pot 2’ floating technologies.

In recent week, BEIS also granted development consent for Vattenfall’s 1,800 MW Norfolk Boreas offshore wind farm, making it a frontrunner for funding in the upcoming CfD round, while Ideol’s 1.4 GW project in Scotland looks to be a likely candidate for floating wind.

This push for floating wind in the UK aims to once again push the country to the front of the offshore wind market, with China breathing down its neck for the installed capacity record, but focused primarily on fixed-based technologies. Scotland is already host to several small-scale floating wind projects including Equinor’s Hywind Scotland pilot, which has set a record average capacity factor of 57%.

“This will be the first time that floating wind is built at commercial scale,” said Rebecca Williams, head of offshore wind at the GWEC. “That has huge global significance, because it means that offshore wind can be built in places with deeper coastlines, like Japan and Taiwan.”

ScotWind also re-emphasized just how much opportunity and interest there is in developing offshore wind projects. For the 17 projects awarded, a further 57 applications were unsuccessful in this first round.

The awarded projects will cover 7,000 square kilometers in Scottish waters, limited by the 8,600 square kilometer maximum set out through the Scottish Government’s Sectoral Marine Plan. Crown Estate Scotland also capped the lease payments at £100,000 pounds per square kilometer. As a result, the payment for leases per GW were 94% lower than the average in recent English auctions.

Further details of the projects can be found here. 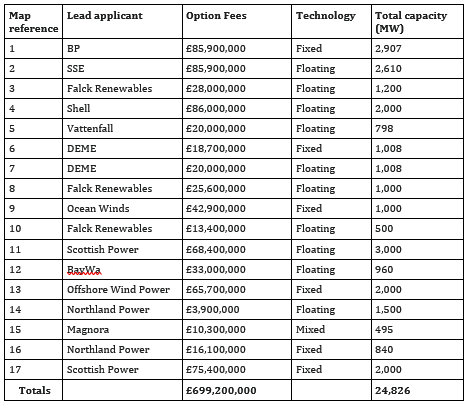 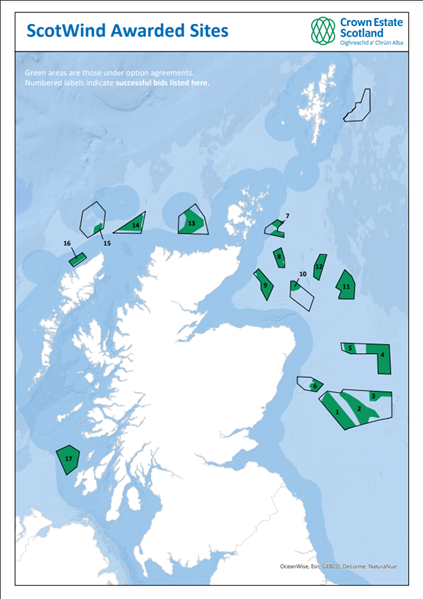