According to Voltec CEO Lucas Weiss, they are aiming for 28% efficiency, similar to the 24% to 27% claimed by Caelux in our recent interview with its CEO Scott Graybeal. Judging by Weiss’ descriptions – “We will directly deposit and etch the perovskite and various protective layers on the front glass of the silicon panels” and “Superimposing two low-efficiency layers costs much less than producing a single high-performance layer,” Voltec and the IPVF are aiming for the same approach we described in our interview with Caelux, where the perovskite is effectively a separate, additional, translucent (depending on wavelength) module deposited on the interior of a silicon module’s glass encapsulation. It is not the technologically challenging but superior monolithic tandem approach, which would require cell-level current matching across two different semiconductors – the approach which Oxford PV has pursued.

Only a technologically superior product will be able to survive in Europe, with its high power prices, unwillingness to sanction or tariff Chinese solar modules out of its markets, and lower manufacturing subsidies than the US. Perovskites will have much lower production costs than silicon PV, which will make them able to be built locally even in countries where electricity and other costs are high.

That’s not to say France is entirely disinterested – both Voltec’s CEO Lucas Weiss and IPVF general manager Roch Drozdowski-Strehl made statements portraying their initiative as contributing to France’s energy security. In 2019 the Macron government began working on various national and EU-wide initiatives to support solar manufacturing. This France PV Industrie project itself has been submitted to the Call for Projects for France 2030, which is being administered by the French Environment and energy Management Agency (ADEME).

France has been the intended destination for other solar factory projects such as Carbon’s 5 GW plan announced in March, and REC Group’s 2 GW heterojunction plant which received a government grant in July, having been originally proposed at 4 GW scale in 2021. It remains to be seen whether these proposals can weather Europe’s electricity price woes, if they have not already quietly been put on the back burner. An existing 44 MW module factory in Porcelette owned by Maxeon was shuttered in October.

The Institut Photovoltaic d’Ile-de-France is quite clearly the technological driver of this perovskite manufacturing initiative – already in mid-2017 a team of its researchers was able to attain 20.2% efficiency of a test cell. Five years later, a few months before this announcements, the Institute had reached 17% efficiency on a 40cm2 mini-module – which is a big improvement, because for perovskites the gap between cell and module efficiency is still usually around 10%. 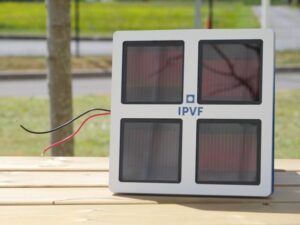 That mini-module was manufactured using a technique called Chemical Bath Deposition (CBD), which we haven’t heard mention of before from perovskite start-ups, and may therefore be unsuited to mass commercialization. The Institute states that the CBD method is cheap and high-quality, and is used for the ZnS and CdS layers in CIGS photovoltaics, but also that deposition and annealing took an hour each. According to the Institute the method allowed a highly homogenous deposition, allowing them to reach 17% efficiency at the module level with a just 2.2% drop from the 19.2%-efficient cells they were using.

In 2020 the Institute published its “PV technology vision for 2030” noting that silicon PV’s theoretical maximum efficiency of 29% is being approached ever more closely, while perovskite tandems can reach around 10% higher than that in theory. That same year the Institute signed an agreement with the French Alternative Energies and Atomic Energy Commission (CEA) to develop a tandem module, although this doesn’t seem to have come to anything, unless you count this year’s collaboration with Voltec as an outcome.

Voltec itself is France’s largest solar manufacturer, with 120 employees, which will reach 500 MW of production capacity by the end of this year. However this is only for the final, downstream module part of the supply chain, which is a very small part of the supply chain’s capex and for that matter technology. The company will most likely continue to source its cells from Asia even if the perovskite tandem initiative is successfully commercialized. The tandem pilot line will be built on IPVF premises, and if all goes well a 200 MW demonstration line will be overseen by Voltec with the first commercial sales in 2025.