Bloom Energy’s shareholders enjoyed a 35% jump in its stock price on Wednesday, after the company outlined its plans to enter the commercial hydrogen market – with plans to establish an early dominance in South Korea.

After years of toying with hydrogen-ready products, the California-based company announced this week that it will bring to market hydrogen-powered fuel cells and electrolyzers for the production of green hydrogen. Through a partnership with SK Engineering and Construction (SK E&C), Bloom will introduce this new range of products into the South Korean market in 2021.

Bloom’s core business has historically operated around its Energy Server system, which it developed for the initial intention of producing fuel and oxygen on Mars for NASA. The server is essentially a 250 kW fuel cell which operates on natural gas – reducing pollution levels from traditional gas-fired power generation because it does not use combustion. In October, Rethink Energy also reported on the company’s partnership with Samsung to produce its ‘Aframax,’ hydrogen-ready design for use in the maritime industry – again with early focus on South Korea.

South Korea has also been one of the core locations for Bloom’s success so far, with 120 MW of fuel cells generating $1 billion in equipment and service revenue for the company.

In June last year, Bloom announced that its fuel cells would be able to run on hydrogen to generate zero-carbon electricity. At the time, timescales were uncertain, but with green hydrogen starting to gain snowballing momentum, Bloom now expects that it can bring a 100 kW pilot ‘server’ to power one of SK E&C’s facilities in early 2021.

Through a three-year collaboration, this will be followed by a second 1 MW phase, targeted for 2022 deployment, with both companies committing to fully fund the projects off their own balance sheets.

Off the back of this, and the Korea government’s plan to deploy 15 GW of fuel cells by 2040, SK E&C has stated expectations that the pairing will reach the point of annual sales in excess of 400 MW in the country in the medium-term future.

The SK Group – the parent company to SK E&C – alone could contribute a significant chunk of this. It currently holds the position as the leading oil and gas provider in South Korea, with 3,400 gas stations. As the company aims to hold its market share, it will hope to develop many of the 1,200 hydrogen fuel stations to power the 6.2 million hydrogen cars the South Korean government is targeting for 2040.

Bloom now stands in great stead to capitalize on this, especially in light of its entry into the upstream electrolyzer business, through its patented solid oxide technology. With its natural-gas fuel cell technology being fairly adjacent to that used in electrolysis, this move isn’t all that surprising in light of the growing support from governments in the green hydrogen sector. With many established electrolyzer manufacturers operating out of Europe, including Nel and ITM Power, Bloom could be sitting on a nest egg that will materialize when the Asia-Pacific region follows the ambition we saw in the EU’s hydrogen strategy last week.

More and more competitors are starting to flood into the electrolyzer market, including those who traditionally made fuel cells, and an early lead may be vital – last month we saw a similar move with Plug Power’s $1.2 billion acquisition of Giner ELX to develop an electrolyzer vertical to pair with its fuel cells. 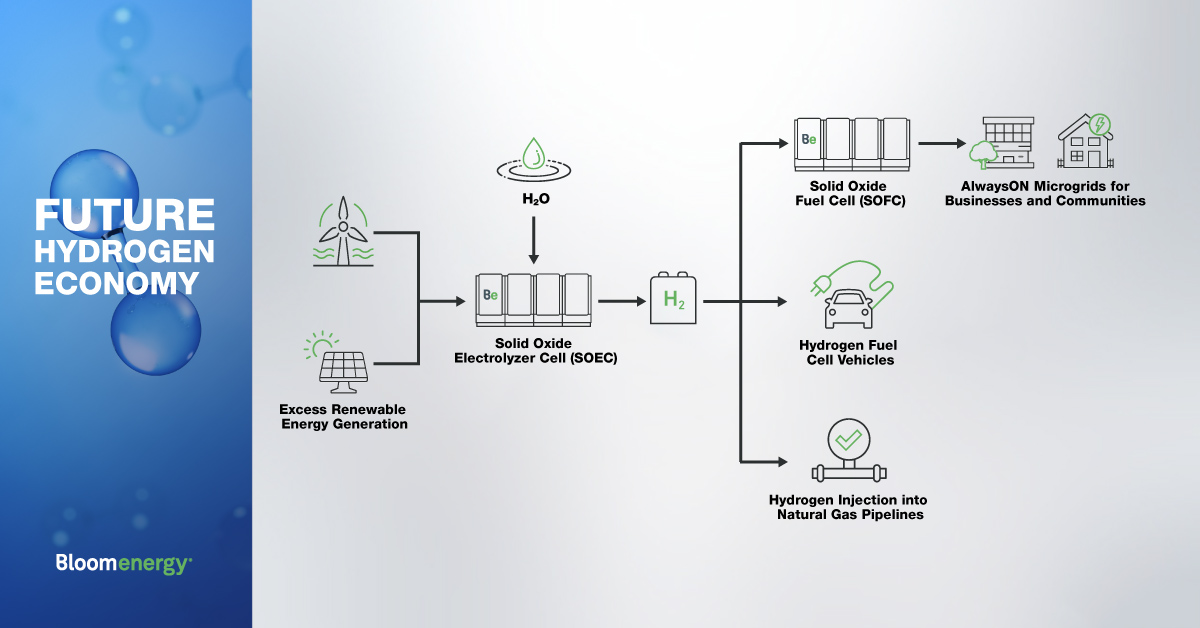