Back in 2020, Germany’s required grid investment through to 2050 was calculated to be $130 billion by a study commissioned by E.ON, which is to say a little more than $4 billion spend per year, likely to have been spread out through the whole period and local legal challenges obstructed large-scale project developments.

Since then a Green coalition government got elected, Nordstream 2 was cancelled – and of course supplies of fuel from Russia are being shut down as fast as EU governments can manage it. By April 2021, a Grid Development Plan put out by the four transmission system operators (TSOs) foresaw $84 billion being spent by 2035, so under $6 billion per year.

The pace of the energy transition was been forced into overdrive, with the 65% by 2030 clean power target first raised to 80%, then a further 100% target for 2035 added – that’s 20% of the grid being reworked in just five years. The new solar target required new installs nearly tripling to 143 GW even before the sanctions – now Germany wants to reach annual installs of well over 20 GW from the latter half of the 2020s. Already in Q1 installations are up 25% – while North Sea wind will prove a still more powerful source of green energy – with 30 GW by 2030, and another 10 GW by 2035, though it can’t manifest an immediate quarterly jump. Then there’s potential for 200 GW of onshore wind by 2040, if land permissions are eased.

We can get an idea by looking at the four transmission system operators (TSOs) – Tennet, 50Hertz, Amprion, and Transnet BW, although they are only one source of grid investment alongside utilities such as E.ON. Tennet serves 41 million, but this includes the population of the Netherlands, while 50Hertz serves 18 million, Amprion 29 million, and Transnet 11 million. 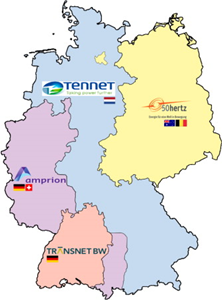 In March TenneT announced it would increase its annual grid investment to $6.6 billion annually by 2025, up from a record $4 billion in 2021, “in view of the steep rise in the production of renewable electricity and society’s overall electrification.” That’s almost as much as its revenue – which is $6.8 billion – and the company raised $4 billion from a Green Bond this year. Before the German election in 2021, Tennet was planning to intensify its grid investments only to $5.4 billion.

March was also the month that 50Hertz announced it would increase its investments to $6 billion in the 2022 to 2026 period, which it referred to as “nearly twice” the amount invested in 2017 to 2021. The company attributed the intensification not just to renewables, but also an anticipated 30% to 40% rise in demand from electrification and a shift of industrial activity into the area, motivated by disproportionately clean power generation which industries can lay claim to – and while this expected rise in demand seems rather optimistic given current economic turmoil, it is true that the eastern German areas saw a few percentage points of demand growth year-on-year, which may be more than just a recovery from 2020. Stefan Kapferer, CEO of 50Hertz, is among those who have called for legislative support for grid expansions.

Amprion announced in May that it would be investing $12.8 billion through to 2027, with a nod to North Sea wind transmission even though its holdings do not extend to the coast. Amprion’s major projects, for the second half of the decade, include the 2 GW A-Nord from Rhineland to North Sea, BorWin4 and DolWin4, both 2 GW and in the North Sea, and the 4 GW Corridor B, a 4 GW line running from the North Sea to the Ruhr. So the company has $2.5 billion average spend in the period, close to double the $1.3 billion in 2021.

As for Transnet BW, EnBW’s Grid Development Plan from 2021 saw the need for a $10 billion investment by 2035 the north-south Suedlink and Ultranet HVDC lines being major projects needing finance. EnBW has been looking to sell much of its transmission business, Transnet BW, with a price tag of $3.2 billion for a 49.9% stake, and it would appear that unlike its peers, it can’t promise investment commensurate to the new era until it gets someone to buy in.

So if we count only half of TenneT’s investments as German – it has fewer consumers in the Netherlands, but more offshore wind to connect there – that gives us an idea that annual grid investment in Germany from TSOs has risen by over 50%, to over $7.5 billion, for the next five years, and that this will only continue to accelerate.

In February, before the invasion of the Ukraine, the German Federal Network Agency predicted an extra investment cost of $59 billion through to 2030.

A common theme among the two coastal utilities is the planning for multi-GW offshore capacity – by 2030 this is to reach 38 GW for TenneT and 7 GW for 50Hertz. In January these two companies formed an alliance regarding integration of 4 GW via a 200 km buried HVDC line to Mecklenburg-Vorpommern, and in November TenneT revealed plans for a 6 GW “offshore grid hub” of booster stations, which in due course will be connected to other North Sea countries.

The major shape of the coming grid investment is that Germany’s solar will be skewed to the south, also the location of pumped hydro storage, while its wind will be skewed to seas in the north. So a lot of the overarching transmission infrastructure will be north-south HVDC lines running from Bavaria to the North Sea and the Baltic.