Germany occupies an ironic position in the energy transition. It has long remained Europe’s strongest solar power market by far, it is at the heart of the EU which strongly pushed the green agenda, and yet its own energy transition has been lacking. Coal is pretty much dead and buried across the rest of Western Europe, but in Germany it’s still a quarter of generation. With 12% of power coming from nuclear, which is going to be totally closed down this year, even the new Green coalition government can’t end coal until 2030 and gas will persist more than a decade further than that. In 2020, the country even built a new coal plant.

Germany’s new government has set some very ambitious targets for 2030: 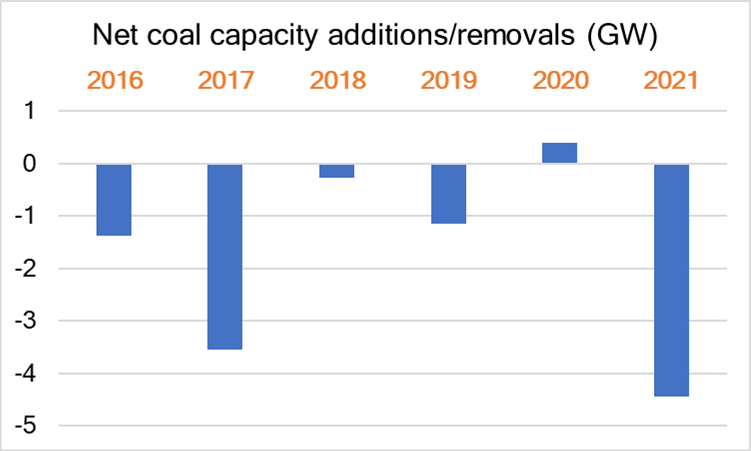 Compared to the previous center-right Merkel government’s plans, this is a doubling of the pace of the energy transition. Targets set in 2020 were just 100 GW and 71 GW solar and wind. In particular annual solar installations have to average 15 GW from now on; or more realistically, they have to double from 2022 to 2024 and then have compounding growth of 15% thereafter.

It is reassuring to see the government already making specific provision for expanding the transmission network, whose limitations have already impaired the usefulness of northern wind farms to Bavarian consumers.

All told, this is about $400 billion in investment over the next nine years, over 1% of total German economic activity in the period.

“All suitable roof surfaces are to be used for solar energy”

Germany’s Feed-in-Tariff has been gradually reduced for more than a decade now, but unlike so many other European states the solar industry never ground to a halt entirely after 2011. Like Japan it has been trundling along growing steadily, but less than the world average in recent years.

With annual deployments set to triple, the question is what new incentives and initiatives are going to be brought to bear.

The commercial rooftop segment open for subsidy bids in Germany’s auction system is set to increase from 300 MW to 2.3 GW from 2021 to 2022, though with only 383 MW of bids deemed valid in 2021, it is unlikely that all 2.3 GW will be met with correctly filed bids this year. All rooftop projects over 300 kW are required to participate in the national tendering scheme.

In contrast, utility-scale options will remain constrained. There are a few full-scale utility solar plants in Germany, such as the 187 MW Weesow-Willmersdorf, also notable for being subsidy-free and part of Germany’s growing PPA market. The very first PPA-based project in Germany was signed for in 2019, while the national tender system is limited to projects below 20 MW scale.

Proposals from the new government to open up land availability have been criticized as insufficient by the German Solar Association (BSW). The new government is highly likely to open up permission for agri-voltaic installations, but again the BSW is unsatisfied, saying that such installation would need an auction system to support the extra costs compared to solar plants in unused land. The Climate, Agriculture, and Environment Ministries are all held by the Green Party.

Easing approvals and permits can itself reduce costs, but the question is what incentives will be brought into force for rooftop systems, which are outside the national tender scheme. Currently the Feed-in Tariff is declining at 1.4% per month, with EUPD Research claiming payback time will reach 22 years next year for sub-10 kW systems. The government does not seem to have settled on a solution yet but the most obvious would be to simply increase the FiT back to historic levels.

For onshore wind, government proposals have reserved 2% of total land area for turbines, and relaxations of land use relating to radar and the military should immediately open up 9 GW in development opportunities from those two categories – this will be part of Minister of Economics and Climate Robert Habeck’s “Easter Bill”.

Volkwagen-Daimler-Mercedes give in to EVs

Germany EV uptake was slower than the rest of Western Europe until very recently, due to Germany’s powerful manufacturing lobby. Only in the past year have they finally given in and decided they can’t escape from looming EU deadlines. Daimler embarked on a $47 billion EV investment program and its parent Mercedes is readying itself to be 100% electric by 2030. Volkswagen’s global EV sales nearly doubled last year to 800,000, and has a 50% EV output target for 2030.

The new government, elected in September, consists of the Social Democrats, the Greens, and the FDP. The first two sit well together on renewable energy, but the FDP is a fiscally conservative party which previously worked to limit renewables spending when it was in government with Merkel’s CDU. However, since it has young, wealthy, urban voters, it has no ideological opposition to the green agenda; at worst it may dig its heels over spending and doesn’t seem to have done so yet.

Instead, to the extent that the government is continuing to tolerate fossil fuels and limiting its support for renewables, it is over the dependence on natural gas and the Europe-wide high electricity prices. For gas there is much to be said about pipelines, and little being said about decommissioning. F

or electricity prices, one measure taken to spare consumers has been cutting the energy tax used to fund the renewables subsidy by 40% to $43 per MWh, and more recently the decision to abolish it entirely – although government funds taking its place for renewables projects.

With so much weight behind renewables and coal put on an 8-year lifespan, the government’s stance on gas makes quite a contrast. Net Zero in 2045 certainly implies that gas will be done for by then, but all we hear about right now is Nordstream 2, gas prices, and power prices.

Gas was over 15% of generation in 2021, which may not sound like much, but another 40% came from coal and nuclear, which are both on the way out, which makes it very hard to get rid of gas out of the power market any time soon.

Nordstream 2 was originally proposed not by the Kremlin, but by Berlin, again under Merkel. Germany has an Atlanticist media which supports America’s opposition to Nordstream 2, which is now backed up by a solidly anti-fossil fuel government as well – incidentally, the Green Party dislikes Russia more than the rest of the political spectrum of Germany. What it does have is a business community which is more manufacturing-reliant and more politically powerful even than in the rest of Europe. That lobby is defending its bottom line, which for now is natural gas.

Olaf Scholz, Merkel’s successor, has refused to commit to cancelling Nordstream 2 even in the event of a Russian intervention in the Ukraine, even while being pressured by the US and the Ukraine repeatedly. But he also hasn’t told the US to back off and let the Russians send gas through the now completed pipeline either. Similarly the US doesn’t want to directly sanction its ally Germany either, but is stopping it from using the pipeline. And then there is the ongoing war scare in the Ukraine itself, which has been sensationally reported far beyond the reality, which is that military threats are only a diplomatic tool and neither side wants war.

It is all a very awkward and strange impasse even before you consider the odd concept of “reverse flow”, under which the Ukraine purchases Russian gas from European states – at European prices, which is very unfortunate right now. Or the way that the US and UK have voiced the most concern over the potential war, while the Ukrainian government has instead tried to downplay the situation as its credit rating tanks.

Nordstream 2 is in the immediate interests of Germany’s business community. It is most opposed by the US, which has its own gas to sell, and the Ukraine, which charges transit fees for the pipelines running through its territory – Nordstream is in the Baltic.

One might wonder if there is a Biden Administration green agenda at play here, trying to force gas prices up and supply down to hasten the adoption of alternatives. Natural gas plants having their marginal costs pushed way up certainly makes things easier for renewables to compete through their own supply chain difficulties. But that can’t be the main motive, since the anti-Nordstream position was originally adopted by President Trump.

The Russians would like to sell more gas to Europe, but with all the diplomatic and other nuisance it puts them through, they must be looking with relief to their tranquil relations with China, with which they have recently agreed a similar pipeline. European states have generally refused to sign long-term contracts, with Eastern EU members under pressure not to do so.

Ultimately the question to ask is which way this impasse will finally fall – with Nordstream 2 carrying another 55 billion cubic meters of gas to Europe a year, or not? Increasingly it looks like the US and company will succeed and strangle the project. In which case, a blow has been struck for Germany’s energy transition pace, not to mention that of all its neighbors.