Revenues from Carbon Pricing across the world rose by 60% in 2021, hitting $84 billion for the year, according to a new report from the World Bank. As emission trading schemes start taking over from conventional carbon taxes, the future success of this financial stick will depend on how effectively border adjustment mechanisms can be deployed or how quickly the world can settle on a unanimous floor price for emissions.

In its report, entitled States and Trends of Carbon Pricing, the World Bank detailed 68 operational pricing policies that directly target carbon emissions: 36 carbon taxes and 32 Emissions Trading Schemes (ETSs). Four new instruments were implemented over the past year, including one in Uruguay and three in North America (Ontario, Oregon, New Brunswick), while Israel, Malaysia, and Botswana were among those which announced plans to implement new carbon pricing schemes.

In many of the markets where they are currently operating, the cost associated with carbon emissions hit record highs. This happened in the European Union, California, New Zealand, the Republic of Korea, Switzerland, and Canada, where a resurgence in post-pandemic industrial activity saw a surge in demand for carbon credits, while the schemes that distributed them – often by design – provided a tighter limit on the number of credits they were willing to dish out.

With the European Union operating the largest trading scheme, through its EU ETS, the bloc received more than 40% of all carbon pricing revenues through the year, with its price rising from €30 per ton in 2020 to over €80 per ton for much of 2021. Investors are also showing increasing interest in carbon markets, with trading increasing 164% in the past year, rising to $897 billion.

“The past year has seen some very positive signs, such as the significant increase in revenue that can be invested in communities and in supporting the low carbon transition. There is also good progress towards resolving cross-border issues related to carbon pricing and the adoption of new rules for international carbon markets that was agreed at COP26 in Glasgow, which helps set a clearer policy direction,” said Bernice Van Bronkhorst, Global Director for Climate Change at the World Bank.

“It is important now to build on this momentum and really ramp up both the coverage and the price levels to unlock the full potential of carbon pricing in supporting inclusive decarbonization.” 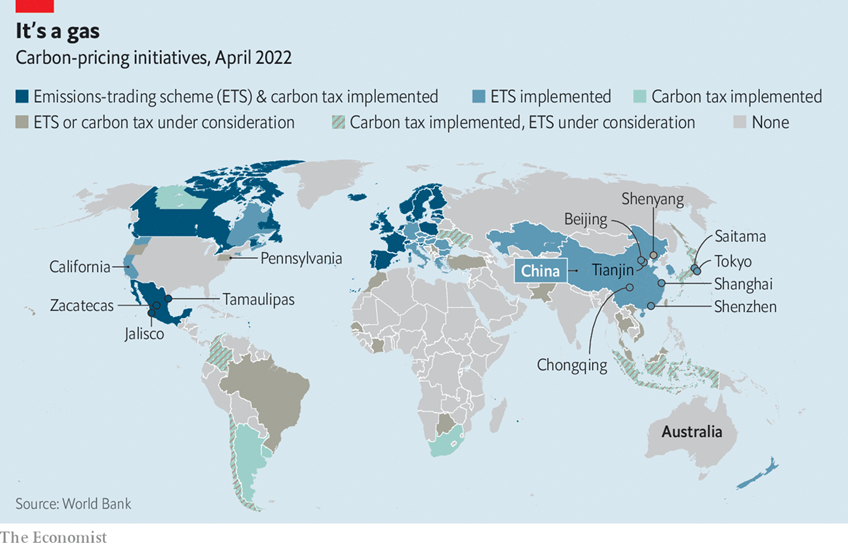 Indeed, while carbon pricing systems now span across much of the developed world, just 3.8% of global emissions – largely those in Europe and the UK – are now covered by a carbon price that is high enough. To be consistent with the Paris Agreement through to 2030 – which has now been signed by nations accountable for 97% of global emissions – the Carbon Price Leadership Coalition believes a price of $40 per ton is needed. Others believe that a price of $200 per ton will be needed.

Another 17% are covered by less rigorous schemes, which will inevitably see prices rise. By the end of 2021 more than 21% of the world’s emissions were covered by some form of carbon pricing, up from 15% in 2020.

Such schemes mean that businesses have to pay regulators for the right to pump carbon dioxide into the atmosphere. They place fossil fuels at a disadvantage, while encouraging investment in clean technologies. The revenues from carbon pricing schemes are also vital through the current period of economic inflation. Funds can be a crucial source in supporting the broader economic recovery, while investing in a low-cost, low-carbon future.

Historically, the ETS has proved to be a hugely successful system in driving the demise of coal in Europe, with proceeds often helping to promote the green energy transition – Germany used €33 billion of its income from the scheme to fund its €54 billion Climate Action Plan. Such a mechanism would also be a fantastic alternative to the controversial windfall tax in the UK, which has brought in suppliers of renewable electricity, in a bid to skim off the profits from companies benefiting from elevated oil and gas prices.

This year’s report also points to a notable shift towards ETS schemes, over traditional carbon taxes. The latter operates using a set price per ton of carbon that companies must pay in relation to their emissions.

ETS schemes typically operate on a cap-and-trade basis, where governments place a ‘cap’ on the number of credits that can be sold in a year, and the volume of greenhouse gas that can be emitted by the industries covered by the scheme. Companies can often choose to buy additional allowances or ‘trade’ surplus allowances to other companies. Some of these schemes also allow financial companies to trade these credits in the same way that they have traded commodities in the past.

The best-designed markets, such as the EU ETS, reduce the number of credits that are available each year, and put limits on the number of credits that can be carried over from one year to the next. They also cover the broadest spectrum of economic activity, with efforts made to encompass a growing share of emissions within their respective markets, such as those from ICE vehicles or the maritime industry, after taking on the low-hanging power and industrial sectors. The Regional Greenhouse Gas Initiative in the USA only covers power generation, for example, California’s ETS has managed to bring in a big chunk of consumers’ carbon output to cover over 80% of the state’s total emissions, pushing this through by using the proceeds to subsidize the cost of electric vehicles.

Most schemes fail to tick these boxes, while momentum behind the growing scope of carbon pricing schemes seems to be stuttering. This is because of the political risk of raising taxes at a time when the cost of living is rising at an unprecedented rate for many. Higher carbon prices will raise consumer prices further in the short term, while vexing many of the firms that donate heavily to political parties. France’s Gilet Jaune crisis was spurred by Emmanuel Macron’s plans to raise the country’s tax on petrol and diesel.

This is also the reason that prices in many of the schemes remain low. The European Commission recently said that it would throw another 200 million permits into circulation, in response to the bloc’s energy crisis. This will increase the number of annual credits by 15%, and pushing prices down from €90 per ton to €80 per ton. China’s ETS, which covers the largest chunk of global emissions, has such a large supply that prices remain suppressed at $9 per ton.

The powering of lobbying in the USA is a key driver behind the country’s inability to get any sort of national carbon pricing scheme off the ground. Only the states of California, Washington and Oregon have a direct mechanism in place.

Another risk in implementing aggressive carbon pricing is that you scare off industrial firms from domestic manufacture. High pricing can promote “carbon leakage”, where an unfair advantage to those exporting from countries with a lower carbon price. It can also incentivize domestic manufacturers to move their production facilities abroad to places with looser standards.

This can be tackled by providing a certain number of free credits to domestic companies. The EU is also hoping to install a ‘carbon border-adjustment mechanism,’ to come into play from 2026, under which importers within the bloc will be required to buy carbon certificates corresponding to the carbon price that would have been paid, had the goods been produced within the EU itself.

While sparking a protectionist debate with the WTO and the OECD, this provides the first step towards linking carbon markets, as has already been done between California and Quebec, as well as between Switzerland and the EU. This moves the global economy towards an international carbon floor price, which could cut the costs of fulfilling the Paris Agreement by 79%, according to the Environmental Defense Fund. The IMF has outlined that a price of between $25 and $75 per ton could align the world with a 2-degree limit on climate change, while only impacting global GDP by 1.5% by 2030, and with most of this impact being taken by high-income countries. It would ensure that the costs of transition are allocated according to differentiated responsibilities between countries of different income levels through differentiated carbon price floors. 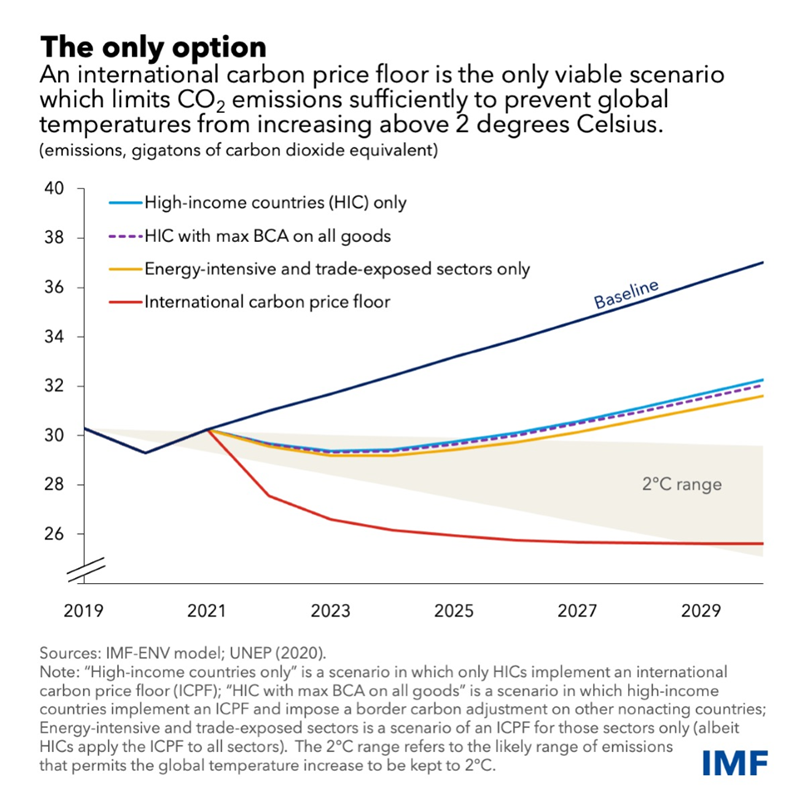 This concept remains a pipedream for now. But with the EU being one of the world’s largest importers of goods, it is becoming increasingly imperative for countries to start generating their own carbon pricing schemes. Japan, a key objector of such pricing, is likely to start up its own carbon market in September. In the USA – largely following an anti-China rhetoric – momentum behind the idea seems to be rebuilding.

China accelerates in EVs, while US keeps its foot on the brake
Polysilicon expands outside China, prices to rise throughout 2022