Global methane budget on the rise, up 9%, blame fossil fuels

Rethink Energy is about renewable energy, not climate change. But a report out this week from the Global Carbon Project (GCP) highlights a dramatic change in the emergence of anthropomorphic methane, likely to help us miss all the IPCC warming targets.

Most people know that methane is a more problematic gas than CO2, in that it can absorb more heat than CO2 to retain in our atmosphere. On the other hand methane does not stick around as long as CO2, and it seems to react with other agents to take it out of our atmosphere relatively quickly (in under ten years).

But if it continues to be produced faster than it can be absorbed, it has the potential to capture heat into the Earth’s atmosphere more rapidly than CO2.

While CO2 is measured in parts per million, and the number we are trying to avoid is anything over 500, methane is measured in parts per billion, closer to 12 – a small amount creates a lot of heating. Cutting to the chase, global measurements last taken fully in 2017 are now finally in, and the GCP is saying it has risen 9% since last measured ten years earlier. All of the increase is man-made, from either the extraction process of natural gas, particularly fracking, but also both accidental and deliberate leaks and inadvertent emissions in extraction, and of course farming.

There is so much evidence that much of this change has come in the US, where new satellite imagery has shown more and more substantial leaks of methane being ignored by irresponsible natural gas suppliers. The GCP confirms this and offers both a top down and down up measurement, which don’t quite tally, which show very clearly where most emissions are coming from.

While there is a considerable amount of methane coming from the rearing of animals, wetlands, and the growing of rice, rotting vegetation, and the processing of waste generally, the largest increase is from fossil fuel production and agriculture. Around 60% is anthropomorphic or man-made, and 40% natural.  The diagram below best shows where it is being produced. 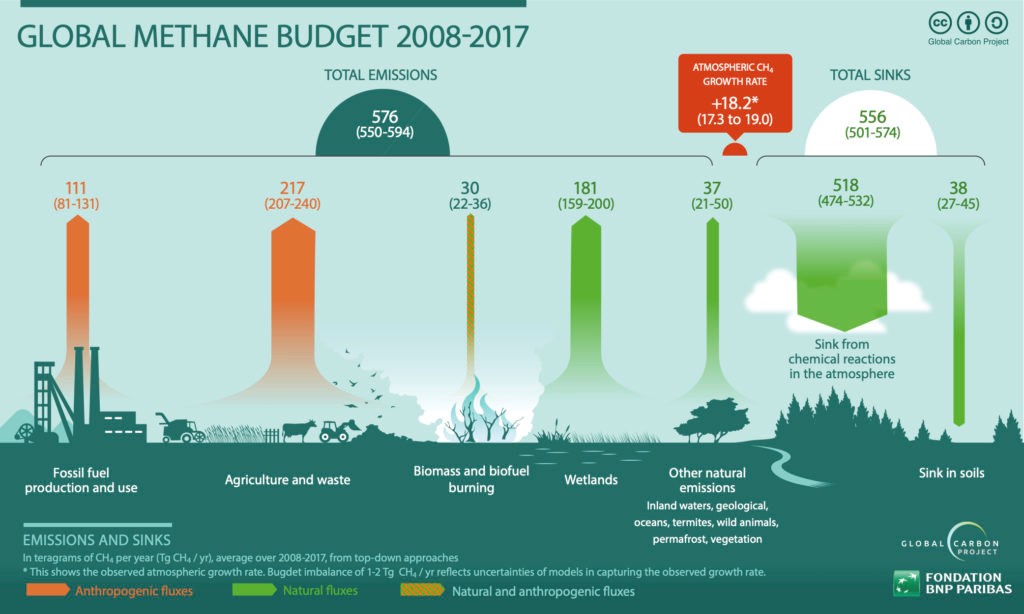 The increase in total comes to 50 million tons in the air now, compared to a decade earlier.

Most estimates of the effects of methane are that it is 28 times more climate warming than an equivalent amount of CO2, so we could be getting close to a point instead of saying CO2 is a problem, and that methane is a minor contributor, we could be reversing that position, and methane may become the main actor in the market. The simplest was of reversing that is to use less natural gas, and give companies less incentive to take it out of the ground.

That should logically lead to a methane tax, and spot fines for fossil fuel companies around leaks. They seem largely relaxed about releasing methane into the atmosphere, particular in countries where regimes are tolerant of fossil fuel growth (USA, China, Russia). These companies need to be discouraged from allowing leaks to go un-fixed for months at a time, and any financial incentive put in place will have an immediate effect on the consumption of renewables, having the effect of making them ever cheaper.

The study was conducted by an international research team and led by the Laboratoire des Sciences du Climat et de l’Environnement (LSCE, CEA-CNRS-UVSQ) in France, under the umbrella of the Global Carbon Project which took in 90 separate collaborators.

Anthropogenic emissions are shared as follows;

– 30% from enteric fermentation and manure management

– 22% from oil and gas production and use

– 18% from handling solid and liquid wastes

– 8% from biomass and biofuel burning

The three main regions contributing to this methane emission increase are Africa, China and Asia, each contributing 10 to 15 million tons and North America, with more like 5 to7 million tons. European emissions have decreased.

Currently, methane concentrations are increasing at a rate of about 8 to 12 ppb/yr and their untrammeled growth will take the planet over 4°C of warming. Watch out for this leading to legislation at some point.