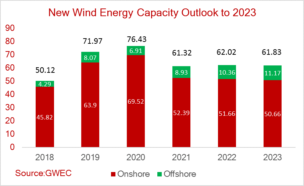 The Global Wind Energy Council came out with a update to its numbers this week, forecasting a well anticipated blip in wind Turbine installations, which will come after both the USA and China close out tax and subsidy incentives to build out wind projects after 2020.

The tiny CAGR of just 4% is seen operating across the market, showing how mature this market has become, and its numbers also show the shift to offshore activity, which seems to be rising far faster, with China supposedly demonstrating a CAGR of 8.2% now, which will accelerate to 12% CAGR after 2024.

GWEC talked up the idea that 60 GW was the real market, and it was going up from there and had been the inflated during 2019 and 2020 down to government incentives.

Its numbers in fact come from published Government targets, project data and GWEC members and when you take the US and Chinese numbers out, you see the rest of the world is on an upwards trajectory, but only at net 3% CAGR.

We wonder when we see a report like this. GE during 2021 will launched a 107 meter blade wind turbine, and both Vestas and Siemens Gamesa have a slightly smaller, yet significant upgrade to top out their systems. This means that the LCOE of wind will come down dramatically – turbines will produce more energy for less money. So a rise in the output numbers of only 3% to 4% is virtually a disaster for the turbine companies in terms of cash, not sweetness and light after all. No wonder Larry Culp, CEO of GE is saying that he is seeing an end to constant prices pressure – he better had, or revenues will shrink considerably.

What GWEC does insist is that Government and Regulators in most countries are still behind wind, despite the fact that solar has fallen even more rapidly in LCOE and as it partners with energy storage, it begins to look an easier sell to operators. And GWEC talked about the subsidy free era arriving in 2021, and being good for the wind industry. We would reckon that far more GW capacity than GWEC forecasts will install in the mid-term future, and once again, its approach ignores anything which is not a government auction, and not already in development. Surely in a subsidy free era, that can be quite a large chunk of the market.

In its quarterly variance data, GWEC told us that the China will now install 10 GW more wind than it previously thought and that the US would also put out 6.5 GW more. However the shortfalls in Germany (permitting problems), India (Transmission connection issues) and Mexico (suspended tender program) would counter this by falling 15.3 GW, leading to the order flow moving from 324.6 GW being installed between 2019 and 2023 to one where 333.6 GW would be installed during that time roughly 82.5 GW a year.

GWEC highlighted Africa as just coming onto the graph, with 0.8 GW in 2019, maturing to 2 GW in 2020 and 1.8 GW again in 2022. Similarly the rise and rise of offshore wind means it would go up from 8.1 GW in 2019 to 11.2 GW in 2023. Brazil was also highlighted as one of the fastest growing markets in the world in onshore, and the suggestion that the Brazilian offshore market was closer to being developed than most people thought.

Wood Mackenzie, as if to steal the GWEC thunder, came out with their own numbers a few days later, saying that wind developers had placed orders for 31 GW of turbines during the second quarter, the highest volume on record, and 79 GW over the past 12 months, according to its quarterly analysis of the turbine market. Wood Mac agreed with GWEC that the order surge comes as developers race to beat subsidy deadlines in the world’s two largest wind markets, China and the US. Developers usually order turbines about a year or so before building a project says wood Mac, suggesting that 79 GW may well be the amount to be installed in the next 12 – not so far from that average rate that GWEC suggested of 82.5 GW a year for the next 4 years.

Deeply suspicious as we are of Carbon Capture – it may work – a bit
Oil firms treat 2.7ºC warming as fine – feel no Paris pressure