How big is the WiFi Gap

A while ago a major client asked us to quantify broadband globally, and it has given us lots of data to point out disparities between how connected the world is. Of course China is way out on its own when it comes to WiFi, with 4.8 million hotspots, many of them owned by China Mobile, and delivered in partnership with coffee bars, restaurants and hotels throughout China. But China only ranks fourth in this table, bearing in mind that it has a population over 1.3 billion people, so some 281 people have to share each WiFi hotspot. 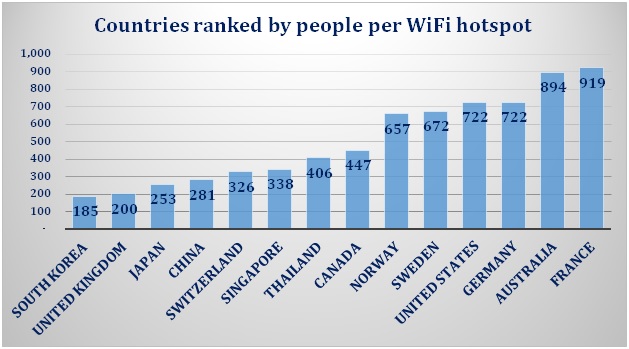 This is perhaps why many of the countries mentioned above have focused on turning the humble home gateway into another kind of hotspot, the Homespot. Huge investments in public WiFi hotspots is perhaps not the right way to go to connect a society.

South Korea has legendary Internet Cafes, and it is no surprise that it wins this particular measure at 185 people per public hotspot. What is surprising is the way British Telecom in particular and in the UK in general, has outstripped every other European country, by quite some way, coming in second at 200 people per WiFi hotspot. BT alone has something over 300,000 hotspots of its own in public places, and that’s before we add in EE, which it is on the verge of buying.
Also ahead of China is Japan, where three operators have fought it out to dominate WiFi Hotspots, all investing heavily over a long period, NTT, KDDI and Softbank and yet these only account for about 75% of the WiFi hotspots in Japan, as many smaller companies still retain an investment in this area.

The United States has heavily underinvested in WiFi, and 722 people share each WiFi hotspot across the US. There are some really well connected areas of the US, but there is a large rural population that barely has heard the term, and this is also true in Germany, Australia and France. Of these France has introduced the most Homespots, at almost 14 million, to make up for it, while the US is catching up fast through Homespots, now up to well over 13 million, while Germany has just 2.3 million and so is under invested in both traditional commercial Hotspots and home based Homespots.

Thailand is perhaps one of the biggest surprises with 165,000 Hotspots for its 67 million people, but to date there is not a Homespot in sight.