Hydrogen central to UK’s net-zero, but green focus must accelerate

The UK government has outlined the long-awaited roadmap behind its target to install 5 GW of clean hydrogen production by 2030. Disrupting the use of natural gas in applications from cement making to home heating, ‘green’ hydrogen – produced through renewable electricity – is becoming increasingly central in the UK’s route to cutting emissions by 78% by 2035 and reaching net zero by 2050. Despite lingering investments, ‘blue’ hydrogen – produced using natural gas and elusive carbon capture technologies – is becoming an increasingly small stepping-stone.

With a focus on ‘hard to decarbonize industries’ and domestic heating, the 121-page strategy document outlines that hydrogen could account for up to one third of the UK’s energy demand by 2050, at which point the country hopes to have reached net zero emissions. It also sees the UK’s demand for hydrogen – which currently sits at around 700,000 tons per year – to double over the next decade, with a massive 20-fold increase expected by the middle of the century. Following Boris Johnson’s Ten Point Plan for a Green Industrial Revolution released in November 2020 and Scotland’s hydrogen strategy published in December, the roadmap outlines £961 million of funding for hydrogen-related projects. At least one third of this will go directly towards hydrogen production projects, with another third allocated for end-use applications in the industrial sector. Potential job creation could rise to 100,000 by 2050, with public investment hitting £13 billion.

Throughout the strategy, the government acknowledges that certain hydrogen applications will have to be prioritized, and its use will likely be limited by the available volume that can be produced. Decarbonizing existing applications in the chemicals industry will be given top priority in the short term.

By the mid-2020s, hydrogen will start to see application in decarbonizing heavy transport, including heavy goods vehicles, shipping, and aviation. Passenger vehicles have been excluded from the strategy, under the assumption that electric vehicles will continue to dominate that space.

Industrial processes in cement and steelmaking will see pilot projects for hydrogen to replace coal-based practices. It will also be used to provide long-duration storage for the electricity grid as it edges towards 100% renewable power at the end of the decade.

For domestic heating, where gas-fired boilers are being banned in the UK from 2025, the government has plans for hydrogen heating trials and consultation on “hydrogen-ready” boilers by 2026, suggesting that 45 TWh of low-carbon hydrogen could be used in the sector by 2035. To create a hydrogen market in the country, it will also examine blending up to 20% hydrogen into the gas network by late 2022 and aim to make a final decision in late 2023. 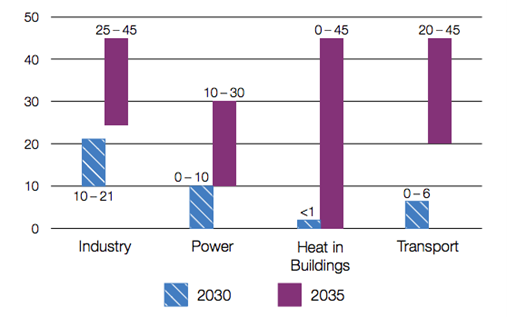 While concern was brewing due to delayed release of the UK’s roadmap, hydrogen is rapidly moving towards the center of the UK’s decarbonization plans. There were over 100 references to hydrogen-based technologies in the government’s Energy White Paper at the end of last year, while it also features in strategic documents for the future of industry and transport.

In the short term, and over the next decade, the UK wants to become a global leader in hydrogen. Unlike the approach from Germany, which also has a 5 GW production target for 2030, the UK’s focus will be on creating a domestic hydrogen market and value chain rather than on importing hydrogen from abroad. The strategy outlines the generation of around 9,000 jobs in the sector by 2030.

The UK’s plan is to develop a business model that will encourage private investment and solid revenue streams into the hydrogen sector – unlocking £4 billion of private capital by 2030. This model will be finalized in 2022, with the first contracts coming into play at the start of 2023, following a consultation that was launched alongside the main strategy.

It seems likely that this model will take a similar form to the Contract for Difference mechanism that has facilitated the boom in offshore wind in the UK. This would provide a guaranteed price per kilogram of hydrogen for project owners, with the UK government taking on the cost – or potential profit – due to any market fluctuations. This could be key to driving the cost reductions for low-carbon hydrogen and providing investment certainty behind the first wave of projects in the sector between now and 2026.

The UK’s 5 GW target for low carbon hydrogen production by 2030 was first outlined in Prime Minister Boris Johnson’s 10 Point Plan for the Green Industrial Revolution. This outlined a £240 million net-zero hydrogen fund, as well as a plan to create the country’s first town heated entirely by hydrogen by the end of the decade. It also called for a 20% blend of hydrogen to be injected into gas networks to reduce reliance on natural gas. Projects like Northern Gas’ H21 Leeds City Gate and Cadent’s HyDeploy are already making significant tracks toward making this possible on a wider scale.

Interim targets have also been announced for the country’s first ‘hydrogen neighborhood’ by 2023, and for 1 GW of electrolysis capacity to be installed by 2025.

However, the UK has less than 10 MW of electrolysis capacity currently in operation. Of the 700,000 tons of hydrogen produced per year, only 4% comes from electrolysis. The majority of the rest comes from steam methane reforming of natural gas (49%), as well as partial oil oxidation (29%) and coal gasification (18%).

The reason behind this is that low-carbon hydrogen production is still significantly more expensive than its fossil-fuel-heavy counterpart. Green hydrogen, which still lacks economies of scale, sits at a price of around £7 per kilogram, while grey hydrogen – produced through steam methane reforming – often sits below £2 per kilogram.

However, as electrolyzer production scales at the gigafactories of ITM Power and Nel, among others, capital costs for green hydrogen will start to fall. The operational costs of electrolysis plants will also fall as domestic capacity grows, and as the price of electricity – which accounts for around one-third of the cost of green hydrogen – continues to plummet.

The UK will also introduce its own ‘low-carbon’ standard for hydrogen in 2022, which is where it starts to diverge from much of the rest of Europe. The ‘low-carbon’ umbrella will not only include green hydrogen, but also ‘blue hydrogen,’ produced using steam methane reforming with carbon capture technologies.

While many of the UK’s early hydrogen projects, including flagship projects from the likes of Equinor, Shell and BP, intend to adopt blue hydrogen production, there is still a large amount of skepticism surrounding the elusive carbon capture technologies required to push the UK towards net zero.

Carbon capture, at many power generation facilities, has been unable to capture much more than 10% of the CO2 output for natural gas, and 100% capture rates are technically impossible for complex exhaust gases, and while it may be possible to collect a significantly higher portion of carbon from steam reforming, there is still the not too small matter of fugitive leakage. A report last week from the Universities of Stanford and Cornell pleaded for blue hydrogen to have “no role in a carbon-free future.” According to the study, blue hydrogen can actually be up to 20% worse for the planet than directly burning gas or coal to produce heat.

This is due to the lifecycle emissions and value chain of blue hydrogen, and the increased amount of natural gas that lies behind its production. Over 2.7 tons of natural gas are needed to produce each ton of hydrogen, and the escape of “fugitive methane” from wells and other equipment within its supply chain will have devastating consequences for the planet. Methane has an 84-times greater impact on the climate than CO2, over a 20-year period.

If you look at the companies pushing for blue hydrogen, it won’t take long before you realize what they have in common – a history in oil and gas. While forward-thinking utilities like Enel claim that any form of hydrogen other than green will be a trick, fossil-fuel majors are obsessed with prolonging their existing role in the energy mix. Their ability to convince politicians that this is an appropriate solution to climate change is worrying.

Across the rest of Europe, countries that have a less embedded history in oil and gas trading – including Germany – are placing their sole focus on green hydrogen. National commitments to electrolysis capacity are already creeping up to match the 40 GW target set by the EU last year, and it’s likely that this target – as well as the one from the UK, will have to be raised.

Even today, the UK’s pipeline of 4.06 GW of electrolyzer projects by 2030 is close to hitting the country’s 5 GW target. A recent All Party Parliamentary Group report called on the government to “expand beyond its existing commitments of 5GW production in the forthcoming hydrogen strategy,” pointing to a potential pipeline of over 15 GW of projects in the timeframe.