Hydrogen trains to emerge from 2022

Fuel cell trains could be an early indicator of how quickly hydrogen can penetrate Europe’s transport sector. With several pilot projects underway and a market of limited scale, the sector is likely to be the first to realize its full hydrogen potential.

In Europe’s green hydrogen strategy, which it released last week, trains were a brief mention: “Hydrogen fuel-cell trains, could be developed to other viable train commercial routes that are difficult or not cost-effective to electrify: about 46 % of the mainline network is still being served by diesel technology today. Certain fuel-cell hydrogen train applications (e.g. Multiple Units) can already be cost competitive with diesel today.”

This cost competition makes hydrogen an immediate zero-regret move in the railway sector’s move to reach net-zero emissions, as it aims to fill the gap between electrification and full decarbonization.

So far, the transformation in the sector has been heavily focused on electrifying routes of high utilization, including intracity routes. But the economics of this rely on this high level of traffic: it can often cost over €1 million to electrify each kilometer of a route.

The alternative so far has been to fall back on traditional methods of diesel-powered trains, contributing towards the 1.5% of CO2 emissions that rail accounts for within the EU’s transport sector. While electrification will continue to chip away at this from the bottom up, hydrogen fuel cells become a more feasible option on routes of over 100 kilometers, with low utilization (up to 10 trains per day) – referred to as ‘low density networks’ – especially in places where the cost of green hydrogen production and renewable electricity is low. 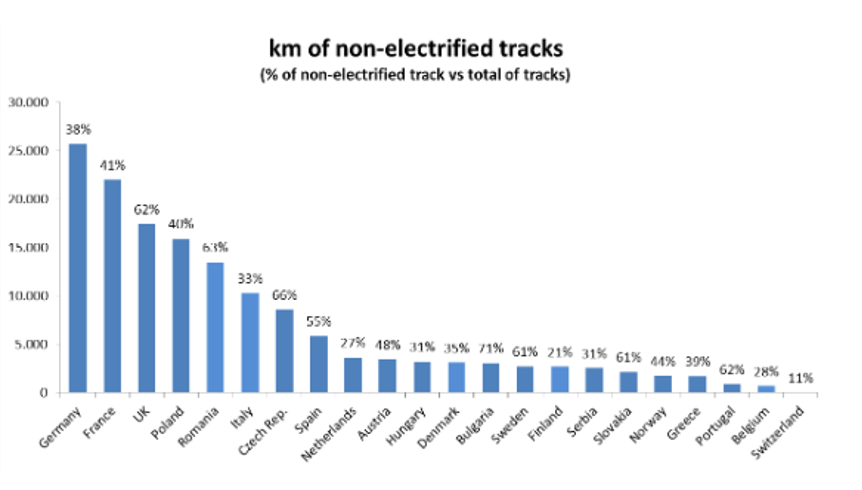 Fuel cell trains operate using a combination of technologies. In the Coradia iLint passenger model, both the fuel cells and hydrogen storage tanks are mounted on the roof of the train, while lithium-ion batteries are installed, with a range of auxiliary, traction and DC/DC converters, to improve efficiency through regenerative breaking. 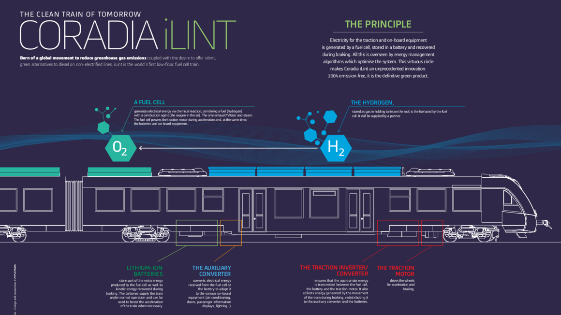 With all power generated without combustion, fuel-cell trains also offer a noise advantage in an era of increasingly strict regulations around noise pollution. Without the need for overhead cabling, networks also require significantly less disruption through development; bridges don’t need to be raised; network operations don’t have to be stopped through construction.

Since hydrogen is low density, rooftop storage is the only real option and range can be limited by the imposed space constraint, although not at a significant disadvantage against diesel power trains. There’s also the issue of hydrogen leakage, which would require monitoring stations to be placed at points on the network where hydrogen may get trapped.

The largest challenge for the uptake of fuel-cell trains, without doubt, is the total incurred cost, including that of the necessary refueling infrastructure (stations cost around €10 million). While the total cost of ownership of low-density networks can be lower for fuel cell trains than for those running on diesel, most case studies assessed by Shift2Rail highlight that hydrogen is usually at a 15% economic disadvantage.

However, with carbon pricing reaching record levels of €30 per ton this week, and likely to hit €100 by 2030, this advantage will not stand for long, especially if hydrogen is supported as strongly through buyer-side subsidies as the EU’s near-term strategy suggests.

Because of this, fuel cell trains will start to account for a greater and greater percentage of orders in the rail sector, with Shift2Rail indicating that sales could replace between 11% and 41% of diesel purchasing volumes by 2030, equating to between 546 and 1,753 standard units in that time.

With early momentum building, Rethink Energy anticipates that 1,713 fuel cell trains will be in operation across Europe by 2030, with further details to be given across the heavy-transport sector this August. This will be largely due to high penetration in multiple-unit passenger trains, as well as significant contributions from Shunters and Mainline locomotives. While pilot projects will continue to progress over the next few years, multiple-unit orders are not likely to enter commercial operation until 2022/23.

There’s also potential competition from alternative methods of clean rail transportation. Naturally electrification will continue to chip away at the high utilization end of the market: similarly, net-zero biofuels being developed by the likes of Inerterac could provide direct competition, especially if the resultant fuel can be used without any alterations to system hardware.

While batteries offer the same advantage, lithium-ion technology runs into the same challenges that it does in other heavy-transport sectors – power density and charge times – which limit the available range of a battery-powered train. Hydrogen trains currently offer ranges of up to 1,000 kilometers, battery trains can often only hit 60 kilometers off a single charge.

The technical specifications of hydrogen powered trains are often set up to match that of a diesel counterpart. The Coradia iLint therefore offers a speed of 140 km/h, a capacity of 300 passengers, while fuel consumption is in the region of 0.25 kg of hydrogen per kilometer.

In this case, the fuel cell capacity of the train comes from 2x 200 kW systems provided by Canada’s Hydrogenics, which was acquired by engine manufacturer Cummins in September last year. Hydrogenics currently occupies the lion’s share of the fuel-cell market in the rail sector, with Ballard offering the only significant competition – with its system used on several projects in China, the UK and Latvia.

Currently 20% of rail traffic is served by diesel technology, and over 40% of the Europe’s rail network. Only 2% of orders are from alternative technologies including fuel cells, although success was seen last year in the extended testing of Alstom’s two Coradia iLint projects in Germany, the Netherlands, and Austria, with new orders likely to follow.

Similar success has been seen through tests of Porterflex’s Hydroflex project in the UK, which aims to enter commercial operation by 2021. In total, Rethink Energy’s database amount to 17 projects: 6 in operation and 11 in development, across 11 countries.

The Community of European Railways and Infrastructure Companies was one of the key players calling for the EU to commit to its net-zero by 2050 target, with SNCF in France calling for this to be reached in 2035, despite a 20% increase in overall traffic by 2050. The UK has also pledged itself to eliminating all of its diesel trains by 2040. Germany has seen the most activity on a global scale: over the past 7 years, only 1 firm order has come outside of Germany – the Flirt H2 project in California.

Hyperloop technologies can now be tested – soon they will be here
Kuwait cancels 1.5 GW solar plant, but wants to bring it back at 2 GW