While the IEA has made headlines this week for calling Solar power the ‘new king of electricity,’ this should not be hailed as a revolutionary statement. Instead, the timing of this announcement, along with the rest of its World Energy Outlook for 2020, has reiterated just how significantly the organization is behind the times.

Admittedly, we’ve always been hypercritical of the IEA for underestimating renewables and overstating the role of fossil fuels in future energy scenarios. So naturally, with the WEO 2020 being announced this week, we were on our haunches to pick out some new form of ineptitude from an organization that is supposed to be leading the world through one of its largest economic challenges in shifting from fossil fuels to renewable energy.

Once again, we were not left empty-handed and the IEA has been reactionary rather than visionary. From the moment that Executive Fatih Birol took the podium for the announcement, the tone of the WEO was gloomy, with a very large focus on scars that Covid-19 will leave, denting our chances of decarbonizing societies and limiting climate change to irreversible levels.

It was also transparent how little the IEA’s primary focus has changed, since it was established to steer the world through the 1973 oil crisis. Of Birol’s four key conclusions that he highlighted, the first was that he “does not see clear signs of a global oil demand peak.’ Instead, the era of oil demand growth will come to end and within the next years, and that the dip in oil demand we’ve seen through Covid-19 will recover, along with the economy, by 2023.

Had the IEA been the only company to publish an outlook for global oil since the start of the pandemic, it could be assumed that this was a sensible forecast, based on a sad reality that behavioral change isn’t happening quickly enough. But this isn’t the case.

The players closest to the action – the oil majors – are contradicting this view, despite their vested interest in the survival of the oil industry. In BP’s Statistical Review of World Energy this year, it resigned itself to the fact that demand from the transport sector, which accounts for around 60% of today’s oil consumption, has already peaked: It’s glory days in fossil fuels are in the past.

BP’s report reveals that global oil demand will not recover to record levels of 100 million barrels per day seen last year, and that it could in fact fall by as much as 50% over the next 20 years, if stronger climate policies are implemented.

If you compare the two ‘business as usual’ outlooks from BP and the IEA, where it is assumed that the world will not adopt any new climate policies (which it obviously will), then it becomes obvious how entrenched the IEA is within the oil sector. Rather than expecting a peak in oil demand, the IEA expects it to flatline at around 104.1 million barrels per day through 2040. 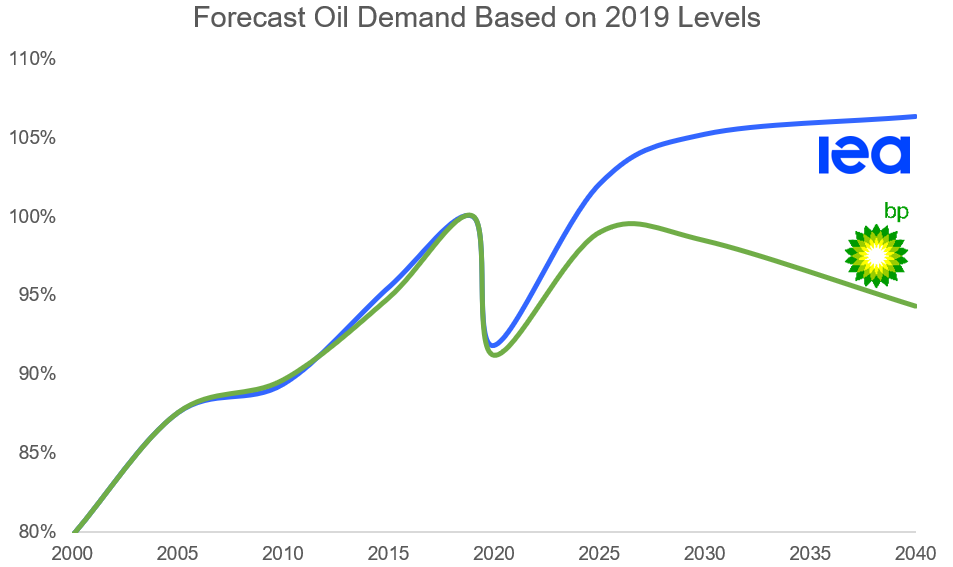 The difference between the two forecast lies in consumer behavior, and its likely that both have underestimated the demise of oil, with the IEA falling the furthest from the truth. Bizarrely, the IEA is more bullish on oil than the oil majors.

The IEA has cautioned that a shift from public to private transport, and a 7% reduction of vehicle turnover as a result of the pandemic will offset any efficiency improvements and shift towards remote working.

Birol also pointed to the fact that only 2.6% of car sales over the past year being those of electric vehicles, relating to a share of 1% of cars on roads across the globe. But as costs continue to fall, there is a momentum that the IEA has clearly overlooked in its prediction that only 140 million EVs will be in operation by 2030, rising to 330 million by 2040. This limited penetration “reinforces oil demand for cars plateauing in this decade at roughly 2019 levels of demand, before declining after 2030,” according to the IEA.

In leading markets like Europe, Electric vehicle sales are likely to have tripled through this year, reaching 10% of total auto sales in 2020 and 15% in 2021. Other markets won’t be far behind, and while the IEA’s 2030 figure may not fall dramatically short of reality, its 2040 figure will. As countries like Germany, France, the UK, Spain, Norway, the Netherlands, Portugal and Denmark have banned the sales of new ICE cars variously from between 2025 and 2040, the truth is that the global stock of EVs could accelerate to 563 million by 2040.

If you need any convincing that the IEA loves underpredicting clean technology, the solar sector is a prime example. If you’d followed the IEA’s prediction for solar power installations ten years ago, its forecast for annual additions of around 10 GW in 2019 were blown out of the water by a realized figure of 115 GW through the year. 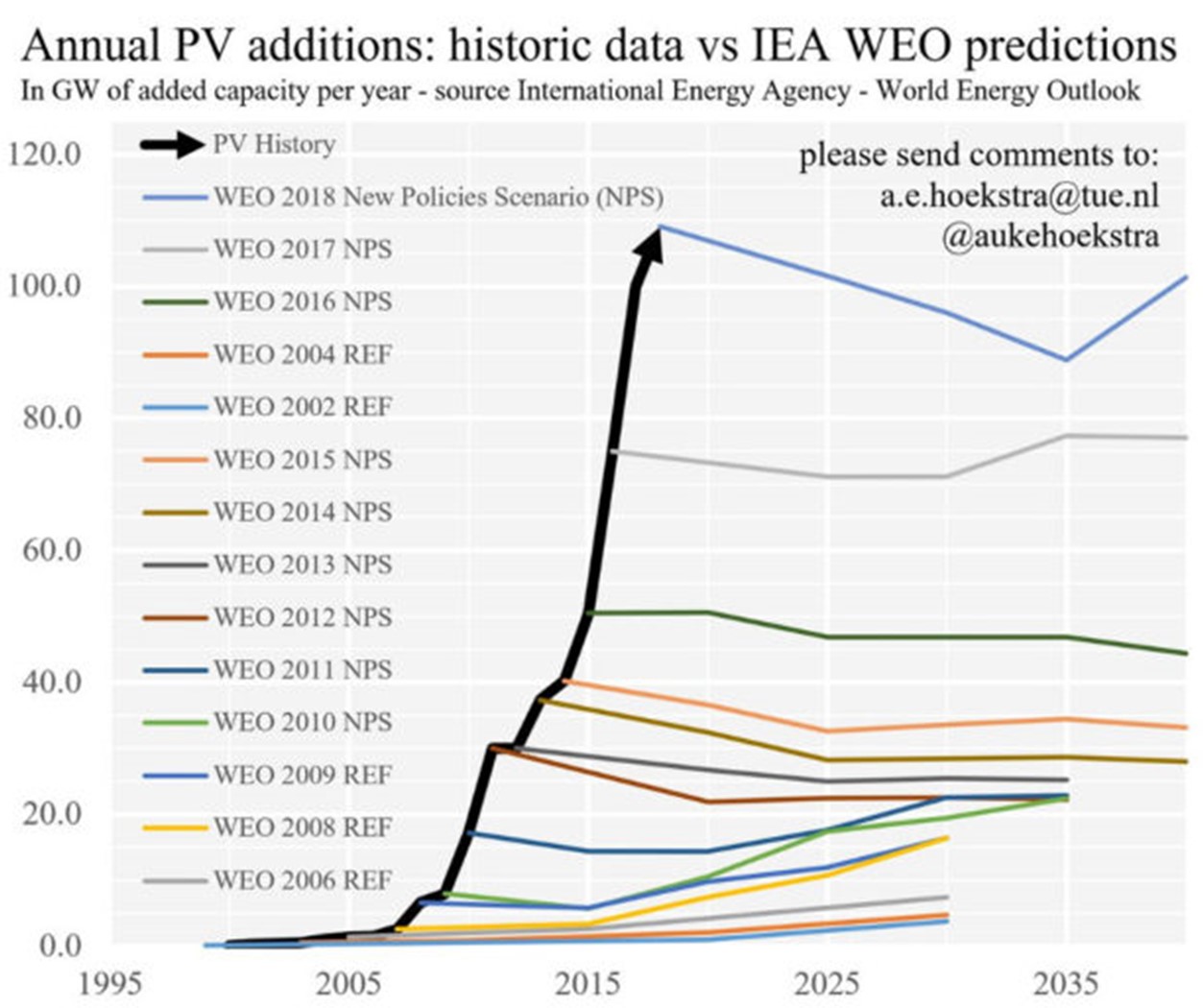 Maybe the IEA is trying to scare global politicians into action, by showing the consequences of inaction. But in reality, all this will do is deter investors from backing the right technologies. Last week, for example, the IEA stated that green hydrogen will only decarbonize 10% of the global steel industry by 2050 – which will be another massive underestimate.

This is in stark contrast to the “Growing momentum for carbon capture” that the IEA has been banging on about for years, stating that the technology will be essential to reach global emissions targets. The IEA has always been a huge proponent of the technology, including it as a key constituent in all-but-one of its pathways to net zero. In its first roadmap in 2009 it predicted 22 GW of projects in operation by 2020, but less than 0.5 GW has actually made it into existence.

If you now look at the oil majors, while companies like BP, Shell and Total are focusing on a transition from ‘Integrated Oil Companies’ to ‘Integrated Energy Companies,’ the IEA has fallen on the side of the ‘bad guys’ like Chevron, ConocoPhillips and ExxonMobil in the US, who are hellbent on a future in oil, using carbon capture as an excuse to carry on with business as usual.