India’s solar demand not yet met by domestic production

India’s deployment of solar capacity is grinding to a halt as new production is not yet online at scale to meet demand, stockpiled Chinese goods from before April 1st 2022 have mostly been used, and some of India’s module output is being exported to the US. 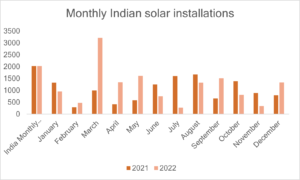 India installed 13.9 GW in 2022, up 17.5% year-on-year, which is half the global growth rate of the solar industry. The 2022 figure, though it is a record, is also not enough to meet the targets set by the Indian governments, and it’s growth on a small base considering the scale of the Indian economy and power sector. If anything Indian solar ought to be growing much faster than the global average, which was 35.6% in 2022. And even this mediocre performance could be about to fall off a cliff according to the complaints voiced by various industry figures.

Ten months ago we reported that 8 GW was imported by India from China in Q1 2022 but that 15 GW of projects were at risk of being unable to affordably source modules, and in September we mentioned rumours that the government would suspend or grant further exemptions to the customs duties on Chinese modules. So far there have been some exemptions, but for a narrowly defined number of projects whose development began before the implementation of the Basic Customers Duty (BCD), with only a few hundred MW of modules imported this way.

Last week we mentioned Parag Sharma, CEO of project developer 02 Power had made pessimistic comments on the issue. He asserted that there had been “no procurement” of solar modules since the April 1st Basic Customs Duty implementation, called for delaying the implementation of the Approved List of Models and Manufacturers, and predicted a collapse of deployment figures in Q1 2023. His words were undercut a little by the surprising 1.3 GW installed in December – expectations were for less than the 342 MW in December, so it may only be monthly variation.

Another industry figure, Sandesh Shetty of manufacturer Waaree Group, admitted that the situation was harsh for developers and that cell dependency “would continue for some time.”

India’s government once had a target of 100 GW solar to be installed for March 2023. Instead it has 63 GW, and even if the next few months are good, it will still only reach 65 GW by then. Its overall renewable target for 2022 was 175 GW, over which it has 122 GW, both excluding large hydro.

In the middle of 2022 we contrasted India’s solar protectionist and manufacturing efforts favorably with those of the Biden Administration. Both countries interfered with Chinese imports at the same time, India with a deliberate 25% cell, 40% module custom duty brought into force from April, the US with the surprising Department of Commerce AD-CVD investigation. The difference was that India had already begun subsidizing manufacturing efforts under its Production Linked Incentive (PLI) scheme, whose second tranche assigned $2.4 billion in government funds, enough to build around 10 GW verticalized, and much more – the government target of 65 GW mostly verticalized is credible – when accounting for private investment alongside.

Now the comparison may have flipped to be favorable to the US, even though its 2022 installations were down 23% or so. India’s Basic Customs Duty is stricter than the US’ trade barriers right now, given President Biden’s tariff moratorium on South-East Asian product, and the likelihood that the Department of Commerce’s final decision will only disallow a large fraction of that region’s exports to the US, by defining some as substantively Chinese.

An ironic factor to consider is India’s exports of modules to the US, which is up six times from Q2 to $157 million in Q3, which would be around 600 MW in one quarter.

The US expects to take a few years to develop each segment of its supply chain sequentially, first modules then cells then wafers and then finally some new polysilicon. In contrast India has acted as if it expected the buildout to be far swifter, or as if it’s fine with sacrificing development for a year or two in order to maintain protections for domestic manufacturers as they get up to speed. The Approved List of Models and Manufacturers (ALMM), which accepts only domestic modules, is required for most types of solar installations across India, with rooftop not granted an exemption as some anticipated.

The question then is how big India’s manufacturing efforts have gotten – where are they right now. Polysilicon isn’t yet in evidence, but it doesn’t have to be as there’s no trade barrier on that yet and China is building more than enough production capacity for the world. For wafers much the same can be said. For cells, India faces the problem that it’s at a technological lag compared to China, just as it was in the 2010s when it last built out a solar manufacturing industry. This time it’s making PERC production lines, mostly, instead of heterojunction and TOPCon, and Western involvement doesn’t completely solve the issue. Perhaps India will go half-and-half on domestic and imported cells. The import duty of 25% is considerable, but cell prices have fallen by more that amount in the past month as China’s production capacity expands. For modules India should certainly be able to provide for itself.

To provide some numbers to this topic – Waaree recently announced that it has commissioned 9 GW of module production capacity, making it the leader in India with 12 GW and currently 17% market share according to local research analyst JMK. It’s also the only domestic producer of 650 Watt panels, although these are Mono PERC, with TOPCon and heterojunction being specific as the topic of future efforts by the company. Waaree’s chairman and MD, Hitesh Doshi, has stated that the country now has 30 GW of module production capacity, and can reach 100 GW. But as for cells, Waaree will reach 5.4 GW only in September with the opening of a new factory.

A past estimate by JMK Research stated that cell production capacity would reach 18 GW by the end of 2023, which would imply around 10 GW built this year – so this supply disruption may well end in 2024, even assuming it is quite severe in 2023 for Indian developers.