Interconnection queues hold clues to decarbonizing the US

Browsing through all of the interconnection queues in the various Independent System Operators in the US, is something you have to do if you want to do any kind of forecasting for US electricity generation trends.

So it comes as absolutely no surprise to us that a group of researchers led by Joseph Rand and Ryan Wiser, at the Lawrence Berkeley National Laboratory has quantified all of those job queues – which represent something approaching 8,100 lines on complex spreadsheets, and have drawn some conclusions from them. This is where future US electricity will come from in the near term.

The big conclusion is that within the past two years energy storage is the biggest gaining technology by some margin, as evidenced by the graphic below. Solar and storage (all forms of storage, but most of it lithium ion), show sudden and dramatic growth from 2020 in particular. Solar represents 65% of all new generation. 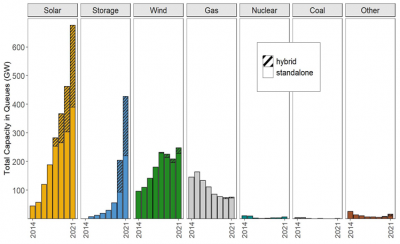 It is important that you understand that the ISO and RTO transmission queues are precisely that, job queues getting closer and closer to fruition, and the bulk of them are orders made more than 3.5 years in advance. If you want to get a renewable or any other type of project going in the US you have to pay a fee, and request that your project is connected to the grid and you are given a position in that queue and a cost of connection.

Under the right circumstances that position in the queue, as it gets closer CAN be traded with other energy entities, so it might start out as a solar connection and end up as a solar plus battery connection owned by someone else. But if you don’t have a final investment decision prior to your connection work beginning, most developers simply let their request slide and cancel it and the connection is never built. But about 23% of those projects in the queue get built, slightly less for renewables and the process goes through multiple stages –  not yet started, in progress, an interconnection agreement has been signed, or the actual construction has begun. So looking at the queues gives a hint of what may happen, but it cannot be guaranteed.

Here is another graphic from the report showing that many of these planned developments are hybrids, well over 300 GW of them, with the most frequent occurrence being the Solar + Storage type which we4 have anecdotally been told are standard fare in California now. 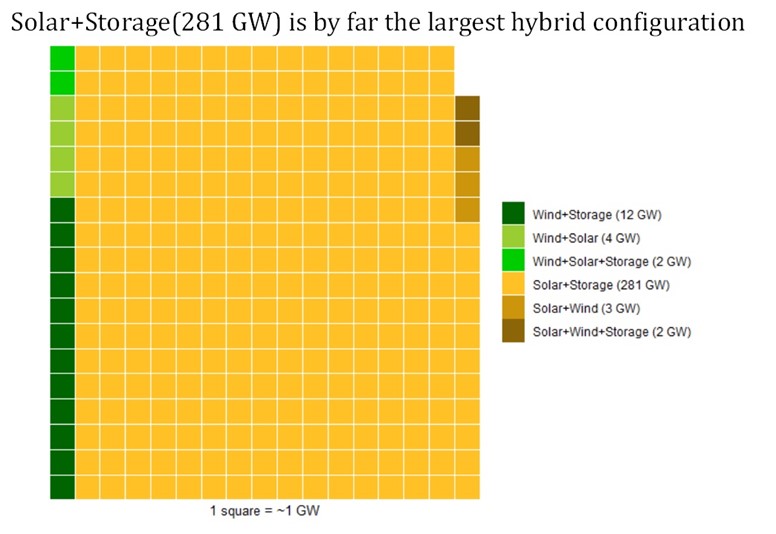 The total value of fresh electricity capacity in the queues has reached 1,400 GW of generation and storage with over 90% of that for zero-carbon resources like solar, wind, and battery. The lab said that this is across 85% of the total US electricity load.

On the other hand fossil fuel proposals are down to just 75 GW of natural gas and under 1 GW of coal. In the past 4 years it has been common or utilities to try to pass coal and gas projects, but in the end utility commissions have been adamant in not letting many complete the development process and have diverted them onto renewables. 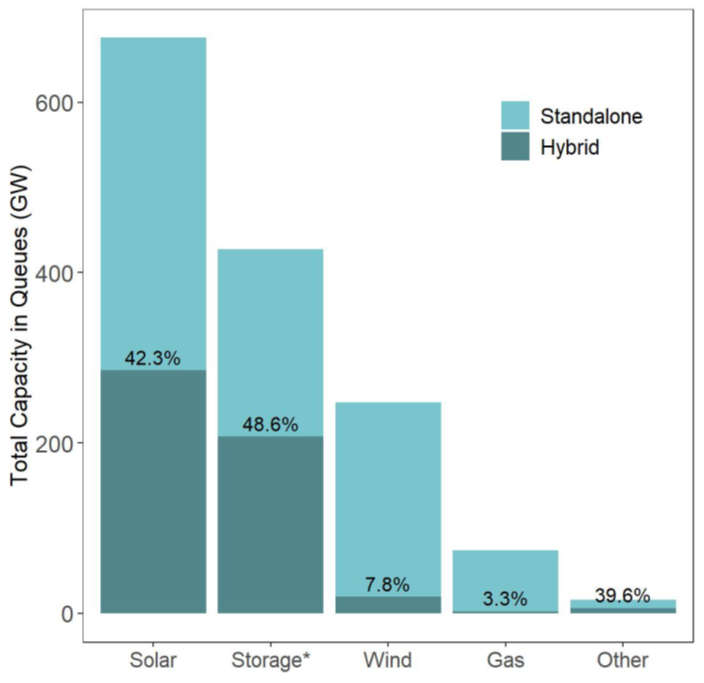 We get another take on the hybrid nature of projects in the pipeline in this graph showing that solar is 42.3% envisaged as hybrids, and storage is almost half. While we at Rethink Energy have always anticipated battery being used to flatten out the intermittency in wind, the fit with solar is so great, that wind can rely on battery which is installed with solar and whenever it finds it is selling below a particular price, can instead sell it to a battery owner – the wind farm may not need to own the battery storage in order to use it, it ends up as an arms-length transaction in an arbitrage play. It is no surprise that in CAISO the Californian ISO, there are an increasing concentration of hybrids.

But the heavy concentration of solar projects involved in the interconnection queues shows how critical solar will become to the US grid, and failure to resolve the US dilemma of whether to treat Chinese solar panels as a threat to US solar manufacturing, rather than a convenient source of cheap raw materials for a rampant energy industry, will be critical in deciding whether or not this much solar + storage can indeed be built in time.

While all forms of storage were included in this report including lithium ion, pumped hydro, compressed air, gravity rail, and fuel cell, about 98% of it was chemical battery based, almost entirely lithium ion.

This queue can give an idea of what may get installed in the US over the coming 3.5 years with 73% (998 GW) of capacity in queues with a proposed online date before the end of 2024. If it was all built then some 300 GW a year would be added to the US grid, and at the prevailing 23% rate that represents 62 GW per annum – although solar and wind developments enjoy more like 20% and 16% completion rates, so it would be somewhat less than that. Either way it works out more than the cumulative 138 GW of additional capacity Rethink Energy has forecast for the USA to add in that time, including coal, gas and nuclear closures.

These queues are only indicators of what’s in the pipeline for the next 3.5 years, but if that behaves as expected, the US will remain on track to decarbonize on schedule, but with many more years to go.