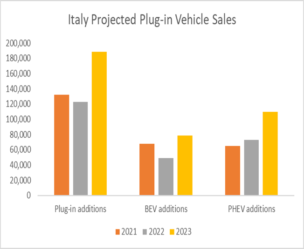 July figures show battery electric vehicle (BEV) purchases have increased in 4 out of 5 of the EU’s largest car markets, but Italy in particular is still resisting adoption.

Total new passenger car registrations fell throughout the year across Europe, accumulating between 11% and 20% reductions when compared with last year – itself a fraction of the shipments in 2019 – the last “normal” year.

A majority of this shortfall consisted of the continued decline in the number of petrol and diesel passenger cars purchased. In the UK alone, the drop in diesel purchases was 49% compared with 2021 – but in most of the major markets – Germany, France, Spain and the UK – electric vehicles are still on the rise – but Italy has just gone backwards.

Italy experienced a 30% fall in petrol and diesel registrations, but also a nearly 20% reduction in the numbers of plug in vehicles (BEVs) registered relative to 2021. This fall matches the proportional drop in total vehicle sales within the country. So why are EV sales not resilient in Italy?

Rethink does not believe that sentiment towards BEVs has necessarily changed in Italy, and can only attribute the situation to a complete freezing of car sales due to recession.

Italy’s lethargy in shifting away from petrol towards electricity can be seen further in the popularity of the country’s Autogas market – which is effectively a common name for liquid petroleum gas (LPG). Within Europe, Italy and Poland are virtually the only major markets for Autogas in passenger vehicles. Italy shows no change in buyer’s sentiment for Autogas despite the significant emissions of Autogas compared to EVs.

Autogas produces 70% of the CO2 emissions that petrol does and around 50% of the NOx emissions. While that’s some improvement, it will be insufficient going forwards as those country’s neighbors will fully decarbonize their transport industries and potentially not allow such cars to travel there.

At Rethink we have witnessed that Italy’s transition to Plug-in electric vehicles was slow to start, and was only triggered when one of the favorite brands (Fiat) came out with its tiny 500e, one of the most popular cars across Europe since its launch. Fiat was slow to follow market signals into electric vehicles prior to this, but now this impact seems to have slowed.

If Italy is to begin catching up to the rest of Europe and hit between 15% and 25% plug-in sales, a major volume increase will need to be seen. Assuming 2023 sees a marginal increase to new vehicle registrations this would mean plugin volumes will have to rise to around 190,000, an increase of around 55%.

Elsewhere in Europe, the UK leads the pack on plug-in vehicle adoption with a 20% increase in the number of plugins registered year to date, totaling 185,288 vehicles registered. This was primarily driven by an increase of 42,460 BEV sales bringing year to date sales to 127,492, an increase of close to 50%. It seems the more sophisticated a market gets in EVs, the more the market shifts to BEVs, rather than pug-in hybrids.

Overall, the European passenger car market is continuing to weaken as 2021’s recovery runs out of steam. External factors like the war in Ukraine driving up the price of oil and consequently fuel, have continued to hammer overall demand just as the market was beginning to recover from the effects of Covid-19. Though it likely contributed to increased BEV and PHEV demand as people recoiled at the price of petrol and diesel.

As we come out of the summer oil price peak, demand may rebound slightly in Q3, but companies should not take that as a sign of continuous recovery as yet more economic headwinds approach with winter coming.

Inflation is expected to soar across much of Europe, with projections as high as 13% as of the time of writing. This is primarily due to natural gas and energy prices.

Falling consumer spending power tends to weaken demand for passenger vehicle sales due to the highly cyclical nature of the market, as people save money to use on absolute necessities, shifting demand to the used car market or out of the automotive industry altogether.

Sales of petrol and diesel vehicles are giving the impression that even going into an economic recovery their gains won’t significantly materialize as we get nearer to new registration number deadlines for the sale of these fuel types and recovery isn’t yet on the horizon.

As faster charging and range improvements become more widespread across Europe, worries surrounding range anxiety and charging speed should be addressed within the next few years. Though different countries will be quicker to accept this than others.

The main problem facing BEVs will continue to be high entry prices which are contingent on Li-ion battery production. As battery prices fall, the capital cost of these cars will also fall.

Demand is going to have to continue waiting until Li-ion battery production properly scales leading to cost reductions on finished vehicles, or when a viable secondhand market emerges for electric vehicles to serve the budget side of the market. It has not helped that European governments have looked for savings across the board as recession arrives and many have withdrawn plug-in subsidies.

Battery production is being ramped everywhere in the world which should lead to lower costs, since this would spur the creation of a used market, lowering barriers to the EV market.