Jinko maintains its PV edge, among the Chinese giants of solar 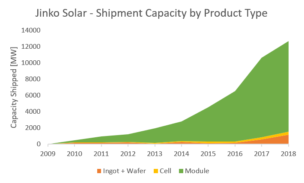 This series of articles aims to identify and examine leading players in the market and provide key, impartial insight into how their positions are likely to develop as demand for solar panels increases. We begin the series with an exploration of Jinko Solar.

Jinko Solar has most recently made headlines due to its dealings with Hanwha Q-Cells in US court, where Jinko, along with REC and Longi solar were accused of violating patents. Jinko Solar remains confident that the summary determination will rule in its favor, but this is an early sign of friction as international manufacturers try to strengthen their footholds in the US solar market.

Jinko Solar was recently announced as a China National Manufacturing Champion, describing itself as “one of the largest and most innovative solar module manufacturers in the world,” with the mission to “provide a one stop solution for clean energy and become industry leader.”

Established in 2006, Jinko Solar started with a focus on ingot manufacturing for monocrystalline solar panels, with an efficiency of around 16.5%. Progressively, the focus of the company shifted to wafer manufacture and more recently to modules, which is now its primary source of revenue.

With headquarters in Shanghai, China, Jinko operates as a vertically integrated company from 6 production facilities, 21 warehouses and with numerous international sales teams, and an employee base of 12,000.

This infrastructure has supported the development of projects within countries including China, US, Japan, Germany, UK, Chile, South Africa, India, Mexico, Brazil, UAE, Italy, Spain, France, Belgium, among others.

Today its shipments are 1.17 GW of wafers, 365 MW of cells and 11.2 GW of modules and this is close to being a full order book. Next year it is targeting an expansion to 20 GW of total production.

Revenue has risen in line with this, up 5-fold since 2010. Jinko Solar claims its place as the largest solar manufacturer in terms of global shipment, with a 12.8% market share in 2018.

In terms of commercially available technology, efficiencies in Jinko’s monocrystalline panels have risen from 16.5% in 2009 to 21.7% today, with polycrystalline rising from 15% to 18.8% in the same timeframe. Through research and development, Jinko has claimed world records in cell efficiency across three categories of: P-type mono cell; N-type poly cell; and N-type mono cell, the latter of which clocks in at the highest efficiency of 24.2%.

Among the seven utility scale projects where Jinko’s technology has been used is the world’s largest PV plant in Abu Dhabi, UAE, where 1.18 GW of ground mounted capacity was installed in April 2019, as part of a project with an LCOE of $29.4 per MWh.

Jinko’s technology is separated into seven commercially available solar modules. These primarily focus on monocrystalline silicon, with polycrystalline solutions taking a backseat in the past few years across the industry. Operational efficiencies in the products vary between 17.41% and 20.80%, with each model available in 60-cell or 72-cell form. All but one of the models uses aluminum busbars to improve efficiency, with most using an ‘advanced glass and cell’ surface.

The latest edition to the series is the Swan model, as a bifacial alternative using the company’s Cheetah cells, increasing module power by 5% to 30% depending on reflection, lowering LCOE of the modules themselves to approximately $0.034 per kWh and IRR. The Swan Plus module can achieve a power output of 460W per panel.

This new focus on bifacial follows the trend in the market. Approximately 10% of module shipment was attributed to bifacial technology at Jinko Solar this year. In spite of the bifacial exception from US trade tariffs coming to an end, Jinko still expects this to grow – estimating the figure to be around the 30% mark by 2023.

Jinko’s technology puts it as one of four suppliers with an ‘AA-Rated’ bankability status – along with First, LONGi and Canadian Solar. Of these Jinko is the only PV module supplier to have been in this top-class bracket for the past 12 consecutive quarters, although unlike First Solar, it has never leapt into the ‘AAA’ category.

While Jinko holds its primary point of differentiation in its high conversion efficiency, it also has an exclusive partnership with DuPont for its Tedlar transparent backsheets. Using polyvinyl fluoride (a non-glass alternative), the technology allows bifacial technology to operate in a durable way with reduced losses to reflection due to its high flexibility and strong aging properties.

As a leading manufacturer in terms of capacity, we would expect Jinko solar to continue pushing boundaries in efficiency innovation and attempting to reduce the LCOE of its products through a Chinese-heavy supply chain. Advances in module weight are therefore also likely, and key to further reducing the Capex costs of its associated solar projects. As the market booms, this will likely see Jinko acquire PV innovators, but not those developing tracking or floating subsystems. With these, Jinko Solar is more likely to attempt to make exclusive partnerships as it grows its presence in the floating solar market; a deal currently looks on the cards with the UK’s Aten Group, for a 42 MW floating project in Jamaica.

While it may offer some assistance to developers and EPCs through the production of solar farms, it will feel more comfortable in keeping its primary focus on the bare-bone PV technology. However, especially as floating solar begins to emerge, the company will have to increase communication with engineering companies to ensure the ease of integration of its products in more bespoke-style projects, including floating and tracking.

We would expect that Jinko Solar will hold its position as a market leading manufacturer in terms of product shipments, keeping its market profile consistent while solar orders continue to rise. In the absence of excess stock within major players, the industry is more focused on growing production capacity rather than hunting for orders. Due to the nature of scaling this up, Jinko Solar’s percentage market share will be chipped away to around 11.2% next year, but will most likely stay in the region of around 5 GW ahead of its main rivals over the next few years.

The biggest threat will come if sudden innovation takes place or is adopted by a competitive rival. TZS’s new stake in SunPower spin-off Maxeon will be worth a watch as it scales beyond the residential market into the 2020s. With efficiencies in PV solar looking at a 29% physical limit, methods of expanding the acceptable wavelengths of light absorbed by solar modules is likely to be a primary focus, with carbon nanotube technology, which converts heat into light to be absorbed by the PV effect, currently showing signs of promise.