Solar will be paired with small-scale hydrogen storage as part of a new project being developed by Sungrow and ‘hydrogen battery’ company Lavo, as part of a deal signed last month. Having previously pinned its hopes on the residential market, this adds to the string of signals that hydrogen may not be set for decentralization to the same extent as batteries.

Lavo and Sungrow will develop a series of 5 MW solar farms in the Australian state of Victoria. Sungrow will provide its inverters to the project, as well as its new liquid-cooled PowerTitan energy storage system to build a total of 176 MWh of DC coupled systems along with Lavo’s hybrid hydrogen batteries. Installations are expected to be complete by the end of the year, with the solar panels already in operation.

The company has previously said it hopes to also install its hydrogen battery solutions at the solar farms dotted across regional Victoria and NSW, having signed a $33 million project financing agreement with the Commonwealth Bank to do so.

Lavo’s technology, in its own words, “acts as a solar sponge. The system, which is not dissimilar in external form to a Tesla Powerwall, aggregates several technologies that regular Rethink Energy readers will be familiar with. Along with a standard lithium-ion battery and converter, it houses an electrolyzer, hydrogen storage device, and fuel cell, allowing for a full spectrum of decentralized energy storage and management. It also includes a water purifier to ensure that electrolysis can occur efficiently, and a hybrid inverter to manage the power distribution between the battery and electrolyzer units. 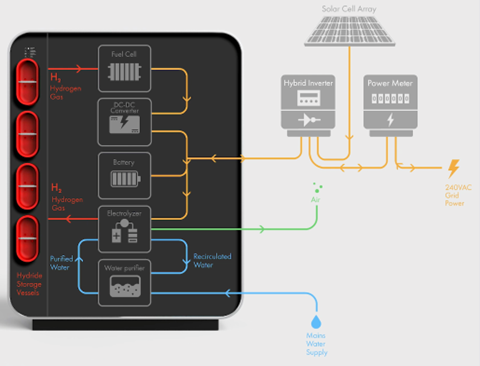 Most of its IP, though, sits within its patented metal hydride storage medium, which stores and regulates hydrogen at a pressure of 30 bar, and allows up to 20,000 charge/discharge cycles.

Combined with the battery, the system has a usable storage capacity of 40 kWh – enough to power the average Australian home for more than two days without any additional solar input. According to Rethink Energy’s modelling, such a system, paired with 30 kW of solar, could keep these homes grid independent for more than 99% of all days.

With retail power prices facing their fastest inflation in living memory, the business case for rooftop solar-plus-storage systems is getting stronger by the day. While capital investments of more than $20,000 are often required, the LCOE from home systems now undercuts retail prices so much that the payback period, in several markets, sits well within what is accepted by consumers for home improvements.

The other trend that matches this desire for grid independence is the scaling of home battery storage offerings on the market. While early models sat at around 6 kWh, US company Generac now offers a modular system of up to 36 kWh capacity, while company’s like EnerVenue are harnessing alternative chemistries with low maintenance and high safety, meaning that it can cram as much battery as needed into the disused space in any given home.

The question for Lavo’s technology, however, is whether or not the hydrogen is actually needed. Converting solar power into hydrogen and back into electricity has a round trip efficiency of below 50%, while simple charge/discharge cycles of battery are often above 85%.

One point of differentiation sits within the potential to use hydrogen in future home appliances in both cooking and heating. This application is currently being debated heavily in the hydrogen sector. A piece in Recharge this week highlighted 18 independent studies that have “ruled out” the use of hydrogen in the heating of buildings due to the costs and inefficiencies involved.

Hydrogen is barely used for home heating in today’s energy mix, although several programs are at pilot stage worldwide. In Japan, around 350,000 heat-and-power cogenerating, hydrogen-ready fuel cells have been installed, while the ene.field demonstration in Europe saw more than 1,000 units installed across ten different countries. Most recently, the Hy4Heat project in the UK claims to have demonstrated that it is technically possible to switch gas for hydrogen in the home.

The key issue for hydrogen in heating is its efficiency and cost. Hydrogen has 3.4 times less calorific heating value per cubic meter than methane, meaning that 3.4 times as much H2 is needed to produce the same amount of heat as natural gas. The fact that hydrogen is a smaller molecule also means that 22% more energy is needed to pump hydrogen around the network, and roundtrip efficiencies are estimated at just 46%.

Natural gas has traded at an average of $3.06 per million Btu over the past 10 years. Achieving cost parity with this will require the cost of hydrogen to fall below $0.35 per kilogram. While costs may fall that far in a 2050 timeframe, the ‘green premium’ of hydrogen may be beyond what consumers are happy to pay. Government subsidies will be needed. To this end, electric heat pumps provide a far more efficient switch to net zero heating. For instance, PV-powered heat pumps require 5-6 times less electricity than a boiler running on hydrogen produced through electricity.

These electrified solutions, however, do not come without their own limitations. While they are an obvious solution for new builds in dry environments, replacing a gas-based system, with a wall-mounted heat pump can be both expensive and disruptive to building occupants. Air-sourced heat pumps can also occupy a significantly larger space than their gas-based counterparts, while ground-source heat pumps are very dependent on local geology.

While the quoted figure for coefficient of performance – the metric for measuring the heat power output per unit of input electrical power – is normally between 3 and 4, environmental factors can limit this significantly. In damp and cold regions – like Scotland during winter, for example – the realized figure can be much closer to 0.8, meaning that heat-pumps all but lose their advantage over hydrogen-based systems.

In specific cases like this, hydrogen also offers a more seamless transition to decarbonized heating, especially when retrofitting systems to existing buildings where gas infrastructure already exists. Rethink Energy believes that green hydrogen will be responsible for 8.1% of home heating by 2035, before rising to 28.1% by 2050 as the global hydrogen economy is realized.

Lavo’s role in this is uncertain, especially given that it is a behind-the-meter offering. While it is exactly the kind of Gigafactory-ready technology that we love at Rethink Energy, the boom in home energy solutions through the coming few years will mean that hydrogen – and by association Lavo – will be too late to the party.

That being said, the flexibility in being able to offer hydrogen or electricity on demand does have a strong offering for those in industry who will have a need for both. In this regard, Lavo’s pivot to MW-scale plants, which are often paired with such facilities through PPAs, is a sensible one.