This year we’ve covered the increasing cost of building solar power frequently: first it was the polysilicon shortage, then the general rise in costs ranging from silver paste to freight, and most recently China’s power cuts.

But with new reports on LCOE put out by NREL, IHS Markit and others, now is a good time to take a step back from those temporary disruptions and remind ourselves that the fundamentals for solar power, still a relatively new technology, are constantly improving.

NREL’s latest report covers up to Q1 2021, with a comparison to 2020 figures, so the examined period experienced only the beginning of the freight, polysilicon and other disruptions. Moreover, the report used a bottom-up benchmark cost system which explicitly excluded pandemic effects – “Benchmarks also assume a business environment without any impact from the novel coronavirus pandemic“. That omission is useful for our purposes; by looking at the last figures from before the present disruptions, we can imagine what the first figures to come after these disruptions will look like. 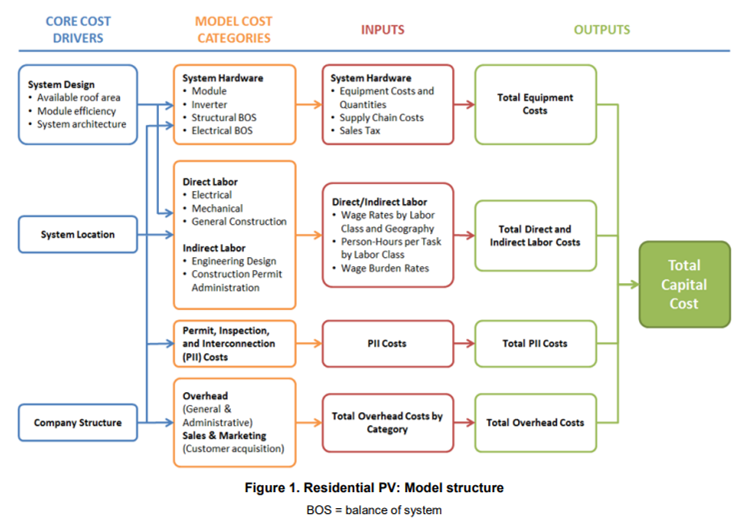 What NREL found was not a perfectly sunny picture: Balance of Systems (BoS) costs, i.e. all the non-module physical equipment costs, remained the same or even rose, leaving it up to module cost declines to produce an LCOE improvement. Because the miscellaneous costs of grid connection and bureaucracy are far lower per Watt for larger projects, module costs are quite insignificant already for residential installations – especially in the US with its regulatory situation. So with LCOE declines depending only on module cost reductions, that’s why residential PV fell a mere 3% while commercial and utility-scale fell by over 10% each. 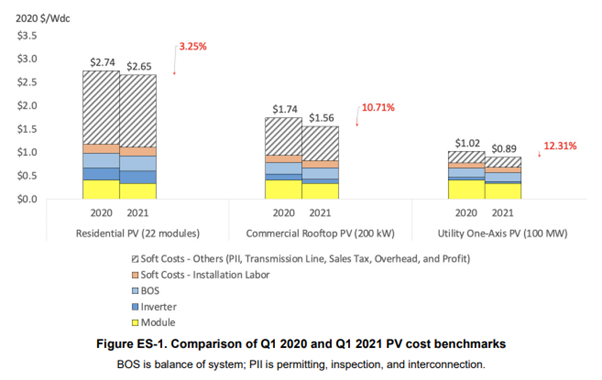 Incidentally, the NREL report also found a steep 10% decline in Battery Energy Storage (BESS) project LCOS – a stark contrast to Lazard’s recent report which went past Q1 2021 and was empirical rather than being bottom-up with exclusion of pandemic effects; the Lazard LCOS numbers found stagnation as described here.

Comparing PV Infolink’s spot pricing for today compared to a year ago, module prices are up by 17.6% year-on-year within China – and outside of China, the increase has been more severe, around 20% or more, as freight costs increased especially steeply. Indian module manufacturers – who still depend on imported Chinese components for now – similarly expect another 4 to 5 months of price increases, according to MERCOM India; ZnShine’s Regional Sales Director, Bharat Makkapati, expects module prices to remain in the $0.28 to $0.32 per Watt range “for the next two upcoming quarters”.

To take a look at when solar module prices will come out of their current high levels, first let’s restate all the things that pushed prices up, then gauge the timeframe for those temporary problems to subside.

Firstly the history of the polysilicon shortage can be described in some detail referencing  the below graph from Bernreuter Research. On a longer-term basis, polysilicon factories take longer to build than cell, module, or wafer facilities, and capacity expansion was neglected when prices were low. This resulted in a cyclical investment mismatch with the rest of the supply chain outgrowing the upstream polysilicon link.

There’s now 1,800,000 tons of polysilicon factory capacity planned in China, which is three times the current global capacity, so perhaps in a few years’ time the polysilicon makers will be back to very tight margins as in 2020 – if global solar demand isn’t similarly monumental which it probably will be.

The mismatch became apparent very suddenly during 2021, because 2020 demand for solar was depressed by pandemic lockdowns and much of that demand was simply shunted into 2021, itself a strong year.

The first plateau on the graph, from June to October, came when downstream manufacturers began cutting the scale of their purchases – refusing to pay more. This came shortly after the SNEC exhibition in Shanghai so it was most likely coordinated. 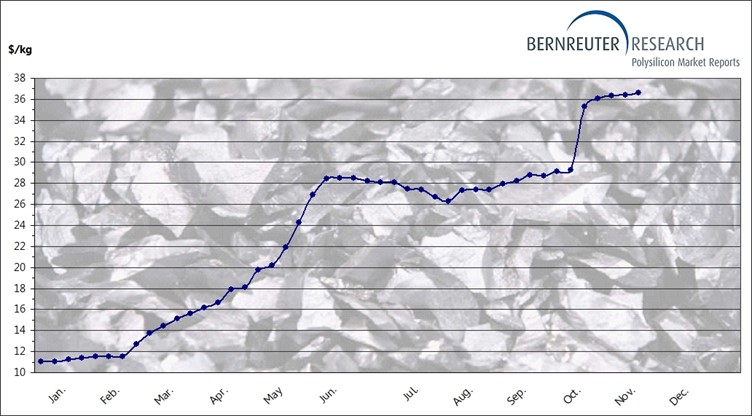 The October cliff is from China’s power cuts from the coal shortage – and from its CO2 emissions control regulations in some cases, as the oldest and dirtiest coal plants revved back up briefly. The power cuts have significantly eased already, becoming a threat only to certain provinces as they head for a cold winter and as China expands its coal and gas supply lines to replenish its stores. But even if the power supply issue went away immediately – without the 20% increase to the cost of electricity which has been permitted by authorities – the absence of the polysilicon not made in October would still be felt.

“Orderly Use Control” orders fell most heavily on the power consumption of energy-intensive industries, which was polysilicon, but also other elements of the solar supply chain, such as EVA backsheets and aluminum frames. Glass has experienced two price spikes and copper has also fluctuated, as depicted in Rystad’s recent prediction that 50 GW out of 90 GW utility-scale projects worldwide could be delayed by cost increases. 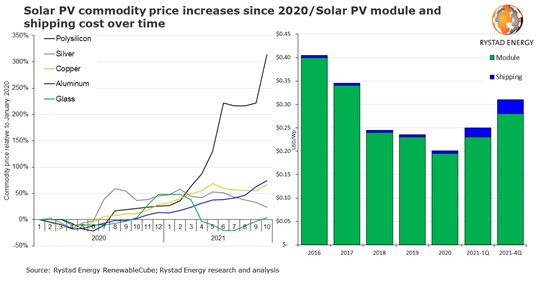 So that covers most of the solar-specific cost increases: some cost increases such as freight may just as well incentivize investment into renewables as punish it, given that just about everything is more expensive. Official predictions have 2022 inflation falling compared to 2021, but that’s outside our purview.

The lifespans of these three cost increases – polysilicon shortage, China power cuts, and general inflation including freight – are all indeterminate, but most likely these will have already eased substantially by the middle of 2022 and some will be effectively gone by 2023. One of the more enduring obstacle will be freight costs, which are expected to begin to ease only from the start of 2023. So we have another six months at least of high module costs – up a third presently from 2020 values, though exact values depend on which market.

As for global annual solar installations, our figure for 2020 was on the higher end compared to others, at 146.5 GW, and we expected earlier this year that 178 GW would be installed, with some 200 GW of demand falling foul of physical and financial polysilicon limits; then as the shortage became more severe, we had to cut that expectation to 160 GW.

Consequently 2022 may see the largest year-on-year global increase ever, since demand will be heading towards 300 GW and the supply of polysilicon, plus non-silicon PV module supply, should easily pass 200 GW – maybe 220 GW is the final figure for 2022 – watch out for a next forecast in January on this.