McKinsey shows us graphically how rich renewables are going to be 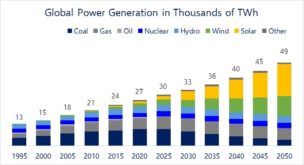 One of the values of a global organization like McKinsey, the management consultant, is that very fact – it IS global, so when it comes to producing figures around the energy market, specifically the energy generation market, which is notoriously conservative and hard to get data out of, there is a very good chance that its numbers are accurate – at least we have no problem with its’ data.

So when we saw a graph published this week in the McKinsey Global Energy Perspective 2019 which looked something like the graph below (it was not possible to cut and paste it so we recreated it), it made us stop and stare.

Take a long look at this graph and realize that it shows how the world generates its power, measured in TeraWatt Hours per annum. Now assume you are an investor and look at the technologies that are growing and those which are shrinking. Good pointers for investment decisions.

Clearly it is not a good thing to be an investor in coal, and gas is flat at best, while oil is shrinking rapidly and nuclear has clearly become too expensive, finally hydro has perhaps reached its maximum in terms of sensible opportunities, already taken.

But those tiny green and yellow slivers that first appeared in 2010 look like turning into goldmines in the next 30 odd years, when they dominate the landscape. Who says? Well McKinsey asked everyone it consults on for energy, mostly electricity generating companies and manufacturers. It consults for many major oil and coal companies too.

Are the global community of extractive industries out of step with renewables? Well it looks like the answer is partly yes and partly no. It is true that the extractive industries have had a love hate affair with renewables in the past making investments in renewable energy to cover their bets, and then abandoned them in favor of finding more reserves, because they felt that would better serve their share price. But today many of the deals we see crossing our desk at Rethink Energy (part of Rethink Technology Research) are backed by familiar names from the generation business, and soon you might expect to see renewed interest from the businesses of mining and oil.

However it is not a slam dunk that the BPs and Aramcos of this world can stand shoulder to shoulder with EDF or Duke Energy, and it is not even clear that those power generators can compete with start-ups, nowadays funded by private equity, suddenly very hungry for this sector. But of course this is a slow business, as much as this graph shows that it is a very certain and deliberate and financially rewarding business.

So if by 2050 we will see 60% plus of global power generation coming from renewables, then someone will have to own those installations and private equity will need to eventually exit their positions once stable, in order to make money. Who they sell too will decide who owns the next power generation industry.

Today, investment takes the form that a generator agrees to buy energy at a given price, an integrator gets binding quotes on the land and permissions they need for say a solar farm or a wind turbine farm, and the equipment they will need to purchase and the work that it will take to get it up and to run it. When that is all in place they bang on the door of a private equity and offer a guaranteed return and the PE team rips their arm off in a rush to pay them funding.

The renewables firm and the PE group jointly own the stock. If later solar panels or wind turbine technology improves, they replace key components, and simply make more money than planned by making more electricity. They take uncertainty out of the equation using energy storage of some description, and as price parity approaches (Wind can already be cheaper than anything but Coal and Solar will soon cross that line) there is nothing left to argue about.

So despite the fact that coal, gas and oil pollute the local water supplies, use up vast government subsidies and are taking the world to the brink of species extinction, including ours, they will soon have little going for them, such as being cheap or belonging to businesses which are cash rich.

The extractive industries are addicted to continuing their habits, and governments are for the most part committed to allowing them to ride roughshod over common sense and local communities. By 2050 that will be a thing of the past, but if they fail to see the warning signs that renewables is now up and running and the best game in town, they will be unable to shift their revenues fast enough towards renewables in order to remain relevant. Clearly the message from McKinsey is that it is time to climb onboard.

What has come about after 30 years of climate change science, story after story of desperation and safety failures in the oil industry, is that the average man in the street finally gets it. They want to see a transformation and this is now being reflected in the minds of the executives running power generating firms, who tell McKinsey that their plans include a lot more Wind and Solar. We can finally say to the investment community, come on in, the water’s fine in renewables, except of course for the USA, the second largest polluter after China, where it has tariffs on the world’s cheapest solar panels to prevent it jumping on board as fast as it might otherwise. But that’s another story.